Pirate Aspects for the Animist Base Class

Pirate Aspects for the Animist Base Class 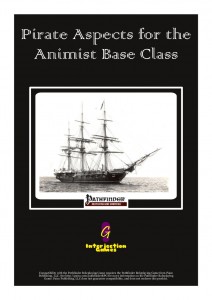 This free expansion for the animist base class clocks in at 1 page front cover, 1 page SRD, 1 page content, so let’s take a look!

Okay, we begin with the parrot major aspect – and it’s hilarious. No, really. I mean it. The base ability makes you fluent in a language you have heard during the last week – but only in a squawking, parrot-like voice laced with pirate slang. Better yet, you can throw a barrage of squawking expletives and insults at foes to demoralize them. The more prominence in the ability, the more languages you get and the better you are at being a sailor. Higher prominence increases the duration of the demoralize effect and allows for self-healing when consuming a herbivorous meal (thankfully with a daily cap), adds damage to the demoralize effect (even bleed damage!) and allows for the better coordination of others when pertaining sailing. Oh, and you can grow parrot wings. Obviously. Captain Black Parrot, scourge of the seas! … Yes, I am making this character for my next pirate-themed module…

The pdf also sports 3 minor aspects: The barnacle penalizes grapple-checks attempting to break free of the animist, the carrageen lets you ignore mucky or swampy difficult terrain and the seagull allows for swift action steal combat maneuvers…with a bonus for the shinies, a penalty for other targets.

Editing and formatting are top-notch, I noticed no glitches. Layout adheres to Interjection Games’ two-column b/w-standard and the pdf has no bookmarks, but needs none.

This free expansion by Bradley Crouch is awesome – it’s hilarious for the parrot aspect’s write-up alone and while the minor aspects left me pretty unimpressed when compared to those of the base book, the fact remains that this is FREE. It costs zilch, nullinger and as such is a cool, free expansion for the animist – one you particularly can’t afford to lose when playing e.g. a Tulita animist captain or a similar seafaring scoundrel. 5 stars + seal of approval for a great, free product.

You can get this cool pdf for FREE here on OBS and here on d20pfsrd.com’s shop!
Endzeitgeist out.