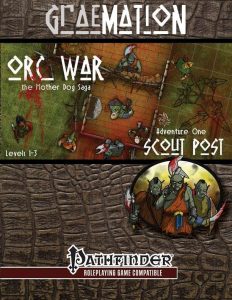 The first adventure of the Orc War-series clocks in at 25 pages, 1 page front cover, 1 page editorial, 1 page SRD, leaving us with 22 pages of content, so let’s take a look!

Now, before we take a look at the adventure, let us first talk about the supplemental material herein: The pdf devotes 7 pages of its content to 1st-level pregens, all of which sport decent full-color artworks as map tokens. They come with 2 pretty generic roleplaying traits and a “negative” – a roleplaying quirk, if you will. Unfortunately, the pregens stats deviate in some ways from standard formatting: Spells are not italicized and while I like that the pdf lists abilities, making them a bit more detailed would have helped. E.g. the “helpful” half-elf traits lack the “immunity to sleep”-note, which is game-relevant. It’s a decent idea, but execution is not consequent. Same goes for the abbreviated familiar stats, which sport numerous errors, provided they’re based on the default toad stats.

The pdf introduces rules for a new skill Orc Smithy, which works sans forge to make ramshackle, makeshift weapons and armor. No precise rules are given for how much material you require to make a given item. The skill even fails to specify the governing attribute. Not usable as written. The pdf also introduces savage weaponry. These weapons have sharp stuff added – per default 4, 6 or 8 arrows, per the respective weapon-size. How exactly? No frickin clue. “To prep a weapon, it takes 4, 6 and 8 arrows for a weapon of comparatively small, medium or large, and 5 minutes.”[sic!] Rules-language this is not. A weapon thus prepared, in whatever way, inflicts +1d4 additional damage on the first two attacks with it. Misses count. The notation of the bonus damage violates PFRPG-formatting conventions and fails to specify its type. Also, RAW, bolts etc. cannot be used. Only broken arrows. Also, fails to specify how this damage behaves on crits. Non-operational.

All right, so let’s move on to the adventure and see if it fares better than the crunch. From here on out, we’ll have SPOILERS. Potential players should jump to the conclusion.

All right, still here? The little Jaggard Isle, setting of this module, sports one city, one village and a couple of hamlets “The West Coast holds the ruins of a long lost population.” [sic!] – I am pretty sure that’s supposed to be “civilization.” The adventure begins as the PCs are awaiting their breakfast in the Mourning Shade Valley Hamlet – which would be as well as place as any to note that the pdf sometimes capitalizes things that shouldn’t be capitalized – like races, classes, etc. The PCs are told to go to a remote farm, meet up with a deputy and secure the place…killing all orcs they encounter. While the pdf does have (useless) information to be gleaned via interrogation of defeated foes, there is no reward for not killing foes…and the bounty is on orc hands, so yeah – murderhobo-ing.

On the trail to the farm, PCs can encounter find the body of a downed deputy – and after that, the PCs can defeat a scouting troupe of orcs and catch an opportunistic looter (and sucky liar) redhanded. Consequences? well, at least here, none.

After that, tracking the orcs leads to a road block…which is a pretty cool set-up with smart behaving foes…but, alas, the tactics are a bit…oddly phrased. Orcs will charge the party after a volley of javelins in the first round? I’d love to see how that works rules-wise. The final encounter, then, would pit the PCs against a small orc outpost – on a nitpicky note, the map is labeled with the “Sub Searents Quarters”[sic!], where the PCs can free a target from the process of body harvesting…and it’s done. The adventure abruptly and suddenly just ends.

Now each of the encounters has notes on how to scale the creature opposition for 1st, 2nd and 3rd level, but this does not extend to DCs. We get 4 orc statblocks and wolf statblock and come with map tokens as well. The orcs all are warriors, so expect not tactical finesse or excitement there. Also: Wolves are Medium, their map tokens, however, are Large – which is frankly wrong.

Now, where the pdf shines would be the maps. The module comes with a 36 map booklet, with the overview maps of all encounters in player-friendly, pretty nice full-color artworks. Where applicable, roofed versions are included for buildings, so you can just “take off” the roof if a PC enters the structures. Better yet, the maps are included in tile-style versions that’d allow you to print them out – and yep, they’re pretty detailed and nice to look at.

Editing and formatting are not up to par on either a formal or rules-language level. Layout adheres to a decent two-column full-color standard with brown background. This is not a printer-friendly module. The map token style artworks are nice enough. The cartography is by far the best part of the offering, in full-color and rather detailed. The pdf has no bookmarks, which constitutes a serious comfort detriment. Finally, read-aloud text is presented as italicized and with a shadow that is somewhat less than aesthetically pleasing.

Grae Hunter’s little module here…is not good. The scaling is not consequent, the encounters are generic, the opposition boring and the module is shorter than most PFS scenarios. If your PCs are halfway capable, you can crush through this module in less than 2 hours. No kidding. If it has rules, it’ll probably have some sort of minor (or major) issue. The new crunch is atrocious and non-operational. Worse for a module with this title, the encounters are bland, and their themes have been done infinitely better in various publications. The module abruptly jump-cuts to black. The foes are underpowered. The story and atmosphere are weak. I have nothing positive to say about any aspect of the module. Heck, the NPC stats managed to fail to cut copy paste the wolf’s stats accurately, missing Perception among the skills. Well, at least it’s in the first block.

That being said, this does have at least ONE thing that *MAY* be worth the asking price. The maps. Unlike the tokens, they have no issues, sport some serious detail and, overall, are well-done. HOWEVER, quite frankly, for the price-point you get potentially more and better maps as well. Still, credit where credit is due. That aspect, at least, is well-done.

Still, I can’t even come close to recommending this very brief and generic module. My final verdict will clock in at 1.5 stars, rounded up ONLY due to the maps included and the bonus that freshman offerings get.

You can get these maps (just assuming you won’t want the module…) here on OBS!