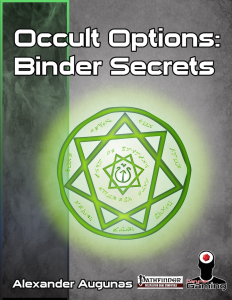 This expansion for Pact Magic clocks in at 10 pages, 1 page front cover, 1 page editorial, 1 page SRD, leaving us with 7 pages of content, so let’s take a look, shall we?

Okay, in case you forgot – binder secrets require you to have an occultist level and can be taken in place of regular feats or bonus feats. This pdf provides 3 special types of binder secrets: Aspects, Alterations and Rituals.

Alterations secrets alter the mayor granted ability of a spirit and increase the number of rounds it is expended by 10, 8 if the binder has the rapid recovery feat. Only one aspect can be applied at a given time.

Aspect secrets modify the constellation or monstrous aspects with the secret’s aspects. a binder can only benefit from a given aspect once, even if she makes multiple good pacts. She can, however, benefit from multiple different aspects secrets. It should be noted that high-level binders can learn new secrets herein to mitigate the restrictions imposed on these secrets.

Rituals take 10 minutes unless otherwise specified and require the execution of knowledge tasks as well as spirits.

All right, got that? Among the aspects, we receive the option to receive aligned strikes and benefit from the associated protection from… alignment’s effects, reduced armor check penalties, healing (thankfully limited to 3+cha-mod times per day to avoid abuse), reroll skills or even gain wings at higher levels! Aforementioned healing can be upgraded by charismatic high-level binder to be usable as a means of raising the dead or to affect an area of targets, btw.

The alteration secrets tend to be more impressive, seeing how they interact with mayor abilities – they including clinging damage for acid and fire-based abilities, the option to exclude a creature type from the effects of mayor granted abilities as well as making mayor granted abilities disruptive. Replacing a mayor granted ability’s damage type with elemental damage may be nice, but isn’t that interesting to me – more exciting would be the option to delay the onset of a given ability – this can *really* change the dynamics of combat and open up some great tactical avenues – kudos! Electricity or fire damage may be supplemented by a dazzle-effect and yes, the obvious choices à la enlarge etc. are part of the deal as well. Maximizing damage against the favored enemy of a given spirit may be a bit hardcore. Also interesting would be the ability to maintain precarious concentration on an ability before unleashing it upon foes, increasing the save DC. Forcing rerolls is also possible and if you can think of one of the regular metamagical enhancements, it probably has a representation here.

Rituals include some of the stars herein -what about a ritual that allows you to take a creature’s soul and put it into a receptacle, forcing it to do your bidding? Yes, this does come with great limits and yes, this is narrative gold for use by both PCs and NPCs. Not all secrets are this cool though – a ritual for a magic circle? Really? Thematically fitting, yeah, but a wasted secret-slot. Some feats granting spell-like abilities to e.g. detect pact spirits or using a constellation’s 1st level patron spell 2/day as a spell-like ability just didn’t wow me. Wildering in the samurai’s class features, granting resolve, is more interesting – especially since the follow-up secrets provide some interesting, varied combo-potential – here, the pdf shines. Scaling summon monster as a spell-like ability didn’t wow me either, but I can see the reasoning behind it. More interesting would be the option to prevent physical contact by creatures of the chosen alignment.

Pretty brilliant is the secret that allows you to choose one spirit and enter a trance to temporarily gain access to the ability traded for the vestigial companion of the spirit. Unbarring class features barred by tunneled lore also makes for a nice benefit. Speaking of interesting – temporarily marking foes as favored enemies of ALL of one’s spirits also makes for a pretty neat ability – though one, which, in spite of its cap, can be pretty nasty. Remember this max-damage-versus-favored-enemies secret? Have I mentioned that marking an adversary doesn’t seem to require an action, nor does it allow for a save? Yeah. Ouch. Of course, pretty regular benefits like +3/day minor granted abilities can be found herein as well.

Editing and formatting are top-notch, I noticed no glitches. Layout adheres to Everyman Gaming’s 2-column full-color standard and can be considered pretty printer-friendly. The pdf has nigh no artwork, but needs none at this length. The pdf comes excessively bookmarked.

Alexander Augunas is pretty much Mr. Pact Magic for PFRPG and, much like Dreamscarred Press’ take on psionics, he is right as the pulse of his subsystem of magic. That being said, I do consider this pdf slightly less than it could have been. The secret-types help provide distinct benefits and the complexity of the wording required for them goes beyond what one would usually have to execute with feats and similar pieces of crunch. It is my pleasure to report that the wording of these abilities flows well – a requirement for this complexity. For yes, this took a lot more time than one would assume to reviews, mainly due to the significant amount of looking up of abilities and their finer interactions I needed to do.

That, and occultists have quite a few abilities with a cooldown – tweaking these can have pretty massive repercussions. Balancing especially the metamagic-like secrets is pretty hardcore and yes, this pdf does have some “OMG, how great is that?”-feats that can truly change the flow of battle. That being said, the pdf also sports a couple of feats I’d consider filler and the favored enemy + max damage combination is pretty nasty and could use some nerfing – guaranteed max damage, even with a 10-round cooldown just doesn’t gel with me and enforces an unnecessary frontloadedness of the binder. One final note – this pdf takes the binder and makes the class, balance-wise, more like a caster. Which isn’t bad, but it’s a change of focus you should be aware of in case you’re playing a low power/magic campaign. So how to rate this? Well, i consider this pdf to be a good addition to the Pact Magic-rules, but not one I can unanimously recommend. Hence, my final verdict will clock in at 4 stars.

You can get this neat expansion for Pact Magic here on OBS and here on d20pfsrd.com’s shop!
Endzeitgeist out.