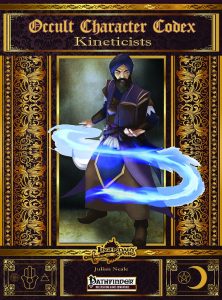 The (for now) final installment of the Occult Character Codex-series clocks in at 32 pages, 1 page front cover, 2 pages of how-to-use/introduction, 1 page editorial, 1 page ToC, 1 page SRD, 1 page blank, 1 page back cover, leaving us with 24 pages of content, so let’s take a look!

The general introduction of how the series works kicks this off – the characters featured herein utilize the NPC automatic progression championed by Pathfinder Unchained, which makes the NPCs used herein more suitable challenges for the PCs – a decision I wholeheartedly applaud. As always, we do receive a blending of common and less common races in the array of creatures featured in the book, with e.g. merfolk being featured among the less common races and there even is a stone giant, a leprechaun and a fearsome hobgoblin featured.

Somewhat odd – the explanation on how to use does mention regular spellcasting in a book on kineticists…a glitch that is even more jarring when one looks at the tactics-section, where hints for the medium are provided. That being said, the section is still pretty useful, with a helpful table of optimum burn helping in running kineticists – kudos for providing such guidelines for the GM. The respective statblocks, just fyi, do feature an “If at optimal burn”-section in the tactics, which is pretty neat to see.

The kineticist, as a class, prior to 3pp-additions, has been pretty challenged pertaining evocative archetypes, so it should come as no surprise that, in this discipline, there isn’t that much variety in this book. A few characters sport a fighter level; there are the uncommon races, but base-class wise, this book is pretty much straight kineticists. The pdf covers the CRs from 1/2 to 19, as always. On a feat-perspective, the book does offer a surprising diversity regarding the feats chosen, considering how few of them make sense for the kineticist, so yeah, kudos there.

Regarding utility wild talent selection and infusion selection, the builds also utilize a sufficient breadth of options. That being said, I did notice a couple of minor glitches in the builds herein – I noticed e.g. minor hiccups regarding the internal rules-language of the kineticist employed in the tactics section – it’s “accepting burn”, not “gaining burn.” Generally, when I could reverse-engineer hiccups, they did tend to be not crucial.

Editing and formatting are good, though e.g. the cut copy paste hiccups regarding the medium are unnecessary. Similarly, the minor wording hiccups and glitches may not be bad per se, but they do show up. Layout adheres to Legendary Games’ two-column full-color standard for the series, with a nice array of original full color pieces. The pdf comes fully bookmarked, though oddly the bookmarks are double – there are WIP-bookmarks and the finished ones. Both are functional, though.

Julian Neale’s kineticists are an interesting bunch – while their builds provide a relatively broad scope regarding the feats and race-combos employed, the pdf ultimately did feel a bit less refined than the best in the series do. At the same time, the support provided by the book makes running the characters themselves somewhat easier than one would assume, which is a plus in my book. All in all, this is a nice, solid collection of NPCs, though one that is less refined than usual for the series. Hence, my final verdict will clock in at 3.5 stars, rounded up by a margin and in dubio pro reo.

You can get these characters here on OBS!
Endzeitgeist out.