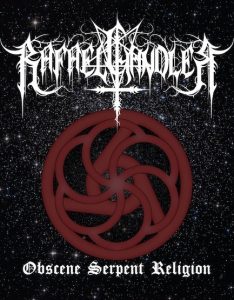 All right, the trope of the serpent cult is probably one of the oldest and most tired ones out there; throughout the pulp genre, horror, etc., serpents and snakes are one of the creepy go-to-critters for evil cults, rivaled only by spiders and bats. At one point, I was surprised to come to the realization that “Is evil, worships snakes”…well, does not really make for a good rationale if you take a closer look.

This is where this book comes in – it depicts everything you need to add some depth to your serpent cult…or constitutes a perfect one-stop-shop package to get a properly detailed serpent cult for your game. That being said, the emphasis here is on EVIL serpent cult. Capital letters. This is not a pdf for kids or the faint of heart: If the cover was not ample cue for you, the very layout and aesthetics of this pdf borrow heavily from black metal aesthetics. This means in particular that, if nightmarish artworks of long-haired dudes, mutilated corpses and ample gore, full-frontal nudity of males and females and drawn depictions of human sacrifice make you uncomfortable…well, then this is not for you. This is very much adult content. I mean, come on, what did you expect? It has “Obscene” literally in the title. If, however, you have a hearty collection of black/death metal cds, you’ll have seen MUCH worse in the artworks and probably appreciate the fact that each artwork mirrors to some extent a style favored in cover and interior artworks of darker metal subgenres. Personally, I can appreciate that…but then again, I have a twisted, dark sense of aesthetics. Speaking of which – the fact that the abbreviation for this book is “OSR” and the black metal font of the author’s name on the cover just add to that very thoroughly constructed overall impression.

All right, still here? Great! The cult depicted herein would be the Circle of Constriction (CoC…get it?) and we begin with the 6 (of course!) commandments of the circle, all of which you could easily poach. Beyond details on worshipping serpents, revering art and uttering sibilant holy tongue twisters (several provided!), these generally make sense from a dark and twisted way: “The Goddess is mother and murderess, holy above all others. The Goddess slithers through endless rain in a paradise of wounded birds and slow rabbits, her realm populated by children stillborn by umbilical strangulation…” Yeah, told you I was not kidding when I said “dark.”

6 sample identities of the Goddess are btw. provided, though you can easily mix and match – from Cihuacoatl to Ningishizda and Renet, the entries themselves are similarly well-written. The faith must go further than commandments, obviously – thus, 6 tenets of the faith are provided, the first of which would be the self-injection of sweet nectar, a draught created from the willingly granted blood of sentient serpents that can provide a variety of benefits, depending on snake type: Adders extend threat range to 18+; Mamba can deliver 2/day poison bites, while Diamondback injection enhances saves.

Obviously, ophiophages need to be killed and a proper devotee must walk the gallery in the halls of undulation. Oh, and serve Saint Siavaca, perhaps the most nightmarish of beings herein: She had her arms and legs surgically removed and now moves by means of a serpentine harness of steel; she also had her jaws broken and reset, with metal fangs inserted. She subsists on a diet of heretics and infidels and new members must guard her while her hair is shorn or while she feeds. And yes, one artwork depicts her in her horrific glory, directly under a gutted corpse of an unfortunate victim…

The completion of the quests of the hexagram may hold ritualistic importance for the cult or raise one’s standing within it, provided deep cover (or a very twisted campaign) is what you’re going for: These include the theft of organs, lethally forcing a serpent into the body of a heretic in a public place (and getting away alive…), plunging someone into the darkest depths of despair, preventing the birth of children destined for greatness/goodness…yeah…have I mentioned that this is a toolkit to make a really EVIL serpent cult? Beyond these quests, the pdf also sports a brief 2d6-based mission generator: Roll 1d6 for the first part, 1d6 for the second, there you go.

A total of 6 sites of religious importance for the cult, from a snake-men village to the lair of the fabled True Hydra and the Glade of the First Kill, the places evoke a sufficiently dread sense of foreboding. But why follow the Goddess? Well, a total of 6 powers can be found here: The first lets you animate organs of corpses, which act as ambulatory spies (told you: Gory!), gaining scales…or a hiss that prevents any lies. Questions answered with it must be answered truthfully…if you’re a mammal. Transmitting brief messages via a quasi-telepathy and decapitating victims, looking into their eyes and discerning some truth from that. Yup.

With 4d20, you can generate name, surname, epithet and situation of serpent cultists on the fly. Another sequence of 3d6 lets you generate encounters on the fly. The pdf also provides the benefits of imbibing sable nectar, sweet nectar mixed with the blood of a half-serpent being (like a medusa etc.) – this draught can have unpleasant side-effects, but may provide a total of up to 10 different bonuses, each of which lasts 1d6 hours.

Where there is orthodoxy, there must also thrive heresy; even in an admittedly twisted serpent cult. In this case, that would be the existence of Scarlet Nectar – it is sweet nectar mixed withs erpent blood, lasts 1d8 hours and has a benefit depending on the snake used: Pit viper blood nets you the ability to detect body heat up to 100′ away, while mangroves render you invisible while in a tree.

Finally, the pdf does contain a new creature, the skin vessel: Skins of powerful persons who are filled up with serpents alongside thin tubes, animating the horrific conglomerate. More alien, these things, usually little more intelligent than zombies, sometimes gain sentience…and have a habit of believing people to not be real…though they’ll happily talk to your skeleton or organs…which need liberation in the eyes of many of these grotesqueries.

Editing and formatting are pretty good, though the rules-language, in spite of being intended for LotFP and similar retro-clones, could be a bit more precise. The 2-column-layout is peculiar: Following the Black Metal booklet aesthetics, the presentation of the text leaves quite some space at the top and bottom of the page, so yeah, not the printer-friendliest file to print out. The cover is provided as a separate .png. The b/w-artworks are pretty impressive if you have a penchant for dark and disturbing imagery, even more so if you have a decent black/death metal collection – each artwork quotes a certain CD in motif, aesthetics or composition. So yes, this very much is a kind of concept-pdf. The electronic version comes fully bookmarked with nested bookmarks for your convenience. I don’t own the PoD-version of this one, so I can’t comment on it.

Rafael Chandler’s “Obscene Serpent Religion” is very much a well-written excursion into a nightmarish serpent cult. Next time your jaded players yawn at a priest of Seth, are bored by yuan-ti, snake-men, what have you…or even contemplate that these guys aren’t so bad…this is your toolkit. From the villainous quests to the disturbing practices, this makes snake-cults EVIL again. Not “slightly edgy and misunderstood”, frickin’ depraved and EVIL. Capital letters.

Oh, and there is another thing:

This is “Pay what you want”.

If you end up being offended, you can simply delete it, but if you’ve read this far, you’ll probably have figured out by now whether or not this could be for you and your group. It should btw. also be noted that the lulu-PoD is REALLY cheap – it is an at-cost offering that nets 0 profit. Personally, I wholeheartedly believe that this worth a tip. It may not be for everyone, but if you’re not faint of heart, like the visuals and want to make a serpent cult appropriate for really dark fantasy or horror…well, there you go, this does a fantastic job at the task at hand. Just keep it out of kid hands and if you’re easily offended or disturbed, do yourself a favor and skip it.

With this toolkit, you’ll be good to go. Now if this was a commercial venture in the traditional sense, I’d probably go for something in the 4.5/4-star-range (with the caveat to beware due to the explicit nature), but considering that this is Pay What You Want, I absolutely will round up and give this a small bonus. Hence, my final verdict will clock in at 4.5 stars, rounded up.

You can get this pdf here on OBS for PWYW – and it’s worth a tip!

If you really like it, here is the at-cost, inexpensive print version on lulu!