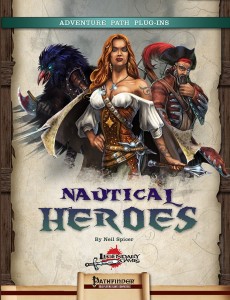 This collection of pregens clocks in at 42 pages, 1 page front cover, 2 pages editorial,1 page ToC, 2 pages of introduction, 1 page SRD, 1 page advertisement, 1 page back cover, leaving us with 33 pages of content, so let’s take a look, shall we?

As always, we get the pregens presented herein as 20-point-buys, though advice for modification down to 15-point buy is provided for each character. The character itself is always presented not only with basic stats, but also a gorgeous artwork that represents the character alongside a nice in-character quote that helps get in the spirit of the character- layout-wise, the presentation here is great: Page 1 presents aforementioned artworks and quotes, whereas the second page covers the statblock of the respective character alongside the basics of physical descriptions etc., which continues on the third page. there, on can also find excessive advancement-advice for future levels of the respective builds. Finally, the 4th page also provides advice for the players to properly portray the respective characters. This decision may result in some blank spaces on some pages, yes, but it does make it very easy for the DM to print and hand out characters to the respective players.

So what are the characters herein? Well, for once, the first, right out of the box, would be a swashbuckler – yes, this pdf does have full-blown ACG-support and Aethan, the noble and romantic swashbuckler, makes for an interesting and fun leader for a respective group. Cathran, a beautiful cleric of Desna would be next up and yes, there would also be a halfling sea-singer and an elven sea witch, which, of course, also comes with a fully depicted familiar.

Now so far, the choices have been pretty much what you’d expect, but introducing an undine flowing monk into the fray imho is an interesting choice for those who prefer more uncommon races. Skull & Shackles is one of the APs wherein playing an evil character is pretty much supported and Evon Bloodbeak, the aptly-named tengu-rogue (swashbuckler) does cover this niche admirably – without overlapping with the ACG-swashbuckler regarding the build’s focus, mind you.

Using age as a nice way to modify a character, a peg-legged oracle (with a smart focus on terrain-control and social skills) can be considered yet another interesting build. Of course, no Skull & Shackle-prgen collection would be complete without a gunslinger (buccaneer)…

The pdf’s final page is devoted to foldable paper miniatures of the respective characters for use with battle maps.

Editing and formatting are very good, though not perfect, with the most hilarious glitch being the language “polyglut.” Layout adheres to Legendary Games’ beautiful standard established for Skull & Shackles plug-ins and the copious artworks are beautiful indeed – with the exception of the undine, the artworks have, to my knowledge, not been used in other LG-supplements – and overall, are top-notch. The bookmarks suffer from a weird glitch where the first couple of them are missing and then, some do not read like character names, while others do. Rare rules and uncommon pieces of crunches have unobtrusively been hyperlinked to d20pfsrd.com.

Neil Spicer’s nautical heroes are AWESOME as pregens. Why? because they not only get the theme right from the get-go, they also generally adhere to the same level of optimization – none of the pregens felt overpowered, with all sporting some definite roleplayer’s choices, while at the same time remaining competent at what they set out to do.

The AP’s focus on naval combat offered a further potential for problems – namely naval combat and siege weapons – instead of shoehorning a 1st level character into such a role, the pdf wisely opts out of this in favor of putting such decisions into player-hands – you won’t find the one siege-guy herein, or the one navigator/look-out – instead, you have aptitudes, yes, but not ones that lock you into an option.

While the minor glitches here and there and the minor bookmark hiccup are unpleasant blemishes, overall, I still absolutely adore these pregens and their general balance. My final verdict will hence clock in at 4.5 stars, rounded up to 5 for the purpose of this platform.

You can get this nice collection of piratey pregens here on OBS and here on d20pfsrd.com’s shop!
Endzeitgeist out.