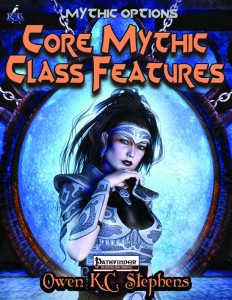 So what are mythic class features? In a nutshell, they are the upgrades of class features, count as 1st tier universal path abilities and can be taken in lieu of a mythic feat. They require a character to have the base class feature to take them, so no weaseling around the prereqs. Simple, right? Yeah, thought so too!

This pdf then goes on to present the mythic upgrades of class features for all the core classes – and yes, if you already have a certain pdf that does just that for the rogue, RGG has you covered and you should have received this – which is downright superb customer service indeed!

The Barbarian, for example, covers a vast array of rage powers with mythic upgrades herein -which e.g. include extending fearless rage to allies and also interesting rules choices that go beyond what one normally can execute – adding via Mythic Quick Reflexes a second AoO, tier times per rage, to the attacks executed against a target for moving out of the barb’s space, for example, is a very interesting instance where the rule of maximum AoOs is broken in a controlled and interesting manner – nice!

Now the capstone Mighty Rage may be a bit much – autoconfirming all crits in rage and, with mighty swing, declare one hit to be a crit per rage is pretty nasty…but then again, that is 20th level mythic gameplay…Still, very much feels like a bit too much to me – also since it kind of points you towards high-crit-builds, which isn’t necessarily the direction one would expect from a barbarian.

The bard’s mythic class features obviously cover the performances and adding breath of life to the soothing performance should be commended here – neat one indeed! The high-level jack-of-all-trades, which provides tier as ranks in all skills can be considered another very powerful example – which I generally LIKE for the bard – it fits. But at the same time, the existence of this ability somewhat invalidates spreading skills for other classes, so not sure whether I’m sold on the unlimited nature of this one’s execution. I think, I would have gone for a tier-dependant wild-card with tier- or power-based uses instead.

Clerics can have their aura enhanced to provide SR against one of the opposing alignment components – which makes sense in so many ways, it’s not even funny – kudos! The different domain powers covered are neat as well, though a typo that confused “attach” with “attack” had me stumble for a second. I also don’t get why the air domain, which grants mistsight by anything but the mentioning of murk, does not simply grant this mythic ability – introducing this second set just causes potential confusion between the two. And yes, this is me being a nitpicky prick, I know.

Druids can have mythic abilities added to their companions and even receive a temporary feat of the form the druid chooses to wildshape into – the latter being at once awesome and very powerful – but here, I am not complaining, since the design decision just makes all kinds of sense to me. Timeless body, while not that game-relevant, should also be commended – amping up a lifespan to almost a millennium? Heck yeah, hugging trees suddenly sounds so much more compelling! ;P (And yes, the Monk’s timeless body is different and less potent – though I do think, streamlining them into the same ability wouldn’t have been unreasonable – think of the myths of the longlived, mystical senseis…)

Mythic fighter and rogue class features have already been covered by yours truly, so I’m going to skip them, which renders the monk the next on our list. Here, we have a cool, but also potentially very problematic option – adding additional flurry attacks to the single attack that can be used as an attack action. Yes, this means tier-based scaling of the amount of attacks the monk can execute with one attack – and while the pdf gets interaction with Vital Strike, haste, etc. right, I was still left kind of worried – primarily, because the pdf does not explicitly states that adding the extra attack imposes the penalty of flurrying -it can be gleaned from the context, yes, but still, I feel that the pdf, to avoid misunderstandings, could have spelled that one out slightly clearer. Again, me nitpicking, I guess.

The paladin’s features provide a neat set of numerical escalations, with especially receiving the archon’s aura of menace, powered by mythic power, being pretty cool – especially, if you’re thinking about some angel-specific feats and tricks that could be used by the paladin this way…just thinking aloud for the eventual release of Mythic Monsters: Angels, mind you! Now free mythic power-based switching of mercies may be a bit too much for my tastes, but depending on your personal preferences, you may not mind that one. Other than these, we have steed-enhancers, increased aura-ranges – all in all, solid, but pretty powerful.

Rangers may 1/day insta-retrain combat-style feats and receive all the numerical boons you’d expect. Here would be as good as place as any to complain about mythic evasion, which allows you to expend mythic power to halve damage you receive. Its explaining sentence refers to rangers in some of its non-ranger-iterations and provides said example: “Thus the ranger could use mythic evasion to halve the damage you take from a poison if he failed his save, but not any damage the poison deals after its initial effect.” Why am I complaining about this? Because it has nothing to do with evasion any more – it’s the evasion-mettle-super-hybrid, usable for any damage source, even those sans save. This is, even for mythic games, crazy strong – yes, it uses a limited resource, but not a particularly rare one. I showed this one to my players and the unanimous consent was that the ability would be pretty much a must-have trick for the eligible classes – so many ways to avoid death. Note: If you do allow this ability, I’d strongly suggest from refraining to add any item, ability or the like that can store mythic power for further use. (Yes, they exist…) Why did I not complain about that for the rogue? Because the rogue can use the ability. Same goes for the monk. But the ranger? Here, a more limited ability would definitely have been in order! On the plus-side, the rogue’s mythic sneak attack now is streamlined and unambiguously functional.

The Sorceror’s mythic bloodline ability deserves special mention in my book, mainly because it does provide you a formula that can be utilized to add it to bloodlines not explicitly used in this pdf – these general guidelines are hard to craft and I applaud their inclusion herein. Spellcasting as a defining class feature for wizards now allows for limited poaching in other spell-lists and upgrading spellbooks to grant the benefits of specialists also feels pretty awesome – this makes the trope of the archmage missing his divination book make much more sense… Oh, and generally, familiar upgrades can be considered overdue.

Editing and formatting are good, though not perfect – I noticed a couple of glitches, though none of the crippling variety. Layout adheres to Rogue Genius Games’ printer-friendly two-column standard and the pdf comes fully bookmarked for your convenience. Artwork is thematically-fitting stock and the pdf sports hyperlinks, though oddly some abilities lack hyperlinks to the more obscure (and thus needed) mythic abilities. A minor point, though.

This one’s odd – on the one hand, I wouldn’t want to miss this pdf in any of my mythic games. On the other, I would never flat-out allow all of the content herein. The pdf sports at the same time Owen K.C. Stephens’ superb ability to craft solid rules with gloriously streamlined abilities that can be scavenged to add new pieces yourself, while on the other sporting numerous small discrepancies that add up – mistsight in anything but name may be okay…but why is there this odd discrepancy between the two timeless body-abilities, while the exceedingly strong mythic evasion remains unnerfed for the very powerful ranger-class? (As mentioned above – fitting for rogue and monk…but rangers?)

There are quite a few of these small hiccups here, so much that they add up – but alone, they wouldn’t be considered a detriment. And then there’s the elephant in the room: The simple truth that all of these class features use the same resource – while obviously providing VAST discrepancies in individual power-levels. You can min-max pretty hardcore with this mythic upgrades, with the power-levels ranging from okay/situational/nice to must-have-powerful, bordering on OP, even for mythic games. So yes, I consider this a must-have supplement for mythic rules, but only for the DM, who ought to carefully consider which of these mythic class features to introduce to the game and which to leave out. In the end, this pdf feels like it could have used some more streamlining, an additional editorial pass – as provided, it is a book containing greatness, yes, but also one that remains ultimately flawed with it not even remotely bothering with balancing the class features by the amount of investiture that unlocks them, thus creating a serious flaw in the very basic mechanic underlying these mythic class features. Hence, my final verdict will clock in at 3.5 stars, rounded down to 3, while still coming with an explicit recommendation for the discerning DM.

You can get this essential, but also problematic book here on OBS and here on d20pfsrd.com’s shop!