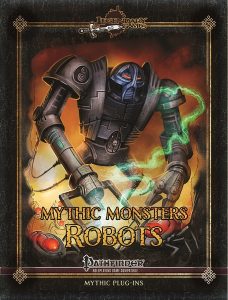 All right, the Technology Guide introduced Cybertech to PFRPG and, fittingly, this installment’s introductory bonus content deals with such options; namely, robotic implants, of which a total of 5 are provided. The first of these would be the cyberlink, which attaches to the frontal cortex (occupying the brain slot, implantation 4, if you want to know) and nets the user telepathy witha range of 120 feet, but only for the purpose of “speaking” with roboters, computers, etc. Cool: This also allows you to remotely access computers within the range without requiring input means like keyboards and the like. Additionally, you may 3/day overwrite a robot’s programming, adding in a suggestion. Damn cool item that can carry a whole adventure, if need be. Magfeet occupy the leg slot and rank as implantation 2 and allow you to gain +2 to CMD when standing upright on a horizontal metal surface. Much cooler, though: They allow you to go all dead space and walk on walls and even ceilings, provided they’re metallic. Yeah, I can see myself using that for some seriously cool encounters.

Also at implantation 2, but associated with the head slot would be the sensory transmitter and featrues basically an antenna, providing a livefeed of visuals and audio information for the wielder at up to 1 mile range. The signal can be picked up with commsets, obviously, and comes with information on how to block it. Cool: Beyond that, the item takes the existence of signal boosters into account – kudos! Subdermal explosives occupy the body slot, feature implantation 6, and makes properly hitting you a nasty proposition for your foe: Whenever you are subject to a non-reach, non-ranged critical hit caused by a piercing or slashing weapon, you inflict 3d6 fire damage to the unfortunate. Oh, and if you die, after 1d4 rounds, you erupt in a 20-ft. 6d6 blast. Yeah, pretty cool. The final implant would be the implantation 5 thought harvester, which occupies both arm and brain slots. The implant provides a needle in your palm that allows you to use it via an attack. On a hit, you inflict 1d3 piercing damage and the target must succeed a Fort save. On a failure, the nanites you injected directly transmit the memories of the subject into your brain, as though share memory was used; memory selection is also covered.

So yep, this time around, the supplemental material is pretty awesome…and they often note from which robots they can be “harvested” as a nice touch. But you’re here for the critters, right? So let’s take a look at those fellows! At CR 2/MR 1, the android would be the first and the mythic iteration comes equipped with a repulsor: 3/day, they can use these as a ranged touch with a 10 ft. reach. Creatures hit take force damage and must save or be knocked prone; expenditure of mythic power increases the potency slightly and adds minor pseudo-splash damage to the effect. Solid. At CR 1/MR 1, the arachnid robot (which comes with a nice artwork) gets a more powerful explosion when destroyed while still retaining mythic power. Additionally, as a unique new ability, they emit arcs of lightning if below 50% maximum hit points in a 15-ft.cone…which adds a fitting, concise theme and unique little surprise to the robot. The CR 4/MR 1 collector robot (first featured in Fires of Creation, if my memory doesn’t betray me) has tracking chips that perform better and are harder to remove and as a standard action, these guys may expend mythic power fire a blast of nonlethal sonic energy at a target, also prompting a save to avoid being stunned…which significantly increases the efficiency of implanting chips, obviously…

At CR 5/MR 2, the gearsman gets more potent charges of his weapon – the unfortunate victim of a critical hit not only suffers from more shock, the electricity may actually bypasses resistances…and potentially thus even dispel non-mythic spell granted immunities to electricity. Additionally, these guys may expend mythic power to significantly increase their self-repair options, using it as a swift action and at no cost towards the daily limit…and it eliminates negative conditions! Finally, the adaptive angle is used in a new ability that makes the robot more effective versus targets that attack it, boosting atk and damage, AC versus ranged attacks as well as doubling the threat range. Awesome upgrade!

The CR 9/MR 4 terraformer robot gets a massive and pretty cool modification: Instead of the standard poison, they may tailor their poison to a single creature type (and subtype), increasing its DC and modifying the effects for the chosen species, but at the cost of decreased efficiency versus others. The damage output of the drill is increased to 2d6/x3 and the damn cool reprogram terrain can by improved as well: Expenditure of mythic power allows these guys to not have the ability uses count towards the total daily uses and further greatly increases the options at the robot’s disposal. Oh, and absolutely amazing: By spending two weeks, they actually can permanently change an area in sensibly defined ways! Have I mentioned that, for 2 uses of mythic power, they can actually duplicate high-level natural disasters via their nanites? Yeah, absolutely glorious critter.

At 1 CR higher (CR 10/MR 4), torturer robots can boost their force fields via mythic power…of, and they may use mythic power to use their interrogate ability to affect non-helpless targets…oh, and they may inject truth serums in targets, which is an ability I was frankly missing from the original creature. Kudos! The CR 11/MR 5 version of the warden robot (from The Choking Tower) not only comes with a cool full-color artwork (one of multiple pieces herein!), he may also boost his intrasonic shields, use his sonic disruptors in conjunction with AoOs and gets scanners that duplicate arcane eye and may analyze metals. Via mythic power, these guys can stun creatures hit…or shift the mode of their armor, temporarily losing light fortification, but gaining a potentially lethal reflexive 15-ft. conical blast when hit. VERY cool!

The pdf also features two robots at CR 12/MR 5, the first of which would e the observer swarm from Lords of Rust; this one may use mythic power to enhance its camouflage. The transmit senses ability has been significantly streamlined and makes now more sense, which would be pretty neat. Oh, the swarm also has integrated laser torches that allow it to cut through obstacles (or enemies), potentially even the hardest ones via mythic power. Reflexive evasion versus AoE effects via mythic power and the option to coordinate for nonlethal blasts greatly increase the flexibility and flavor of these beings. The second robot at this CR/MR is the director, may move while maintaining a grapple and use mythic power to increase the range and potency of electromagnetic pulses emitted, while also retaining its daily use array. Oh, and his force field has fast healing…12. Until you break it down to 0 for the day, that is.

There also are two robots at CR 13/MR 5, the first of which would be the thought harvester. These guys may supercharge their shots to deafen targets and use mythic power to boost his force field and once these guys have your memories, they may access the information…again and again. Which makes sense from an internal cohesion point of view, as well as from the perspective of narrative options. Speaking of which: They actually may implant memories. Alternatively to the thoughts, they may also inject Dex-damage-causing numbing agents (that also act as an anti-pain-buff), with mythic power to create more doses. Oh, and for 2 mythic power, they can enter stealth-mode: Combined silence + invisibility. NICE! The myrmidon would be the second robot at this CR/MR and they are…painful: 3/day they may fire a combined dispel magic/disintegration, with mythic power as a flexible means of upgrading either spell effect. They may boost their force field. Speaking of which: They may willingly incur damage to the force field (or electricity damage, in absence of a force field) to further enhance their offensive capabilities…oh, and they may actually quantum shift teleport, potentially flat-footing foes. Oh, and they may see invisible creatures and can use mythic power to maximize their rockets. Yeah, these guys can SHRED even mythic characters…which is exactly what they’re supposed to be capable of!

Speaking of shredding foes: The pdf also features the CR 20/MR 8 annihilator robot: These guys may, as a free action, use mythic power to increase all their save DCs by half tier (OUCH), boost the power of their force field, deafen, sicken and stagger foes in a huge area and they add half tier to saves. They may overload their plasma lances to continue to inflict damage (and increase it!), but at the cost of a cooldown, forego melee attacks for better ranged attacks…and use mythic power to automatically dispel non-mythic magical and technological affects…so yeah, an appropriately lethal engine of destruction.

The new critter herein is actually a kind of update – at CR 1/MR 1, we get the cyberphrenic tadpole, first featured in “The Mad Doctor’s Formulary”; the mythic iteration grants the creator status and share senses as if it were a familiar. The telepathic relay may also be used more than once per day, with mythic upgrades possible. When it would be destroyed and still has a mythic power, the tadpole may insert a half-strength replicant in the host body…so yeah, amazing upgrade of an already very, very cool low-CR-critter that is truly useful.

Editing and formatting are very good, I noticed no significant hiccups. Layout adheres to legendary Games’ two-column full-color standard and the pdf sports several new, unique artworks for the robots; not all of them, but there are a couple of nice iterations. The pdf comes fully bookmarked for your convenience.

Alex Riggs, Russ Taylor and Jason Nelson had an interesting task here: Robots are created and as such, their abilities must make sense to some extent and feel like they effectively supplement the function of the robot. At the same time, adhering too strictly to these aspects may make builds predictable…but you have to have some consistency regarding the options. The force field overload and variations of the overcharge-modes for several robots herein achieve exactly that; they establish a cohesion in design and at the same time do unique things with the options available. There is some serious consistency in the quality of the mythic upgrades, with only the android falling slightly short of the sheer amazing creativity oozing from these robots. In fact, e.g. the observer swarm, whose vanilla build imho failed at its intended raison d’être, is now excellent what it’s supposed to do. Similarly, the sheer potency of these robots, their built-in phases/modes etc., all that helps making them excellent bosses to challenge veterans…or, obviously, mythic characters. Anyways, this certainly is one of the gems of the series and considering the exceedingly high quality of the Mythic Monsters-series, that’s meaning something. I am often saying that this series really spoiled me regarding bestiaries…and pdfs like this are the reason. Excellence, from start to finish, well worth 5 stars + seal of approval.

Say it with me: “EXTRERMINATE!” – now get these robots here on OBS!