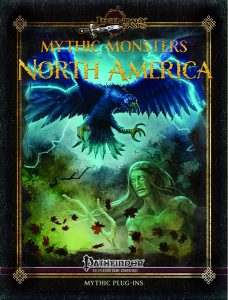 We, surprisingly, begin this pdf with supplemental material that is not only useful for mythic contexts per se – the pdf introduces Scrimshaw items as an item-class, with a respective feat to fashion these (though it oddly does not have the Item Creation descriptor, but that just as a nitpicky aside) – scrimshaw magic items, though, are rather fragile – and this fragility is a central focus of the respective items introduced: E.g. a knife that returns those slain with it as undead servitors, which is balanced via the chance of splintering. The pendant of life sense can help communicating, but excess damage to the target depicted in the pendant can result in a collapse. Whalebone Helms can emit thundering cones and emit high-pitched cries that allow for long-range communications…I like this general item-class and the guidance provided for the GM is nice. The class certainly has some serious potential for e.g. an ice age-themed game.

Beyond these items, the pdf obviously also contains a selection of creatures – the CR 16/MR 6 version of the Akhlut can instantly generate devastating storms and add devastating takedowns of the assaults…and it also learns to perform truly devastating smashing assaults and fly during storms…oh, and they become gargantuan. A true classic would also be the CR 10/MR 4 Jersey Devil – this being receives an AoO as a result to mythic power expenditures and may even expend mythic power to assault foes…and it actually gains temporary mythic power when targeted by an appropriate hit. Adding a curse-debuff to the breath…and the version may combine the breath via trampling for ghost rider-style running over…oh, and it finally is as hard to kill as befitting of the legend.

The CR 7/MR 3 mythic hodag not only gains better ambush predator tricks and may execute devastating attacks from below…and these guys are incredibly hard to hunt down, making for deadly hunters. The mythic ijiraq at CR 11/MR 4 may banish foes affected by the disorienting gaze into the plane of shadows and the constantly blurred form adds a significant defense upgrade to the critter. Nice one!

At the highest echelons, the mythic manitou receives a CR 18/MR 7 incarnation that has a powerful domain of guarded lands and also sports a powerful aura of karmic retribution aura, which can negate the defenses of foes foolish enough to attack him…oh, and he may possess foes! Beyond this, powerful clouds of steam and an improved spirit stampede and a mythic power expanded token of fortune is pretty intriguing. (Oh, and the Mythic Awesome Blow feat is reprinted here for your convenience!) So yeah, a great one!

The pdf’s next critter would be the CR 9/MR 4 qallupilluk, who gains grasping claws, seriously powerful additional options when the creature hits multiple times with its claws, and may tunelessly hum to lead its victims astray as well as employ with deadly hexes. There is yet another critter – the sasquatch, at CR 3/MR 1 receives the blurred form trick and also receives a particularly nasty stench. At CR 4/MR 1, the snallygaster receives a horrific shriek…and once again, the mythic Flyby Attack feat, used in the build, is included here.

The most American of critters in iconography would perhaps be the thunderbird at CR 13/MR 5 – these beings may not only absorb lightning, they can actually assume lightning form, a reflexive electrified body and is particularly effective in combat versus serpentfolk and similar reptilian threats. And yes, the mythic version can use mythic power to greatly enhance the signature storm aura…and I should also note the ability to fire whole salvos of thunderbolts! Amazing! The tupilaq’s mythic version, at CR 8/MR 3, can have spells inscribed upon it and with blood of a victim, can become a deadly, unrelenting bloodhound – and yes, these base creature abilities become even more potent in the mythic version, supplemented by better physical power and feats. Nice representation of a construct being created to fulfill certain functions.

The wakandagi, at CR 17/MR 7, is surrounded by an aura of toxin-cancelling purity and may counter the first attack each round, form the weather and utterly obliterate ships…so a massive upgrade for the base creature, which always felt a bit limited to me – big, big kudos! (Mythic Multiattack is reprinted here as well, as it is used in the build!) One of the most epic builds in the whole series is next – and it better should be: The wendigo has been done often in various iterations, but the CR 21/MR 8-version herein is a true beauty of utter, deadly destruction – exceedingly fact, with the option to instill wendigo psychosis via nightmares, and absolutely phenomenal evasion tricks, these guys can actually stand before high-level mythic PCs – wreck them; hit and run; drain mythic power – the signature abilities span two pages on their own, making this build a glorious story-foe and villain.

The CR 5/MR 2 wikkawak gains mythic power from making creatures frightened and, on crits, these guys can take mementos from crited foes, which thereafter make the creature more deadly against the being in question. Oh, and thuggery is enhanced as well!

The new creature herein, lavishly rendered in full color, would be the CR 6/MR 2 Giiwedin, an incorporeal undead with the air and cold subtypes – these beings can possess others, wracking them with spellblights and hampering the healing options of the character in question…and those slain return as frost wights. Spirits of those slain in the frozen tundra, these hunters are delightfully deadly, if not absolutely mind-boggling in their options, but their strong and evocative theme makes sure I’ll certainly use them in my adaptation of LotFP’s excellent “Weird New World“.

Editing and formatting are top-notch, I noticed no serious glitches. Layout adheres to Legendary Games’ two-column full-color standard and the pdf sports pretty amazing original pieces of artwork. The pdf comes fully bookmarked for your convenience.

The mythic monsters featured herein, penned by the veteran hands of Jason Nelson and Alex Riggs, count among their number some of the coolest critters in the series…and indeed, not one of the conversions has disappointed me with its tricks; they build expertly upon the mythological foundation of the respective creatures. The mechanics are similarly excellent and manitou and wendigo alone may well be worth getting this file on their own. In short – this is an excellent addition to the Mythic Monsters-series and thus receives my highest accolades at 5 stars + seal of approval.

You can get this amazing Mythic Monsters-book here on OBS!