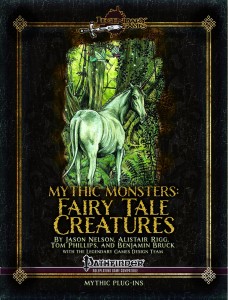 As has become the tradition with Mythic Monster-pdfs, we begin with supplemental information – which this time comes in the guise of mythic versions of fairy-tale associated spells – the call woodland beings variants and the faerie form spells and even the rather iconic fey crossroads spell receive a vast plethora of additional options, not only in the context of the mythic variants provided herein – two thumbs up!

Now the meat, of course, would be the fairy tale creatures provided herein -first f which would be the Mythic Banshee at CR 16/MR 6, who not only receives enhanced sonic tricks, despair-causing anguish and the like – she also gets an ability most iconic – conjuring forth a massive, spectral carriage to assault foes with! The creature is a superb example of the best in mythic monster design – taking all those iconic options and unique signature effects from mythology and making the creature truly distinct. Oh, and the mythic wail of the banshee is thankfully just as lethal as it ought to be!

At CR 12/MR 5, the mythic Boogeyman is a terror to behold as well – quite literally, for non-mythic creatures better gear up – immunity to fear may just disperse…Oh, and have I mentioned the great potential for rejuvenation? If you require more inspiration, combine this with the fluff of 3.5’s “Dark tales”-Ravenloft-sourcebook for adventure ideas galore.

In direct comparison, the CR 3/MR 1 mythic faerie dragon feels a bit less iconic – yes, suggestion may be nice, as would be the euphoria-inducing bite, but compared to the former two, it still feels a bit less inspired than it could have been. What about more illusions and similar prankster gambits? Especially since his brethren, the CR 3/ MR 1 Leprechaun with his memory lapse, hideous laughter etc. causing babblings and daze-causing shillelagh proves that the Legendary Games-team can make awesome low CR/MR-creatures with unique mythic signature abilities. Mythic Pixies would be another example here -at CR 5 / MR 2, these fellows can generate flying dust (à la Tinkerbell), illusory decoys and also receive better arrows – cool!

The CR 7/ MR 3 Mythic Green hag is once again back to form – enhancing the fearful cannibalistic notions of the base creature become grand stalkers that also can consume the dead or helpless – a terrifying prospect indeed, even before taking increased coven magic prowess into account – awesome and much closer to what the creature ought to be able to do. At the same CR/ MR, Mythic Redcaps, bitter and blasphemous and full of hatred for thieves, these guys are deranged slayers that neatly tie bleed with the theme of their caps – and if you require inspiration for these fellows beyond the cool abilities they receive, let me recommend “Van Richten’s Guide to the Shadow Fey” – another true gem of the 3.5 era that ranks among my favorite fey-related tomes ever. The Will-o’-wisp, at once again CR 7/ MR 3 receives the power to shoot electrical arcs (THANK YOU – Will-o-wisps sans these feel incomplete to me…) and their increased lure options also feel nice, but still – these guys feel like they could have used another ability – while I love that they can eat e.g. rages and effects the like, actually using these to fuel some other abilities would have been the icing on the cake.

Now, sometimes you just want an endgame killer – so what about a CR 28/ MR 10 Jabberwock receive even more deadly options (like tail sweeps), lethal average damage outputs further increased by the option to SKIN GRAPPLED PEOPLE ALIVE and healing resistant wounds – urgh. Ouch. Beautiful, deadly, all I want from such a beast, including an updated fear of vorpal weapons.

The CR 18/ MR 7 Mythic Jubjub Bird may spring attack with full attacks thanks to mythic power and is lethal in its own right – these harbingers of slaughter are NOT to be crossed lightly. Oh, and their shriek actually can kill foes via sonic damage and much like its jabberwock brethren, it features planar acclimatization.

Mythic Unicorns at CR 4/MR 1 receive an aura of purity and receive an increased healing option via their horn, learning to use mythic power to apply mercies. Per se, there is nothing wrong with these fellows, but I still would have loved this to go slightly further – perhaps it’s due to Middle Ages Bestiarium correlations assigning the unicorn with the figure of Christ, but I always felt the poor creatures could have used more abilities to represent their unique natures. Perhaps it’s also due to the romantic in me still getting a bit teary-eyed at “The Last Unicorn” – I don’t know. What I do know is that I prefer this unicorn over the non-mythic one and wished it had gone even further.

EDIT: It seems like my file was, once again, not properly updated on OBS. The revised version that since then has found its way into my claws also sports a true beauty of a statblock – the frumious bandersnatch at CR 23/MR 9. If you thought bandersnatches were bad news – wiat till you have these guys at half hp and they BURST INTO FRIGGIN’ FLAMES! The beast’s entry spans a massive 2 pages and provides a big bad brutal beast that will send characters (and potentially their players) whimpering!

And now, the creature we’ve all been waiting for – this installment’s unique, new creature, the Boojum Snark at CR 10/ MR 4.- these creatures are part walrus, from the hip downwards look like tentacles of giant squids, live in hermit crab-like shells and can be charmed easier by SOAP. Oh, and their gaze can send you towards the realms of the fey. See, THIS GETS fey; The creature is evocative, weird and the full-page artwork reflects that just as well as the stats.

Conclusion:
Editing and formatting are top-notch, I noticed no significant glitches. Layout adheres to legendary Games’ 2-column full-color standard for the Mythic Monster-series and the 2 full page full color original pieces of artwork by Mike Lowe fit awesomely with the aesthetics of other fey-themed Legendary Games-supplements. The pdf has a bookmarked ToC, but not the usual bookmarked navigation help almost all pdfs come with these days, which constitutes quite a comfort detriment in my book. That being said, Mr. Legendary Games Jason Nelson will be fixing these as soon as LG’s busy schedule permits and since I do not doubt his integrity in the least, I will let that one rest.

Jason Nelson, Alistair Rigg, Tom Phillips and Benjamin Bruck have delivered quite a fine array of fairy tale creatures straight from the myths – and with quite a less pronounced focus on fey than I would have imagined, I might add. And these creatures feature some of my favorite beings in the genre – which is both a blessing and a curse in this installment. Having researched a lot of these critters, I am hard to surprise regarding the respective tricks they sport and have conversely an exceedingly high expectation – also due to the years upon years of Ravenloft-DMing and gobbling up just about all fey-related books I could get my hands on. That being said – it’s HARD to impress me in that regard anymore and I expected this to fall short. It did not. And that should be considered quite an achievement. Some of the beings herein did actually come over with the superb array of options I expected and wanted to see and the weirdness of the new critter falls square into this area – unique, cool, two thumbs up.

On the other hand, while the vast majority of creatures herein adhere to this superb level, here and there one or two creatures fall a bit behind their brethren – they are “only” good, not superb. Combined with the lack of bookmarks, this makes me settle on a final verdict of 5 stars….

EDIT: …And with bookmarks coming up AND one glorious beast of a bonus creature, this is now well worth a final verdict of 5 stars PLUS seal of approval!

You can get these cool creatures here on OBS and here on d20pfsrd.com’s shop!