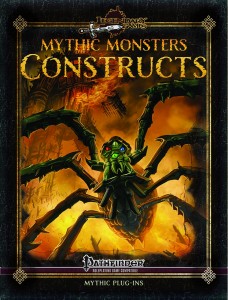 As with all mythic monster-installments, we kick off this pdf with new supplemental material, this time in the guise of a short summary of building mythic constructs, rules for the concise generation of mythic shield guardians (nice) and a bunch of mythic spells with a focus on constructs. A total of 6 such spells are provided and while the 6 ones provided are neat, in an odd formatting glitch, all but one adhere to a false formatting, which renders 5 of them looking like they were a subsection of the first spell. While not rendering the content less useful, this minor glitch makes handling the content slightly less comfortable than potentially possible.

But we’re here for the monsters, so what do we get? Well, first of all, it should be noted that thankfully, the constructs come with construction-information. The first construct provided would be the CR 4/MR 1 Caryatid column, which may utilize mythic power to either annihilate magic/attacks via attacks or spend mythic power to treat attacks as 20s…ouch! At CR 2/MR 1, iron cobras can spend mythic power to generate poison and become a nigh perfect tracker. In a rather cool array of options, adamantine, darkwood, mithral and similar materials can be applied as what amounts to CR-modifying minor templates to the construct, also reflecting this in the construction-information.

At the same low CR/MR, mythic homunculi can store spells and utilize them to supplement their offensive and defensive capabilities – which is nice, but the entry lacks the bolding for all special abilities.

Of course, no book on constructs would be complete without classic golems: CR 7/MR 3 Wood Golems receive bonus feats, SR versus fire (plus mythic power defense against it) and the option to spend mythic power to use splintering more often. Generally, a cool take on the concept! At one CR and MR less, Ice Golems also sports mythic power tricks to emit clouds of blinding ice and becomes fireproof. Also a nice one, though I think the wooden golem is slightly more interesting.

The CR 13/MR 5 Clay Golem requires mythic magic to be stopped/slowed and becomes an awakened, deadly adversary – which also constitutes the mayor benefits of this creature – it’s smart and deadly and the capacity to trap weapons in its body is a nice enhancement. That being said – no construction-information for these guys.

The CR 13/MR 5 stone golem utilizes two feats introduced in Mythic Minis/Mythic Monsters: Giants, provided in here for your convenience. They also are awakened and also come with upgraded mythic spells as a requirement to affect them. Weapons may shatter upon contact with these golems and a micro set of statblocks provides a variant with the giant template applied for CR 14/MR 5, but no construction-information. The same holds true for the CR 16/MR 6 Iron Golem – i.e. the iron golems also receive a giant variant and also have no construction information. The Iron Golem’s general tricks are nasty, though – ignoring hardness, using mythic power to double its DR temporarily, better powers/spells required to affect it and AOE attacks – nasty and deadly and rather iconic. Two thumbs up for these fellows.

At CR 13/MR 5, retrievers take a different approach- they may combine eye rays (including favorites like petrification, energy damage, etc.) with melee attacks and trace fleeing teleports – cool ideas for this iconic construct. Now if you’re like me, you’ll still shudder when thinking about the original wickerman movie and grin when thinking about the goofy Nicholas Cage-remake. At CR 16/MR 6, the mythic wickerman is nothing to chuckle at – extremely lethal, these things are healed by fire and are never consumed by the blazing flames. Their cooldown base conflagrations are nasty and yes, the can use mythic power to negate copious amounts of Fire Resistance. Worse, creatures burned to death in its cage can be turned into fire elementals…glorious!

Speaking of which – the CR 23/MR 9 Clockwork Goliaths receive Big Daddy-style admantium drills, canons (yeah, siege-weapon-level!) and a cool orichalcum alloy that enhances their defensive capacities alongside their electrical dampeners. Have I mentioned the buzzsaw blade arm or the pneumatic hammer? This one is a glorious example of awesome monster design – two thumbs up!

The new creature of this installment is a unique being indeed – Phantasmagoria wagons (CR 10/MR 4) are sentient carriages steered by a grim, shadowy coachmen. They feed on fear and can highjack creatures to pull it. In a rather cool twist, bardic performances duplicating, haunting choirs are provided and the strange construct does sport a pocket dimension into which it can draw target creatures – better yet, beyond boss-level enemy, your PCs may actually want to seek this creature out, for the boundaries of worlds and planes are ephemeral to these beings – great for a change of pace/transition to another world has rarely been so cool. This glorious boss, probably inspired by the damn cool boss in Devil May Cry 3, is downright inspired and one superb example of what the inspired minds at Legendary Games can achieve.

Editing and formatting are good, though not on par with the series’ usual standard – I noticed a couple unnecessary formatting glitches. Layout adheres to legendary Games’ 2-column full-color standard and the pdf’s 2 original artworks are gorgeous. The pdf is fully bookmarked for your convenience.

Jason Nelson, Alistair Rigg and Jonathan H. Keith provide a nice installment of the mythic monster-series here, one that does have its stars and glorious takes – the clockwork goliath, the new creature, the enhanced iron cobras and wickermen…all of these simply are superb examples of monster design. That being said, this pdf also sports a few creatures, namely the golems, who felt less inspired to me – while each does have at least one unique trick, some way of further adding to the creature’s lore in thematically fitting abilities would have been nice. Quite a few of the constructs herein simply did feel less inspired than what I’m used to by Legendary Games. Make no mistake, this is well worth its price and aforementioned constructs are worth the price alone. With the slightly increased accumulation of glitches, though, I’ll have to settle on a final verdict of “only” good, for a verdict of 4 stars.

You can get this neat installment of teh Mythic Monsters-series here on OBS and here on d20pfsrd.com’s shop!
Endzeitgeist out.