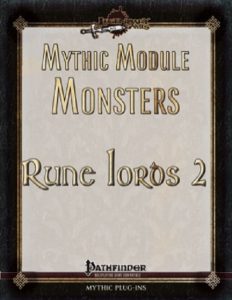 This inexpensive little pdf clocks in at 9 pages, 1 page front cover, 1 page editorial, 1 page SRD, leaving us with 6 pages of content, so let’s take a look!

What exactly is in here? Well, know how the AP-installment have a couple of monsters in the back? This book converts the beasts in the back of the by now legendary RotRL-installment “Skinsaw Murders”, the second Pathfinder installment, into mythic versions.

The pdf begins with the Lyrakien Azata at CR /MR 1,who may anchor herself to a fixed space and emit blasts of starlight that deal different damage-types for different alignments. At the same CR/MR-rating, mythic boggards have a caustic tongues that deal acid damage and may use mythic power to enhance their jumping ability. At one CR less, the carrionstorm’s mythic version may occupy the same space as allies and expend mythic power to shield allies, which is particularly cool for evil bosses conjuring forth these swarms of undead ravens.

The CR 8/MR 3 revenant utilizes Following Step and Step Up’s mythic version, with both mythic feats reproduced here for your convenience. The build here is pretty inspired – with ceaseless, cowering-inducing screams, nigh-impeccable pursuit abilities, the option to pain strike their murderers and a particularly lethal power versus their murderers, taking the concept up one notch.

The by now notorious lamia matriarch (at CR 10/MR 4) adds negative conditions to assaults on foes, depending on the number of melee attacks that hit home. Beyond that, flawless ventriloquism and fear-inducing illusions as well as a mythic upgraded version of their Wisdom drain render these deadly.

My favorite critter in the original module, though, were the faceless stalkers, who have been upgraded to CR 5/MR 2: Now, these lethal shapechangers may leech off blood…but more importantly, the creature gets a truly unique signature ability: Maddening Duplication allows the faceless stalker to replicate the face of a target, dealing Charisma damage and causing the disassociation spellblight to the target and even nasty effects on a success, emphasizing their twisted hunter-nature.

Jonathan Keith, Tom Phillips and Jason Nelson deliver a cool cadre of creatures here – though this time around, the divide between design-aesthetics is more pronounced in the first installment: The revenant and faceless stalker steal a bit of the thunder of the other critters herein, but that notwithstanding, we get an inexpensive, fun array of mythic creature upgrades here. My final verdict will clock in at 4.5 stars, rounded down to 4 for the purpose of this platform.

You can get these inexpensive mythic critters here on OBS!