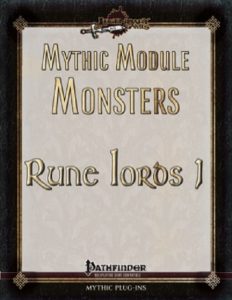 This inexpensive little pdf clocks in at 9 pages, 1 page front cover, 1 page editorial, 1 page SRD, leaving us with 6 pages of content, so let’s take a look!

What exactly is in here? Well, know how the AP-installment have a couple of monsters in the back? This book converts these beasts featured in the by now legendary first RotRL, the first Pathfinder installment ever, into mythic versions.

The first critter herein would be the CR 5/MR 2 Attic Whisperer – and one look at the critter makes clear that this is no hack job: White a morale-sapping aura of decrepitude, fast healing while within debris-laden areas and claws that can inflict hampering loneliness, the critter is an excellent example of really making a creature’s concept shine to the level the cool creature concept deserves.

At CR 2/MR 1, mythic goblin dogs not only receive the ability to cause nastier allergies, their very mere presence can also inspire nearby goblins, in particular their riders. At the same CR/MR-combo, goblin snakes are upgraded to have the ability to insert some flammable gas into their belches. I like the simplicity of this critter, walking just the right design-balance between animal and weirdo monstrosity. The CR 1/MR1 giant gecko featured herein takes the animal-design I love and applies it – removable tail, water walking and climbing make a lot of sense!

At CR 3/MR 1, sinspawn are among the more complex (and lore-wise, important) creatures – and they make full use of the great thematic expansions one can associate with the themes – from Ultimate Magic to Occult Adventures, the better spells are now integrated…oh, and mythic sinspawn can actually change their sin-type via mythic power. Absolutely inspired.

The Sandpoint Devil, with filed off serial numbers, has also been included here, at CR 10/MR 4 – and it makes sense: The bay can cause widespread panic; it can AoO uses of mythic power and actually can gain temporary mythic power! The hellfire breath is upgraded and the deadly trample it has similarly is cooler. Oh, and if you’re like me and were disappointed how easily it could have been slain…well, that stops now. This deadly creature is now truly an undying legend and while I would have loved some of the legends from the lore see a mechanical representation, that would have probably blown the being up to the highest of CR-regions.

Mike Welham, Jason Nelson and Steven T. Helt are all veterans – this little pdf is a great reminder why – there is not a single filler-creature herein, not one being I’d not immediately use over the non-mythic version. And that is awesome. My final verdict will hence clock in at 5 stars + seal of approval.

You can get this great little collection fo critters here on OBS!
Endzeitgeist out.