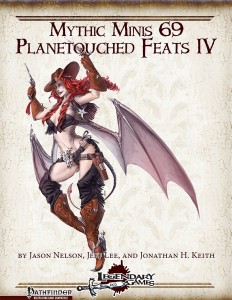 -Armor of the Pit: +2 natural armor; expend a use of mythic power for DR 5/good for tier rounds, scaling up to DR 10/good at 10th tier.

-Expanded Fiendish Resistance: Pick a type of resistance you don’t have from the elements; you gain resistance 10. Alternatively, increase an existing resistance. Can obviously be taken multiple times. Spend mythic power to transform a resistance into an immunity for tier rounds. The latter power-based trick could have used a bit of future-proofing: Now at this point there is sonic, negative energy etc., with some races and options sporting resistances towards them. Limiting the mythic power expenditure to the energies provided by the feat imho would have made sense.

-Fiend Sight: Ignore cover and concealment granted by fog and see right through it.

-Grasping Tail: As a swift action, expend mythic power to use your tail to pick up, put down, stow, unstow or place a small object within 5 ft as though you were using your hands, though you may no manipulate the item. For mythic power, you can also throw such an object within 30 ft. Solid and fun!

-Improved Dark Sight: You do not get light blindness.

-Incremental Elemental Assault: Sheathe each arm in a different energy. If you choose the same energy for both arms, add +1/2 mythic tier to damage. If you spend one use of mythic power, targets damage suffer an element-based additional effect with Fort or Ref to negate – cool imagery, cool mechanics -two thumbs up!

-Shadow Ghost: + mythic tier to CL for racial SPs, including access; Also power racial SPs via mythic power or render SPs their mythic variants instead via mythic power. This one is pretty strong or pretty weak, depending on whether you allow for powerful variants that sport good racial SPs. Definitely a feat I’d be careful around as a GM, though by no means broken.

Editing and formatting are good, though not perfect. Layout adheres to Legendary Games’ 2-column full color standard and the pdf has no bookmarks, but needs none at this length.

Jason Nelson, Jeff Lee and Jonathan H. Keith deliver some interesting planar feats herein, with especially Incremental Elemental Assault being awesome. Now the bland penalty-negation-feats and minor glitches do not live up to this awesomeness and over all, the pdf felt a tad bit less inspired than most mythic minis. Hence, I will rate this 3.5 stars, rounded up to 4 -not a bad pdf, but not a must-have either…unless Incremental Elemental Assault is as awesome to you as it’s to me!