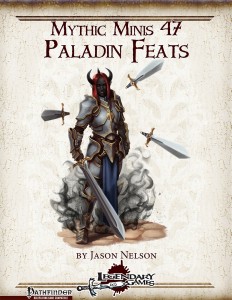 -Channeled Shield: Sacred/profane bonus for you, bonus to ref-saves for shield-using adjacent allies. Also grant total cover as per tower shield and extend this ability to adjacent allies. Elegant and damn cool – two thumbs up!

-Fearless Aura: Grant aura of courage in lieu of mercies when laying on hands, increased radius and immunity versus non-mythic fear/emotion effects for you and allies.

-Greater Mercy: When a target has no conditions to negate, add more healing and even provide temporary excess hit points. Also spend mythic power to use a mercy you don’t have. Very powerful.

-Painful Anchor: Increase DC of anchoring aura; also increased damage for violation of the aura; for mythic power, add a sickening as an insult to the injury. Damn cool!

-Radiant Charge: + mythic tier to damage dealt by a charge attack; also allows you to expend any number of lay on hands. If you hit touch AC, but not regular AC, you still deal the bonus damage. Alas, unlike the base feat, the mythic feat mentions the bogus “holy” damage-type that does not exist.

-Reward of Grace: Bonus to atk and damage when using lay on hands; good creatures also receives a minor bonus.

-Reward of Life: Heal whenever you heal another creature with lay on hands; Also apply the effects of a mercy on yourself or heal 1 point ability damage taken.

-Sin Seer: Receive detect evil/undead simultaneously when using either. Also, gain the mythic versions of the spells…however, does this mean that the feat allows you to choose either both non-mythic spell or one mythic spell? Or both mythic spells at once? From the wording, this remains, alas, ambiguous!

-Ultimate Mercy: Lesser lay on hands required to revive creatures from the dead and use mythic power to duplicate resurrection.

-Ultimate Resolve: Auras remain when you are unconscious etc. and even persist after your death for some rounds. With a nice antipaladin alternate prereq-version.

-Unsanctioned Detection: Use base feat mythic tier/day; Also use mythic power to change detect evil into another detect-spell, including a version of detect undead that can detect certain outsiders. Okay, I guess.

The SRD-page contains an additional feat, so be sure to check it!

-Unsanctioned Knowledge: +1 spell added to the list of spells known per mythic tier, max spell level equal to 1/2 mythic tier. Also allows you to unlearn spells and replace them with new ones. Problem: Does the gaining of tiers retroactively allow for more new spells gained or not?

Jason Nelson’s paladin feats are generally pretty cool – e.g. the shield-based tricks and those that focus on allies/buff-dispersion are downright fun. That being said, at the same time, the pdf’s feats partially feel less inspired than in comparative mythic minis and there are some minor glitches to be found with some feats. That being said, this is still a solid pdf. my final verdict will hence clock in at 3.5 stars, rounded up to 4 by a margin.

Ypu can get this mythic mini here on OBS and here on d20pfsrd.com’s shop.
Endzeitgeist out.