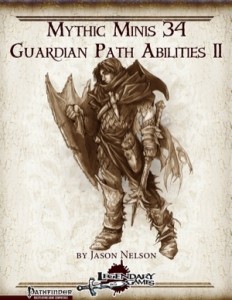 We get 3 1st tier abilities:

-Eyes on the Skies: Immediate awareness of any flying creature within mythic tier x 100 ft as long as you have line of effect. Expend mythic power to locate creature such foes, with no need to specify the creature type. Exact positions can be pinpointed within 20 ft + 10 ft. x mythic tier as per blindsense and gain uncanny dodge versus flying creatures whose location you know. Pretty awesome and mythic!

-Instantaneous Armamentarium: Pick up shields or weapons as a free or immediate action and take off/put on armors as a move action. Also, use mythic power to summon them to your hand, with reach governed by mythic tier. More mythic power can be expended to negate this max distance. Pretty cool, but I think the weapon/armor-summon-component needs clarification on what armor/weapon can be called – otherwise it can be used offensively. I assume a 24-hour wearing period was intended, but not implemented.

-Battlemagic Sense: Better spell-identification; use mythic power to temporarily treat your Spellcraft RANKS as your BAB; also: better chance of forcing concentration-botches and counterspell successfully identified spells as an immediate action, even if you don’t have line of sight. No, that’s not all this one does. Nice one!

-Blade of Reason: When identifying creatures, treat your weapons as bane property for 1/2 mythic tier rounds. For mythic power, apply bane to all creatures of the same type/subtype.

-Reflexive Retaliation: Whenever you take 10 points or more damage in melee by a single attack by a foe in reach, you may execute a retaliation at 1d6 points – automatically. Add mythic power for more damage. Automatic hit, but limited and at a low damage-output. Interesting!

-Skyshield: When wearing a shield, you gain cover versus attacks from above – and as a neat bonus, this includes all eventualities, including siege weapons. It gets better – while this one is ex, using mythic power turns it SU and allows you to generate walls of force versus attacks from above. And yes, the wording is concise, the wall modular. Glorious!

Jason Nelson’s new Guardian Path abilities are much, much cooler than the first installment – while not all are glorious, some are downright awesome – especially eyes on the sky and skyshield are downright beautiful. Hence, my final verdict will clock in at a final verdict of 4 stars, with a definite recommendation for everyone even remotely intrigued by aforementioned abilities.