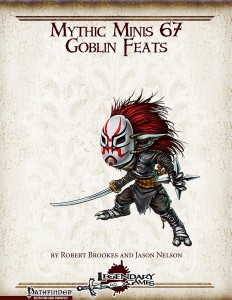 -Demoralizing Lash: It you hit a creature that is shaken, increase condition severity to frightened, with shaken following. Also increases the demoralize effect on adversaries witnessing your assault. Nice combo-potential.

-Fire Hand: Makes non-mythic foes always have to check versus catching fire; also allows you to use surge die to increase the DC. Cool!

-Fire Tamer: Increase save bonus to +4 and apply it to all fire effects; Also, at-will spark and mythic-power-based quench. CL = tier.

-Flame Heart: Fire resistance increases to 10; use mythic power for 5 times tier fire resistance without needing to expend an action. Also: “When casting fire spells with the fire descriptor or throwing alchemist bombs that deal fire damage, treat your caster level or alchemist level as though it was.” I think something is missing here – I have no idea what this sentence is supposed to mean.

-Focusing Blow: Help allies shake off mind-control; non-hobgoblins need to take at least 10 points of damage and get +1 to the save per 10 points inflicted. Use mythic power to crit your allies and render 1/2 the damage nonlethal, while still treating it as full damage for the purpose of this feat.

-Goblin Gunslinger: Bull rush or trip foes at range via medium-sized firearms, using Dex instead of Str for CMB. On a critical hit, this behaves as Awesome Blow. The maneuver is penalized by -5, with non-mythic targets sporting less pronounced penalties. On the nitpicky side, awesome blow may behave like a maneuver, but it technically is not one, though the pdf’s wording implies just that.

-Hobgoblin Discipline: +1/3 tier bonus to the effects of the base feat; double that versus fear-based effects; expend a mythic power to share the benefits with all hobgoblins within 30 ft. increasing the bonus if there are enough hobgoblins around. Okay one.

-Tangle Feet: Uses of +1/2 mythic tier versus larger creatures per round; when only using it against one target, increase the Acrobatics DC by tier, by 1/2 tier when affecting multiple creatures. Interesting one!

-Taskmaster: Use it as swift or move action, with cap being creatures not exceeding your HD and tier. If used as a standard action, +2 atk, damage and Will saves vs. mind-influencing effects. Use mythic power to negate the AC-penalty and skill-penalty or retain the penalty and extend the effects to tier round.

There also is a feat on the SRD-page:

-Terrorizing Display: Use Dazzling Display as a standard action; as a move at -5; as a swift action at -10. Allies within 30 ft get +2 atk, damage and Will saves vs. mind-influencing effects; allies between 30 and 60 ft away get +1; affected allies get -2 to AC and skill checks; Use mythic power to negate the penalty or extend the duration.

Editing and formatting are good, though there are some glitches here. Layout adheres to Legendary Games’ 2-column full color standard and the pdf has no bookmarks, but needs none at this length.

Jason Nelson and Robert Brookes deliver an interesting array of (Hob-)Goblin-themed feats herein and more often than not, the rules-decisions made feel concise and sensible, providing more than just a boring mechanical escalation. That being said, though I do enjoy this pdf, it also has minor wording hiccups and some of the feats herein feel like they are a tad bit less awesome than others. In the end, I will settle on a final verdict of 4 stars.

You can get these gobbo-feats here on OBS!
Endzeitgeist out.