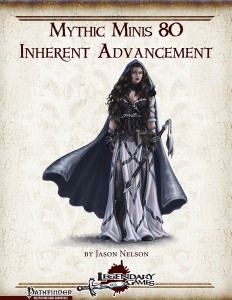 So, what is this about? Well, as anyone who has played the game, particularly in a low/rare-magic game knows, the engine’s numbers are predicated on a certain array of items: Rings of protection and cloaks of resistance in particular alongside ability-enhancing items. What this pdf proposes is an interesting alternative, namely the awarding of mythic tiers instead of treasure, while also championing a concentration of treasure in key items – a practice I’m btw. preaching and using myself in my games, with scaling magical items being common in my games – so yes, this makes magic items feel less super-market-like…which is a damn good thing in my book.

But the system presented is pretty elegant beyond that: Basically, every time a character gains a level, he may choose one of the following benefits, with the abilities having caps, but stacking.

Inherent Bonuses and Magical Arms and Armor: Weapons are ONLY magical in the hands of a character that has taken the ability for either magical arms or armor and shield; To use a weapon +2 at its proper potency, a character would need to take the ability for weapons twice, for example.

Items like rings of protection do not exist in their usual form, instead being command-word items that duplicate spells, with several suggestions provided.

Finally, there are ability-enhancements, better casting, resistances, skills, toughness, feats, AC and the like -a relatively diverse selection of benefits

Jason nelson’s inherent advancement mythic mini ends the series with a massive bang; I absolutely love this little pdf; my only gripe with it being that I’d REALLY love a full book that codifies the magic items this eliminates in more detailed manner – a massive inherent advancement book, with class-specific inherent advancement paths and unique benefits. This has HUGE potential and on the one page allotted, the basics are covered for a system that almost begs to be expanded upon. Capturing me like few books in the series have, this gets full 5 stars + seal of approval…and my ardent hope that the rules will be significantly expanded upon in the future – so we may put boring items and Christmas-tree-characters studded with lame magic items to rest for once and for all.

You can get this awesome mythic mini here on OBS!

Want ALL the mythic minis in one super-discounted bundle? You can get that here on OBS!
Endzeitgeist out.