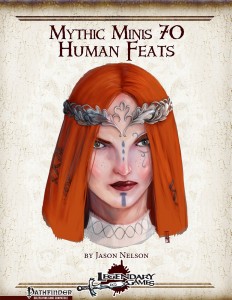 -Bestow Luck: + 1 extra daily use of Defiant Luck or Inexplicable Luck, but you must share that with an ally. You may grant additional uses of Inexplicable Luck to allies via the expenditure of mythic power and an immediate action.

-Critical Versatility: Gain or replace a critical feat by spending 1 minute practicing; for one use of mythic power, you may gain it as a full-round action or spend one hour practicing to gain the critical feat and its mythic version. You can do this as often as you’d want, but the new one replaces the old one. You still can only apply one critical feat per critical hit unless you have Critical Mastery. At 5th tier, you can learn a second feat for one use of mythic power, potentially serving as a prereq for another feat you temporarily gain via this feat, but not for any other purposes. This increases to 3 feats at 10th tier at + 2 uses of mythic power. I adore this scaling mechanism – nice one!

-Dauntless Destiny: Save bonus versus emotion-effects +1; Use mythic power to add mythic surge to the reroll. If you succeed, add the result of the surge to your demoralize check versus the attacker or the target of your attack. +1 use per day for every mythic power expended. Interesting!

-Defiant Luck: Force rerolls of ability, skill, caster level or combat maneuver checks against you. Can be used more often via mythic power.

-Fearless Curiosity: Save bonus versus emotion-effects +1; when rolling to reduce a fear-effect, roll twice and take the better result if the effect is non-mythic. Even if the effect had no save, you may roll to decrease its severity. Additionally, active use fear-effects provoke AoOs from you, but not constant or passive effects like auras.

-Heroic Will: Use the feat as a move or swift action. If you use it as a standard action, add surge die to your second save. Can be used more often via mythic power.

-Huntsmaster: +2 levels for the purpose of animal companions, mount and increase Handle Animal/Knowledge (nature) bonus to said types to +4. Always take 10 on Survival and Constitution checks while being adjacent to your furry (or scaly, or feathered…) friend and use mythic power to take 20. Also share favored terrain, quarry, swift tracker or woodland stride with the creature for mythic tier hours via the expenditure of mythic power. Nice, though the special-line is not bolded properly.

-Improvisation: +1 bonus in skills you have no ranks in; 1/day per 2 tiers, you can add mythic surge to such a check sans expending mythic power. 1/day, expend 1 use of mythic power to gain a mythic feat for which you qualify for mythic tier rounds. This cannot act as prereq etc.

-Improved Improvisation: +1 bonus in skills you have no ranks in, stacking with Mythic Improvisation; 1/day per 2 tiers, you can add mythic surge to such a check sans expending mythic power. You may also add this bonus to improvised or broken weapons. 1/day, expend 1 use of mythic power to gain a mythic feat for which you qualify for mythic tier rounds. This cannot act as prereq etc. – nice catch!

-Inexplicable Luck: Bonus increases to +10 before the roll, +5 after the roll. Use it more often per day via mythic power. If affected by a curse or other bad-luck-themed spell or ability, you can expend a use of the feat to negate the effect. Also negate the dispelling of a luck bonus on you via mythic power.

-Intimidating Confidence: Free action demoralize vs. non-mythic foes whenever you threaten a critical hit, even when not confirming. If you confirm the crit, replace shaken with the effects of crushing despair for the same duration as an EX, mind-affecting emotion effect. Spend a mythic surge as part of crit-confirmation to also apply its bonus to the demoralize attempt. Nice one!

-Martial Versatility: You can use the chosen feat with any weapon in any weapon group for which you have weapon training. Has a gunslinger caveat that has the “special” line not properly bolded.

-Martial Mastery: Use all combat feats that apply to a specific weapon group with any weapon in any weapon group for which you have weapon training. Has a caveat that does it for gunslingers. The special-line isn’t bolded properly.

-Surge of Success: Use the feat whenever you roll a natural 20 on any die roll, excluding taking 20 or abilities that auto-grant 20s or on meaningless die rolls. The circumstance bonus granted by 20 attack or save applies to atk, saving throws or ability and skill-checks. Nice one.

Editing and formatting are good, though I noticed cosmetic glitches. Layout adheres to Legendary Games’ 2-column full color standard and the pdf has no bookmarks, but needs none at this length.

Jason Nelson’s human feats do not have an easy legacy -a) the base feats aren’t that interesting and b) their mechanics lend themselves to nasty potential for abuse when taken up to the mythic level. I am glad to say that this pdf did not fall into such a trap, instead actually managing to render some of the subpar options of the base-feats actually worthwhile. The pdf also manages to get some notorious components like wildcard-feats right and done in a dynamic, yet not overpowered manner. Add to that the increased amount of content and we have a nice installment indeed – worth 5 stars + seal of approval.

You can get this neat mythic mini here on OBS and here on d20pfsrd.com’s shop!
Endzeitgeist out.