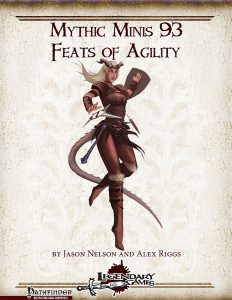 -Acrobatic Spellcaster: Replace concentration with Acrobatics when casting defensively. Also allows you to expend mythic power as part of spellcasting to also move. The move, even for mythic power expenditure, is very powerful and takes away one of the few balancing checks spellcasters still have. Also: There is a reason spellcasters don’t use a concentration skill in Pathfinder anymore. I can easily cheese Acrobatics very high. This one is not getting into my games, not even into the mythic ones.

-Careful Flyer: When flying at 1/2 speed, you gain a massive bonus vs. being checked or blown away and suffer less penalty due to high wind speeds. Expend mythic power to enhance skill check. Solid.

-Cat’s Fall: Take less damage from falls softened by Acrobatics and convert more falling damage into nonlethal damage. Use mythic tier for a bonus on the check. Solid.

-Deft Catcher: Use feat as a free action and when used as an immediate action, you can add tier to the check. You may use it even while panicked, stunned, etc. (cool!) and may expend mythic power to avoid falling prone on a failure. Like it!!

-Owl Dive: +1/2 tier to Acrobatics to move through enemy spaces. Use mythic power to temporarily get perfect maneuverability and if your charge ends at a lower place than it began, your charge will be more potent. Really cool one!

-Sliding Dash: Numerical escalation – less AC-penalty, higher Acrobatics bonus. Nice: If you fail the Acrobatics-check, you may forego the attack to not provoke an AoO. if your Acrobatics-check’s really good, the target loses an AoO. Love this one!

Jason Nelson and Alex Riggs deliver some nice feats here – while a couple only are numerical escalations and while I consider one to be OP; even for mythic gameplay, there are also some nice gems herein. In the end, this, to me, is pretty much a decent installment with some serious gems inside. Particularly Owl Style’s tree is pretty cool and so is Sliding Dash. Arkham series Batman, anyone? I digress. I will settle on a final verdict of 3.5 stars, rounded up to 4.