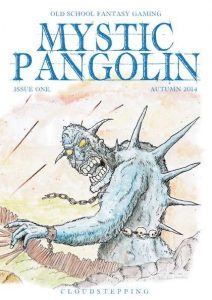 The first installment of this ‘zine clocks in at 54 pages, though front and back cover have been provided on one page for a wrap-around style. 1 page is devoted to editorial, 1 to the ToC, 1 page SRD, 1 page advertisement (annoyingly in the middle), 1 page adventure cover, leaving us with a pretty massive 48 pages of content, laid out for 6’’ by 9’’ (A5).

So, this is one OSR-‘zine that uses the Swords & Wizardry-rules as the default rule-set, and as always, conversion is pretty simple. It should be noted that this does offer quite a few system neutral articles that are useful, regardless of system used.

We begin this supplement with something I never expected to see: An article on the terminology pertaining casks and containers! And yep, this is rather well-researched and can be used by the enterprising GM to impart knowledge – did you know what a “Tun” or a “Hogshead” are? Or that “hogshead” was not unified, having different sizes for wine and ale? This may be a small thing, but once you’ve explained them, you can add a linguistic dimension to your descriptions that you previously can’t. A cool (and similarly well-researched) system-neutral article has collected a vast amount of hobo-signs in tables, allowing for graffiti in dungeons and cities – these are pretty awesome and handy to have, and signs like this can add greatly to the atmosphere of the game. It should also be noted that the author is probably an academic – sources are provided for further research, and the ‘zine even provides a citation-sample that you can just cut-copy and paste. And yes, citation is according to standards, which would give further credence to my thesis. Anyways, it may sound odd, but these two very “mundane” articles proved to be more inspiring than many more “magical” ones I’ve read, so huge kudos for adding such an angle.

Speaking of which: If you’re like me, you’ll also enjoy the next article, which probably has stemmed from the same frustration I regularly felt: Paper was expensive. As such, the overabundance of scrolls in many games tends to irk me somewhat. Well, the third article does introduce us to alternate means of writing down stuff, explaining clay tablets, wax tablets, clay cylinders, and scrolls are also expanded. Silk, papyrus, pothi and metal scrolls are covered, and lime bark codices and the like can be found. In case you want to randomly generate material, you can do so with a pretty complex generator – it looks a bit daunting at first glance, but is actually rather elegant, fitting the whole process on one page. A simple d50 table for general content may also be found.

Okay, the system neutral content so far has been a series of winners, so how do the materials with rules fare? The first article with the like would be about “Haeford” a coastal community with a solid b/w-map and 12 keyed locations supplemented by stats for key NPCs. 4 adventure hooks are provided, but no unlabeled map of the supplement is provided. This is, in style, somewhat akin to e.g. Raging Swan Press’ Village Backdrops-series, though it does not feature the same level of depth regarding dressing, local dressing habits and the like. Still, generally a solid coastal mining town, and the hooks are pretty nice.

The book also presents a module for characters level 2 – 4. As with most old-school modules, a well-rounded group is definitely suggested. The module only sports read-aloud text for the introductory angle. It should be noted that the map of the module within is formatted in A3, should you decide to print it out in A3. The dungeon sports 24 keyed locations and is pretty massive for being included in a ‘zine, though no unlabeled, player-friendly map is provided. Somewhat to my chagrin, no scale or grid is included on the map.

All right, you know how this goes – this is where I will start talking about the adventure in detail. As such, consider this to be the big SPOILER-Warning. Potential players should jump ahead to the conclusion.

All right, only GMs/Referees around? Great!So the name of the module “The Reliquary of Thazar Zul” evokes instantly hardcore Sword & Sorcery vibes, but starts in a somewhat problematic manner. An old lady spins an elaborate weave on how the PCs should retrieve the head of an evil man, one “Ector Kale”, who has ostensibly wronged the family – and now, they need his head to make him own up for the crimes. Since Kale has been dead for years, that RAW means according to S&W-rules that the old lady a cleric level 15+ on retainer. Öhem. Yeah. Logic-bug. Secondly, she is lying. Transparently. If the quest to get a skull of an evil man does not raise PC-suspicions, what will? The introductory rant, while well-written, will be highly suspicious for almost every group of players, and rudimentary fact-checking…can make the story partially unravel…or the like. This whole angle can be ignored – it’s ultimately just a pretext to get the PCs into the dungeon, which begins as natural caverns bisected by a stream.

The complex comes with 3 different random encounter tables for sections of the complex, and the complex provides 2 different unique fish that come with b/w-artworks – these are interesting and solid, and they are my favorite part of the complex. (A magic item with a cool b/w-artwork) allows for fish-charming, which is pretty neat. Yeah, alas, this doesn’t bode well, does it? The caverns are inhabited by gnolls and kobolds that are feuding. Ultimately, this’ll probably boil down to PCs killing them all. At one point, the natural caverns give way to a complex, where the eponymous reliquary may be found – which, may well be a phylactery or the like. Then, oh surprise, the evil mercenaries of the Cultus Tenebrae attack and try to take the reliquary on behalf of the old lady. Once the mercs are slain…the module ends. Yep. Unfortunately, this module is basically the bland prologue to an epic adventure – I’d have much rather read a module about handling/getting rid of the reliquary, and not deal with the super-obvious “evil cult tries to dupe the PCs/players”-angle. So yeah, if the name evoked Sword & Sorcery expectations…not much going on here.

Editing and formatting are surprisingly good for a ‘zine, much less for the first ‘zine in a series – the rules-language and formal integrity of the text is top-notch. Layout adheres to a printer-friendly one-column b/w-standard, and the b/w-artworks deserve special note – they are surprisingly neat. The cartography is also more than solid, but suffers from a lack of unlabeled player-friendly versions. A big downside of thus ‘zine would be the lack of bookmarks, which makes pdf-navigation less than comfortable.

Blackie Carbon’s Mystic pangolin #1 stands as an interesting supplement for a first ‘zine-installment. It is, formally, more professional than many established ‘zines. It also stands apart by virtue of its uncommon dressing-angle: Instead of the standard dressing tables you may expect, the installment provides quite a few great system-neutral articles that are well-researched and evocative. These actually educate, provide some obscure knowledge that even veterans may not have – and they represent a great starting point. With the hobo-signs, for example, it’d be super-easy to expand the list to include additional signs unique to your game/campaign. I loved these.

The village also is nice, but has to withstand the comparison to years of excellence in Raging Swan Press’ backdrops or Tim Shorts’ impressive ability to weave a tapestry of interconnected beings that form a small settlement; in contrast to these, the village feels like it does its job well, but doesn’t reach the level of excellence.

And then, there’d be the module. And there is no nice way to say it – it’s a painfully standard dungeon crawl with a problematic, really hard to sell entry-vector, one that ultimately rewards neither GM, nor players for experiencing it. It’s not bad, mind you, but it is not interesting in any way, ending when things would become interesting.

So, how to rate this, then? Ultimately, I’d usually settle on a final verdict of 3 stars, courtesy of the weak module; however, this *is* a freshman offering as far as I know, and thus gets a bit of leeway. Additionally, it is a pretty inexpensive ‘zine for the amount of content. Thus, as a whole, I will round up from my final verdict of 3.5 stars due to in dubio pro reo.