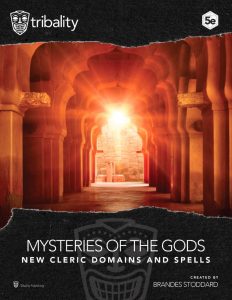 This expansion pdf for the cleric-class clocks in at 10 pages, 1 page front cover, 1 page SRD, leaving us with 8 pages of content, so let’s take a look!

After a brief introduction to the subject matter at hand, we start off with the Blood Domain…and at one glance, we can see that the spells in the domain’s list are not italicized, in a pretty obvious formatting hiccup. However, wait for a second – the spells themselves make sense, so how do the features fare? Well, at 1st level, you gain proficiency in all simple and martial weapons that deal slashing or piercing damage and when you fall below 1/2 maximum hit points, you receive temporary hit points equal to twice your cleric level, but only once per short-rest-interval. If your current hit points are below half of the maximum, you gain temporary hit points of the same amount when rolling initiative…which could be interpreted in two ways: One, it is an additional effect or two, this counts towards the limit. Option one makes more sense to me, but presentation-wise, this could be slightly more elegant. One more note: Since most ranged weapons are piercing, I’d suggest caution in case you’re using a lot of 3pp piercing weapons and firearms – in that case, I’d strongly suggest limiting the proficiency to slashing weapons, though that just as an aside that will not influence the final verdict.

Channel Divinity’s version for the domain also makes use of the 1/2 maximum hit points threshold – allies within 60 ft. may use their reaction to attack with a slashing or piercing weapon and if these attacks hit, they add your Wisdom modifier to damage. At 11th level and 17th level, such attacks also inflict +1d8 damage or +2d8 damage, respectively. At 6th level, any 1 or 2 you roll on healing effects or damaging effects/attacks is treated as a 3 instead, which is powerful and rewards risky play. 8th level adds +1d8 damage to piercing and slashing weapons, +2d8 at 1th level. You also get to add Wisdom modifier to cleric cantrip damage. At 17th level, things become hardcore – when you reduce a creature to 0 hp, you regain channel divinity or an expanded spell slot, with the spell slot equal to half the CR of the creature damaged or 5. Thankfully, I can put away my bag of fluffy kittens – the feature can only be used twice in a long-rest-interval. All in all an interesting domain that rewards risky playstyle – you basically are at your best when at below half hit points and the same holds true for your allies. In such, this feels like an heir of 4e’s bloodied mechanic, of which I never was a big fan. Still, from a neutral position, I can appreciate it.

The second domain herein would be the exorcism domain, which yields your choice of proficiency in Arcana, Insight or Intimidation at 1st level and also proficiency in Abyssal, infernal, Celestial, Sylvan or Primordial as well as heavy armor. Finally, you get the censure cantrip -bingo, not italicized. Channel Divinity allows you to turn fiends and fey and reveals their true form if they fail their Wisdom save. At 6th level, channel divinity can be used as a reaction to grant an ally within 30 ft. a reroll of a save resulting in possession or the charmed/frightened conditions – nice!! Even betetr – if said save is successful, you deal radiant damage to the creature that prompted the save – 2d8 + Cha-mod, which increases to 3d8 and 4d8 at 11th and 17th level, respectively. At 8th level, your weapon attack once per turn gains +1d8 radiant damage, +2d8 at 14th level, and you add Wisdom modifier to any cleric cantrip’s damage. The 17th level feature adds a temporary banishment effect to unearthly creatures (precise list includes undead, fey, elementals, etc.) when they roll a 1 on saves versus you – including the option to potentially drop concentration in favor of the banishment. VERY cool! I love this domain. It’s a specialist, sure, but it has some seriously cool mechanics!

The spirit domain nets proficiency with the herbalism kit and the spirit claw cantrip as well as proficiency in your choice of Animal Handling, Nature or Survival. You also get a totemic companion of either bear, eagle, snake or wolf – and the mechanics are amazing: You can direct this spirit as part of any other action to move and it is impervious to all but force damage and regenerates all damage after one round; however, 10 points of damage disperse it. Here’s the cool thing: When you do not cast a spell (excluding curing spells) or attack, said companion gets to attack! This basically allows the player to contribute in otherwise dead/healing rounds or when concentrating. Big, big kudos!

At 2nd level, channel divinity allows for some seriously cool tricks – depending on totem spirit chosen, the activation can range from reaction to action…and they include damage resistance for yourself or an ally versus one effect, spirit companion short-range teleport (which takes an ally along, in the eagle’s case or heals a target close to the destination of the snake totem!) or knock foes prone. Very, very cool – and at 6th level we get even more of these variable options. Absolutely amazing. 8th level allows the spirit companion to gain free attacks versus creatures you damage and 17th level nets resistance against cold, acid, cold, fire, lightning, poison and thunder damage, which may be a bit overkill, particularly since you may also, once per long-rest interval, grant yourself proficiency in a language, save, skill or tool. Know what this domain made me think: Ironically, it is a better, cooler representation of the shamanic concept than tribality’s shaman class. It’s amazing. It’s the coolest domain I have read so far for 5e.

The pdf also includes, surprise, 8 new spells for the cleric, with a handy sidebar guiding the GM regarding their use/whether they’re appropriate for other classes – kudos for going the extra mile there! Angelic Boon can be used as either a healing spell for allies or as a radiant damage inflicting melee spell attack. Clarion Call can rouse sleepers and end one condition like charmed, frightened or confused. Harrow deals minor psychic damage, but also adds a debuff to the creature’s next roll before the end of its turn. Righteous Accusation can be upgraded with a proper and costly scroll containing a target’s sins -and inflicts serious psychic damage and can cause the creature to be frightened. If the more costly version is used, the creature also receives two vulnerabilities…which is very powerful, yes…but also rewards proper legwork…and I’m pretty okay with it, in spite of the spell’s damage type being pretty potent. Song of Battle is a cantrip that deals psychic damage and also adds radiant damage to a nearby ally’s attack. Aforementioned Spirit Claw is basically a spell-command for the spirit companion to attack and thus does nothing without one. Spirit Wind, at 8th level inflicts selective radiant or necrotic damage to a type of creature or race and bolsters you or an ally with temporary hit points, healing or better damage, though only one benefit may be gained thus – so no, can’t be kitten’d and explicitly states that deities do not look kindly upon the spell’s misuse. Word of Censure, finally, would be another psychic damage-causing cantrip, but one with an interesting mechanic – if a creature affected moves closer to you, it’ll take the damage a second time.

Editing is top-notch, I noticed no significant hiccups. On the formatting side, the lack of italicization is a bit jarring. Layout adheres to Tribality Publishing’s crisp and very unique 2-column full-color standard and the pdf includes the thematically-fitting, kind of photography-like artworks we’ve come to expect by now. The pdf has no bookmarks, which represents a minor comfort detriment at this length.

All right, while I am not sold 100% on the cantrips and the pretty potent utility they exhibit herein and while I really dislike the bloodied-style mechanics of the Blood domain, this pdf is still amazing. The exorcism domain is extremely flavorful…but it is the spirit domain that makes me smile from ear to ear. The spirit companion mechanics is a stroke of genius and allows you to actually act and do something active, even while healing allies and doing less exciting cleric stuff. Add the tactical options via the channel divinity tricks and we have a full-blown winner that is worth the low asking price all on its own. The spells similarly provide some absolutely evocative visuals. To sum up – one domain is very much a matter of taste, one is very good, one is pure amazing and the spells also should be considered to be among the better examples of their craft. In short: Brandes Stoddard’s pdf is an amazing deal for any 5e-cleric (Seriously: Spirit domain. Never look back.) and deserves a final verdict of 4.5 stars, rounded up to 5. Excellent job!

You can get these cool domains here on OBS!