Miscellaneous Musings: EZG in the US Part I

Miscellaneous Musings: EZG in the US Part I

This was a long time coming…only, I didn’t know about it. As many of you will know, the trip to the US was pretty much a surprise for me, the most awesome surprise I had…well. Since my trip to Gencon. To say that 2016 was incredibly kind to me would be an understatement and I am incredibly grateful to all my friends, readers, supports…to you.

Anyways, I did not even know where I would go in the end…until I saw the plane. San Francisco. I gulped. I *know* it’s the most expensive city in the US…and we only could afford 2 days…but oh boy. Finally, San Francisco. I grew up with parents deeply entrenched in rock and roll, in classic rock music; I would have brought an appropriately-shriveled flower for my hair for the goth take on the town…

…but kidding aside. I am a big believer of knowing the origins of anything and thus, I have studied my chosen subcultures, namely metalheads and goths and where they came from…and ultimately, if you retrace your steps through history regarding counter-culture, you’ll find the Beat Generation. When I first read “Howl” and what it did for freedom of speech, I was blown away; when I first picked apart “Naked Lunch” and rearranged it accordingly, it reconceptualized what books could do, at least for me. When I read “On the Road” and “The Subterraneans” for the first time, I got rid of all lingering sentiments of racial clichés and finally realized the origin of my seemingly inborn longing, my Fernweh, my wanderlust. When I read Diane DiPrima’s “Lobo” for the first time, I sat down with mythology-references and started picking it apart, devouring its every sentence and their sensual aspects.

To say that I’m a big fan of the Beat Generation and the poetry created by them would be an understatement. These pieces of literature, to me are probably as close as die-hard atheist me will ever get to a spiritual experience. Walking these self-same streets…would be amazing. When we arrived and got out car, I knew we’d get a “middle-class” vehicle. That turned out to be a Nissan Altima. With cams and GPS and everything. Dear friends in the US: That type of car is upper class around here and as big as they get. Driving it through San Francisco, of all places, was an interesting experience indeed. 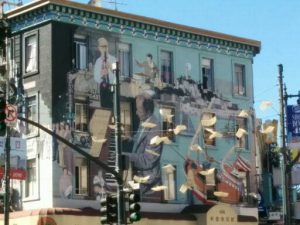 Speaking of which: I certainly had heard about San Fran featuring some hills. Well, the city’s steep-angled streets are actually something I loved: I enjoy walking a lot and the steep angles made getting around town a challenge in a neat way. There were two issues, though: One, I did not have a proper phone and no time to schedule meet-ups with my designer/reader-friends, which was a huge pity…and when I tried to schedule one short-term meet-up with Michael Azzolino, my girl-friend’s phone, the only one that worked properly…did the google-phone-equivalent of the spinning beach ball of death and permanently went kaput.

So yeah, that aspect was not the biggest fun I had. However, the precious, short time I had in this magnificent city was absolutely amazing: When I stepped inside of City Lights, I realized that this very place would be my home away from home, that I could literally spend days and hundreds of dollars buying the amazing poetry they offered…and while I got the rest of my travelling literature here, we could not spend much time there. Similarly, Vesuvio, legendary and right next door, proved to be an almost perfect spot to follow up the trip to City Lights: Awesome people and an air of globalized intelligentsia suffuses every brick here; indeed, I had an amazing time talking to folks from all over the globe…though, at the same time, the San Francisco natives I talked to confirmed my observations – that the Silicon Valley elite was driving out the parts of the population that fostered this air, tinting everything with a sepia-tone and a melancholic sax accompanied by a mellow piano…at least, that’s how I experienced the atmosphere, in spite of the legendary Carl sparing us during our trip. 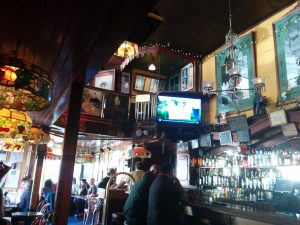 Under the blazing sunshine, we drove across Golden Gate (again, no time, alas, for a visit to Alcatraz, so that one remains on my bucket list) and visited Muir Woods, stood amid the titanic redwoods and their majesty, breathed in the clear air…and walked. One piece of advice: If you go there with city-slicker shoes like yours truly, walk the regular walk and hubris starts crawling in, don’t listen to it; don’t try to take the scenic route to the vista with non-hiking boots. The angle’s incredibly steep and I was basically wheezing on a never-ending track with the wrong shoes. The distances on the map are NOT, I repeat, are NOT to scale. The scenic vista-trip is HUGE, the basic trails on the bottom are tiny and we finished them in basically 10 minutes…so yeah. I’m an experienced hiker, but that steep incline with the wrong shoes? Bad idea. On the plus-side, we do not have such titanic, majestic trees around here – this was one mind-blowing experience.

Speaking of which: I have not seen anything of the nightlife due to budgeting and time-constraints, and I only had KoJa once, something I most certainly need to remedy: This would be, in case you don’t know, Korean-Japanese fusion cuisine and it’s just as amazing as you’d expect it to be. Suffice to say, against the backdrop of the vast cultural offerings of the city and not nearly enough time to scratch the surface, I only left San Francisco with a huge desire to return and stay for a longer time. This city, to me, felt as close to a spiritual home as I could get.

But the road moves onward evermore, the wheel in the sky keeps turning ever onward and we were already off to Pacific Grove, which was a must-have due to the aquarium, where the animals of the ocean are properly treated. The place, to make a long rant short, was definitely worth the significant entry fee: Particularly the cephalopods are amazing. I learned that they actually can “walk” on two tentacles and while I was aware of their personalities and HUGE intellect (they can make TOOLS like monkeys or ravens!), seeing them was amazing. In fact, I got a cute and amazing, huge, evil-looking red octopus plushy, lovingly named “Egon.” Beyond that, light houses and the coastal line were amazing and I actually managed to meet up with Taylor Hubler, if only for 15 minutes – we had taken the famous 17-mile-drive and it took forever to complete. And if you want my opinion, it’s a nice ride, but not worth the time or payment, at least if you’re not into golf. 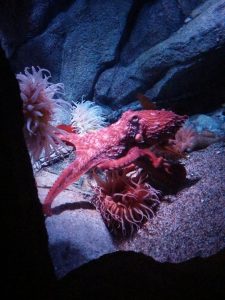 However, there is another route I definitely consider to be a life-changing event. Big Sur. Having read Kerouac’s novel of the same title, I always wanted to see the place that was at once sinister and gorgeous, magnificent and malevolent, that was the breakdown-and-recovery-made-nature. Big Sur is, frankly, the most beautiful road I have ever travelled. To your right, the pacific ocean cascades against the cliffs, roaring, majestic, raw; clean breezes scour the waves and vortices draw their evanescent paintings on the waves. Trains of fluffy, thin clouds dance on the horizon, only to be dissipated by the cleanest air. As the golden-red sun draws it gilding rays across the sea and the steep mountains, as it slowly sinks beneath the waves to arise again over the mountains to one’s left, there is a profound sense of awe, of jamais-vu overcoming me.

Americans generally think highly of the beauty of their country, though they are hesitant to admit it; here, I really saw America the Beautiful. Here, I realized what so many poets and authors talked about. Since San Francisco was, even in the brevity of our stay, beyond our budget and since I couldn’t stop looking at the magnificence here, we decided to just stop and sleep in our car. It was warm enough, but night turned freezing cold…which I loved. The oscillation between hot and cold was an amazing thing to experience and in the clean sea-breeze, I slept the best sleep of the last 5 years, easily – free of any allergies. 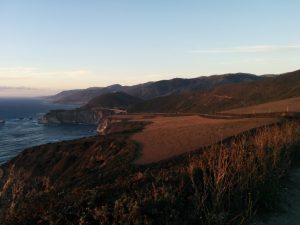 But I’m skipping ahead – so far from any light pollution, my experience actually intensified when the sun set: I saw the milky way for the first time since I left Norway behind. I am incapable of crying for emotional reasons, but if I could have…well, tears of joy would have run down my face. I sat there, smoking and staring at the night skies, lying on the soil of the country I had heard so much about, stared at the skies and felt, for the first time in a long, long time…content. In an existential, primal manner. Like I was experiencing a moment in time that could  stretch on forever; that if I died right then and there, I’d be happy. This was, in the truest meaning of the word, a moment, nay, a stretch of time that was sublime; a beauty that transcends anything you’d usually associate with the mortal world.

I have never got up from any bed to such beauty, such splendor, such meaning suffusing everything – and eating bacon, pancakes and drinking coffee while watching squirrels just put the maple syrup on the glorious experience here…and, again, I just wanted to stay like this forever…but the South of California was beckoning, the juggernaut L.A. looming beyond Santa Barbara, which would be our next stop…

See you next time and thank you for my self-indulgent ramblings! Next week I’ll have more for you! have a great week-end!!