Mini-Dungeon: Temple of the Secret Power

Mini-Dungeon: Temple of the Secret Power 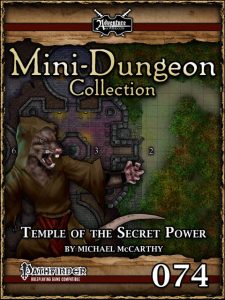 There are forces out there that few truly understand – one such item would be the omnihedron, an artifact with a snide intelligence that is capable of temporarily imbuing items with magic, which is used to some effect to upgrade the ratfolk cultists that worship at this place. This can be somewhat of a killjoy for the PCs when the magic items their opposition wields loses the bonuses. The artifact doesn’t get stats per se once liberated, and may or may not enhance the weapons of the PCs. There is a puzzle, but it amounts to being very rudimentary.

Michael McCarthy’s “Temple of the Secret Power” is a bit weaker than usual for the author. The mini-dungeon’s artifact-conceit is a bit frustrating for players and the lack of definition for the artifact’s precise powers render this more opaque than it imho should be. As such, I can’t go higher than 3.5 stars, rounded down for the purpose of this platform.