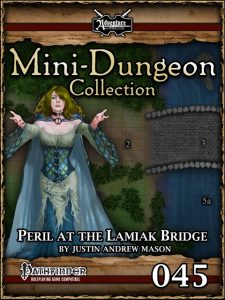 Lamiak (singular lamia – somewhat unfortunately named, considering we already have lamia in PFRPG) would be nymphs with the webbed feet of a duck, while mairuak would be friendly giants – both btw. taken from Basque mythology, so the name-convention conflict gets a pass.

Anyway, this is basically a nice and interesting, pretty fairy-tale like encounter: You see, the lamia have built a bridge cross a stream, with the map depicting the vicinity. The stone the bridge was taken from, however, is uncommon and was stolen from a mairu (aptly named Peril), who jealously guard this type of stone. He and his brothers Wrath and Sorrow are about to demolish the bridge, while the two lamiaks are about to unleash their fey tricks. It’ll take some negotiation by the PCs to defuse the situation sans it coming to a violent resolution… That being said, the encounter can be resolved by adept PCs pretty smoothly, which may render this encounter a rather brief affair.

Justin Andrew Mason’s encounter here is fun; the tapping into a none-too-often employed mythology is appreciated and a GM that can capitalize on the wonder and fairy-tale-ish nature of this set-up can certainly make this work as a fine and memorable roadside encounter. At the same time, the encounter doesn’t have that much meat on its bones. RAW, a single check can resolve it, which feels somewhat anticlimactic. This *is* good and, in the right hands, can shine…but similarly, it can fizzle pretty badly. A more complex negotiation situation would have helped making this more captivating.

Hence, my final verdict will clock in at 3.5 stars, rounded up, but only barely due to in dubio pro reo.