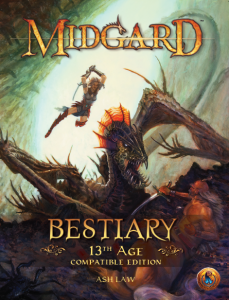 The 13th Age version of the Midgard Bestiary clocks in at 110 pages, 1 page front cover, 1 page inside of front cover, 2 pages of editorial, 1 page SRD, 1 page back cover, leaving us with 104 pages of content, so let’s take a look!

Well, we begin this book with a brief introduction on how it came to be and a handy ToC-style list of the creatures featured herein before we dive straight into a significant array of creatures that Midgard-aficionados will recognize quite a few of the adversaries featured within these pages – beyond a simple enumeration of creatures from the Midgard Bestiary, we actually receive more than a few pieces of content exclusive for this iteration of the book – which conversely also allows for quite a bunch of the classic modules in Kobold Press’ catalog to be easily converted to 13th Age.

However, the inspiring component of this book cannot be exclusively be found in the monsters themselves – as you know, statblocks of 13th Age adversaries do not tend to be marvels of complexity. It is in the details that things get proper and interesting -at least for me. You see, the creatures featured herein take more than a passing cue from 13th Age’s innovations. Beyond multiple creatures for humanoid races, with often varying abilities, the book also sports a rather impressive array of supplemental material – from nastier specials to, yes, magic items. This, for example, renders the notoriously cool in concept, but bland in execution Alseids (centaurs with deer-like lower bodies) interesting – and the girdle’s quirk of only allowing for the consumption of rain water, can have some rather interesting side effects. From clockwork creatures to Arbonesse exiles, the author has gone above and beyond to properly represent some of the most unique components of Midgard with the proper care and diligence regarding the mechanical effects.

Deadly mosses and the iconic darakhul feature herein alongside lethal swarms and the iconic derro fetal servant is herein as well, though in this iteration, I consider it a bit weaker than its PFRPG-version. New devils, from the gilded servants of Mammon to the ink-stained agents of Titivillius and Niemheinian gnomes that may or may not serve them, provide ample fodder for stories envisioning hellish vistas. A selection of drakes (including the hilarious alehouse drake) can be found herein alongside the fabled ghost boar of the Ringwood and the riders of Marena and the vril-powered bows using goblins of the wasted west certainly are intriguing, though I do bemoan that these guys do not get a cool mutation table akin to the chaos beast and chimera’s versatile treatment in 13th Age’s superb Bestiary.

The eye-eating insectoid Horakh and the ship-smashing Isonade have found their ways inside the pages alongside diverse kobolds, from ghetto guards and their dire weasels to their owl-riding sergeants. Mharoti dragonkin and the eldritch masters of Allain complement Roachlings and Rothenian Centaurs and obviously, neither gearforged nor shadowfey should miss here – all in all, the selection sure is awesome, if a bit humanoid-centric for my tastes.

This is not where the bestiary ends, though: There are 9 new player-races here and they generally fall into one of two categories: Simple or complex. Centaurs, Gnolls, Minotaurs and Roachlings generally are rather solid and easy to grasp – with a racial power and some minor feat-chocies, they are solid, though the nitpicker in me still would have loved to see the pdf specifically mention that roachlings do not get additional magic item slots for their additional limbs.

The undead, ghoulish darakhul would be slightly more complicated, obviously having no Con-score. The lethal bite, which scales with level, could have been tied to the weapon scaling of classes, but that may be my thing. Similarly, the construct-like gearforged are pretty complex – but their complete lack of recoveries and reliance on being repaired makes them glass cannons. Worse, does their lack of ability to use recoveries to heal also extends to class abilities, talents and the like? It’s certainly a minor thing, but still. Goblins of the Wasted West, Kobolds and Ravenfolk are pretty cool, though. An okay section, though one I’m a bit wary of some races herein.

Where the pdf once again becomes awesome (and indeed non-optional for any 13th Age Midgard-campaign) is with the final section by Wade Rockett: Midgard Icons. Yes, we get a full-blown write-up of icons for Midgard and they universally surpass those featured in the Dragon Empire: From Baba Yaga to Regia Moonthorn Kalthania-Reln van Dornig and the Dragon Sultana; the emperor of ghouls; Cadua’s first duke, the master of demon mountain and the illuminated brotherhood: The icons presented here are absolutely GLORIOUS – not only do they draw perfectly on Midgard’s unique, awesome fluff, they actually are multi-faceted, brilliant creatures that go one step beyond the one-dimensional archetype of the regular icons. Where 13th Age’s default icons are currently slowly moving away from being cardboard cut-outs (see 13th Age Monthly: Echo and Gauntlet, for example), here we already have a cadre of full-developed, inspired icons, including True Dangers, allies, common knowledge and the like – this chapter is just brilliant.

Editing and formatting are top-notch, I noticed no significant glitches. Layout adheres to a beautiful, printer-friendly two-column full-color standard with plenty of neat full color artworks. On the nitpicky side, there is quite a bit of blank space on some pages, where obviously artworks or more content could fit. 😉 The pdf comes fully bookmarked for your convenience

Ash Law and Wade Rockett deliver an excellent array of converted creatures herein – and while I’m not 100% content with all of the racial options provided, that still leaves a significant amount of inspired adversaries AND the excellent Midgard-icons, rendering this book practically non-optional for Midgard games utilizing the 13th Age-rules. My final verdict will hence clock in at well-deserved 5 stars.

You can get this damn fine bestiary for 13th Age here on OBS and here on d20pfsrd.com’s shop!