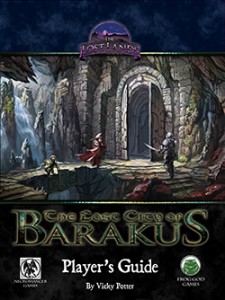 This book clocks in at 18 pages, 1 page front cover, 1 page editorial, 2 pages of advertisement and 1 page back cover, leaving us with 13 pages of content, so let’s take a look!

All right, so let’s get this right out of the way – this one will be brief – why? Because this is a player’s guide and it’s the school of book that is all about the fluff: We thus begin this player’s guide with the PCs entering the city of Endhome – a massive settlement and one of the key locations of the massive “Lost City of Barakus”-mega-adventure. As befitting of people arriving at such a place, the PCs hire a guide, Corlius, who then proceeds to show the PCs the sights and introduce them to the dynamics of Endhome, relevant places and the like: After an extensive and well-written tour through the massive city (including a nice, schematic map of the place), the PCs will find themselves in the King’s Road Inn, the place most likely to cater to the adventurer’s profession.

As such, here, the PCs will not only be introduced to some crucial NPCs, they also will hear quite an array of rumors that may result in them going forth, checking them out – within the frame narrative of these conversations, the PCs get to know about several of the dangerous and intriguing areas beyond the confines of Endhome’s walls – without spoiling the achievement of discovery when the PCs finally explore Barakus – kudos for going this route!

That’s not all, though: Players will certainly appreciate the run-down of the places that offer shopping opportunities, a list of notable key persons and even a page of common knowledge and obvious rumors.

Editing and formatting are very good, though one header has a formatting glitch with a relic <n> and a header that is regularly sized. Apart from that, no complaints. Layout adheres to Frog God Games’ two-column b/w-standard with nice b/w-artworks and hand-drawn, sketchy schematic maps that spoil nothing. The pdf comes fully bookmarked, though I’d advise in favor of getting this book in paper (the print-version being glossy with high-quality paper) – perhaps one for each player.

Why? Because Vicky Potter’s player’s guide is not only a good read: This is perhaps one of the most useful player’s guides I’ve read in a while. You see, I played Barakus back in its 3.X-iteration and while I loved this gigantic sandbox, it took a lot of time to set-up: You’ve probably experienced this yourself: Until the players and PCs have a grip on a wide open sandbox, you’ll be doing A LOT of exposition, when everyone at the table would rather be adventuring. This is where this player’s guide comes in: Simply hand it to your players, have them read it and there you go – all exposition right out of the way, and in medias res, you can start the discussion of what they want to check out first. This book makes getting to the meat of the module so much easier – sans SPOILING any crucial details. Oh, and it’s also a compelling, fun read AND a good reference book for players forgetting the names of important NPC XYZ. This is pretty much a glorious Player’s Guide that does its job exceedingly well. My final verdict will clock in at 5 stars + seal of approval.

You can get this Player’s Guide here on Frog God Games’ homepage!