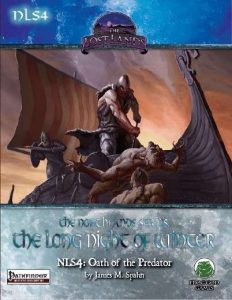 This module is intended for levels 6- 8 and is set in Frog God Games’ Lost Lands campaign setting. It can be run in another context/setting without any hassle and its raw content clocks in at 21 pages, if you take away the pdf’s editorial, cover, etc..

One generation has passed since the final journey of Thorvald the Wanderer, since the fateful day, when he, alongside his long-term companion Ivar, ventured into the deep woods to eliminate the otherworldly darkness that was terrorizing the area. He did not make it out of the woods, though his friend Ivar did – Ivar became the jarl of the village that he named for his friend’s sacrifice, Thorvald’s Gift. A generation has passed and Ivar’s son Bóthvarr has taken the mantle of the jarl – but the horrid darkness has returned. Blood-thirsty beasts are assaulting the settlement once again, the dread sceadugenga are back and have even dragged Ivar from his place – unless the PCs interfere, the hamlet is doomed.

Crafty PCs will smell that there is more afoot here and thus, we get a proper rumor table as well as a rather detailed summary for the hamlet, including NPCs, settlement statblock and copious amounts of read-aloud text – and if the PCs are really good, they may actually find a secret journal of Ivar (represented as a cool one-page handout!), in which he explains the truth: You see, he had been cursed, a lycanthrope seeking a cure – and when he went inside the wood, the dark influence at its heart, the Black oak, took hold of his senses and made him slay his companion. Wracked with guilt, he swore an oath to whatever deity would listen – and a trickster god did…but now, alas, the oath’s catch has been triggered and the Black Oak once again grows in power.

Thus, in order to stop the influx of deadly creatures, the PCs will have to embark into the wilds…provided they can repel the assault that is bound to happen at night. The journey into the forest, while not particularly detailed, features random encounters and manages to evoke a rather dire atmosphere, as terrain is more dense, flight not an option and a seemingly immortal beast, Ivar, is tailing them. Here, resource-conservation is already a crucial strategy, for within the dark woods, there lies the tainted, gigantic oak, from which a blood-red sap is flowing. Thorvald’s erstwhile companions (and himself) have been perverted in horrible ways and provide lethal foes for the PCs, as they wade into the red liquid to make their way from the roots into the heart of the gigantic tree – where a unique golem and the black heart of the place make for an evocative and dangerous puzzle boss fight in a truly glorious environment.

On their way back, there is only one thing left to do: Slay Ivar, who, full of sorrow, expects to find a warrior’s death at the hands of the PCs (and represents yet another way beyond the hostiles) to explain the plot if the PCs botched the investigation – ending the module on a somber note resonating with the morality and pragmatism, but also the heroism of the northlands.

James M. Spahn delivers big time here: While easily transported to other environments, this module breathes the spirit and atmosphere of the north. Direct and indirect storytelling weave a narrative of woe and loss, betrayal and redemption against the backdrop of a very challenging and incredibly evocative backdrop. The creatures encountered demand different strategies, reward smart PCs and the immortal hunter stalking the trail of the PCs can generate a sense of horror and allow the GM to challenge even the best of groups and adjust the difficulty of the module. This gets what makes the north tick and its visuals are glorious. It also never feels like it tries to do too much: The evocative environments are all depicted in lavish detail, never falling prey to trying to do too much within the page-count allotted, making this feel very well-rounded. In short, this is a glorious module, well worth 5 stars + seal of approval.

Do you prefer OSR-gaming? The S&W-version can be found here!