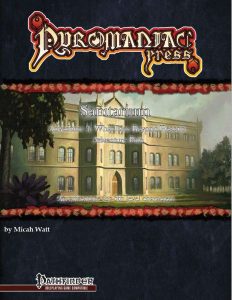 As before, we get a selection of pregens, 5 to be precise, should you choose to replace a fallen PC or dive right into this. However, I do recommend playing the series; while deliberately slow in the beginning, the third module remains one of the best haunted house modules I know, and if this one can retain that level of quality, then we’re in for a treat!

Now, on a formal level, it should be noted that, like the previous adventures, we get EXTENSIVE map-packs: We get versions of the maps in b/w AND full-color, with and without grid, and with and without background parchment – where relevant. Smaller, room-sized maps come in player-friendly versions in full-color, accounting for the fact that they’ll be used by klutzes like yours truly that can’t draw, or by folks using VTTs. Seriously, though: Big kudos, particularly considering that Pyromaniac Press is a small and relatively new outfit – this sort of support should be standard!

The module, while intended for 6th level characters, sports scaling advice for 5th and 7th level; medium advancement track is assumed. Particularly when running this as intended, as part of the AP, it becomes important for the GM to note dynamics; system-immanently, at this point NPC-allegiances and the state of the metropolis Anduria can begin to diverge rather greatly due to the sheer number of variables. As such, the series no longer assumes certain things to necessarily hold true, which is a good thing in my book – freedom is preferable to being shoehorned into one story.

As far as rules-relevant content is concerned, the pdf is generally really solid, though there are a few hiccups: There is no unholy damage in Pathfinder, and it’s “Resistance 10”, not “resist 10” regarding the formatting of resistance in text. Oddly, in spite of being, according to the 5e-version, written originally for PFRPG, there is also a reference to a Dexterity saving throw that should reference to Reflex saves instead. These are the exception to the rules, though – as a whole, the module is solid and easy to run, and even the rare few glitches should not stump any GM.

There is another note: The AP, while NOT grimdark or particularly bleak, does feature mature themes. While *I* think that kids in their puberty should have no issues here, it should probably be noted that this is not a happy-go-lucky adventure. As before, the adventure provides ample and well-written read-aloud prose, so if you’re one of the GMs who has an issue with improvising text on the fly, know that this offers some guidance.

Now, the following discussion contains SPOILERS for the module and some aspects of the AP. I *strongly* recommend not reading further if you plan on playing in this adventure. Players should move to the conclusion.

Only GMs around? Great! Massive spoilers ahead! So, the Healing Hands are an order of monks devoted to healing in a godless city; their organization, though, does hide a horrid secret – you see, their powers stem from the divine essence of the fallen god Aether, used to cling to the ever-eroding power of the once mighty guild, left behind in the wake of progress and wealth. Alas, the overuse of Aether’s essence has had catastrophic effects on some of the best and brightest of the guild…and worse, the Seekers of Asmodeus have found out, putting the scandalous secret as a cocked gun to the proverbial head of the order…and thus, the power of a fallen god now lies within the hands of hell’s servants…this far we know as the GM, but in a nice way of unobtrusive exposition, this knowledge about the “alliance” of the two guilds, if not previously unearthed, is recalled by proximity in the opening scene: As the PCs are exploring the great market in the trade ward, they’ll bear witness to a seeress suffering from convulsions, tended by monks of the Healing Hand, while Seekers hold her down – it’s a small detail, but it’s this attention to the small details that shows the care that went into this.

PCs may well insinuate them, depending on the previous modules and their standing with e.g. the guard, into the investigation…or just notice a suspicious book while in presence of the convulsion-plagued, delirious seeress…and an old friend is not well. Thaddeus, previously plagued by prophetic visions via the medium of paintings, has produced something in his rather…dilapidated apartment atop a giant leech-restaurant: A picture of an angel and a devil hugging, which once more represents a type on unobstrusive, symbolic foreshadowing I very much enjoyed. Really cool: The artwork has been reproduced in the module and can be handed out to the PCs…and yes, it does represent a stained glass window. Both of these initial encounters can point the PCs thus to further trails – the book was purchased from the Faculty of Arcana, and a brief investigation should yield the clue that the scion of the noblehouse that produced the rather scandalous and heretical stained-glass window depicted in the painting actually has purchased the second, recently sold book. In golem study, the PCs can touch base with Adam, and just as they’re exploring the place, a detonation will rock the chemistry lab, with a couple of mephitis and an animated robe making for a light-hearted encounter.

In the aftermath of the investigation at the faculty, the PCs should have a good pretense to visit the Clayver manor – namely the fact that, in spite of William’s erratic behavior, tomorrow’s party is on track and, well, the place to be. The social event of the party will indeed be well-attended – Eria, Triast, Radiant Soul – this is a great way to catch up with allies and roleplay to your heart’s content. William, surrounded by vapid cronies, will at one point begin his demonstration, walking those interested past the security cordon to the sub-basement, where an old crone will “aid Wilton”, who, bereft of talent, seeks to sacrifice his brother in a ritual most foul! Any blood spilled will finish the ritual generating an unstable rift to R’lyeh! Being close to the nexus of the rituals, the PCs and those present are spared the hallucinations, as they hopefully stop William and the wicked witch that has used the foolish young man’s ambition and frustration for her dark ends…and the PCs should preferably succeed sans the emerging Gug slaying them all. In the aftermath, PCs can potentially escape the place, and yes, the module remembers the promise that Cthulhu et al. remains optional – the section has a note that allows for the removal of mythos-themes.

Having prevented Thaddeus’ dire prediction, the PCs may wish to return to their ally – but he I nowhere to eb found. Signs of struggle abound. The abduction was NOT a quiet one, and the locals will note that the monks of the Healing Hands and the Seekers were responsible. The trail, obviously, leading to the eponymous sanitarium! This is where the story kicks into high gear: The module accounts for a variety of PC inquiries and involving of key-NPCs in the subject matter; Virgil, a brother of the healing hands, may well provide his keys and note how to get to the restricted section of this place; Triast gets a massive character-development, as the PCs may well witness a rift between him and the High Seeker, who, according to Triast, has become tempted by the power of the Machine, losing sight of the goal of the Seekers. Triast is promptly imprisoned, which can, obviously, change the dynamics of the relationship with the PCs.

As the PCs infiltrate the Santarium, the PCs will find the extent of the corruption of the monks ever more apparent, with foreboding scribbles already telling of the dark shape of things to come and e.g. guildmaster Redgrave, insane, tending a garden of fleshy polyps of blood and viscera (represented by an amazing artwork) being testament to the level of corruption that the monks suffer from; exploration of the place will also yield the chance to break Triast from his Seeker-affiliation, obviously, and the horror of a magical drug and use of the mad god’s body (which may well be destroyed by the PCs!) will make for rather…well, interesting changes, with the components of the machine and a mad doctor and his golem making for bosses. Did I mention the sea-caves-level as an optional means to gain access?

You see, ultimately, the watch will come, and thus, the climax of the module will see a massive trial of the organizations, with the PCs are key witnesses in what amounts to a nice montage-style trial, suffused with a couple of rules-components and notes for reputation systems, if any, taken into account…The Seekers will be stripped of their de-facto watch-privileges, and the most trusted guild of the city will lie in tatters, though the mistreatment of the patients will be hard to prove. Still, the social structure of the city has been shaken to the core…and that is but a glimpse of the shape of things to come…

The pdf closes with notes on the magic items and the bestiary of the critters used.

Editing and formatting are very good on a formal level; on a rules-language level, the pdf sports a few hiccups, but nothing truly glaring – it can be considered to be good, bordering on very good there. Layout adheres to an elegant, nice two-column full-color standard. The adventure sports quite a few nice, original full-color artworks and the adventure comes fully bookmarked for your convenience. The cartography is nice and, as mentioned before, the extensive support of different versions adds a big plus here.

Micah Watt’s Sanitarium is clever – I can see what the author is doing here. The adventure is setting up a lot of the themes and does so in an unobtrusive way, sans page-long exposition dumps. The massive changes to the social strata of the city make for a great twist and provides consequences for the actions of the PCs beyond what we usually get to see. As a stand-alone adventure, this is less focused than #3, but even if you are not interested in the AP as a whole, you could easily cut the module in 2 or 3 sections and scavenge these for your own purposes.

That being said, the adventure, particularly after playing the previous modules, makes for a compelling continuation of the unique themes and flavor that the series offers. With mechanics making use of terrain and smart foes on the mechanics-side, and also sporting a ton of roleplaying opportunities for players, the adventure can be considered to be a success, with various degrees of success and failure possible throughout. In short: This is, in spite of the difficult task this presents to the author, a well-crafted adventure that manages to be versatile and interesting. The few hiccups do not tarnish the structure or fun you can have with the module, and hence, my final verdict will clock in at 5 stars.