What Lies Beyond Reason #1: A Simple Job

What Lies Beyond Reason #1: A Simple Job 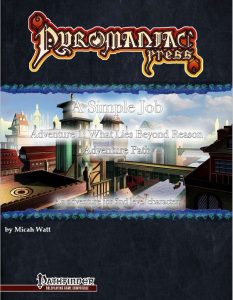 You see, when I stated that this is a “setting the stage type of module”, I was referring to two aspects: This, for one, introduces interesting locations and a general knowledge of the city and also establishes a base-line of contacts/dramatis personae. The timeline mentioned will become rather important, as the PCs choose their respective travel method: From going on foot/carriage) to taking ships through the channel to using air ships or hippogriffon chariots (!!!), en route travel encounters galore are included – and those you don’t end up using can be employed/scaled later…and yes, these are pretty cool. On a nitpicky side, the uncommon vehicles could have used some proper vehicle stats. On the way, the PCs will also be introduced to the methods of the seekers of Asmodeus (and have a chance to foil them at their own game) and may be drawn into the machinations of a bored (and rather nasty) aristocrat… That being said, the travel time summaries etc. are pretty cool!

This would be another place to insert an observation – the bladeleaf hazard does not have its damage type properly codified and it honestly could be a bit more precise in its presentation; it may just be a minor thing, but such small hiccups do show up.

To free him from the entity’s grasp, the PCs will have to eliminate a powerful otyugh. This frees Trevel, but he is still love-struck and convinced that bringing Lysenese the flower will grant him her favor – a fool’s errand, but deductive PCs may realize that the blue flower gained in the beginning is just that sought-after flower. Getting Trevel to pull back will yield the PC’s the favor of the scriptorium. Ultimately, one way or another, Trevel will return and help against the insidious bureaucrat, thus freeing the goods…and concluding this interesting, not so simple job!

Editing and formatting are very good, I noticed no particularly grievous glitches, though the absence of vehicle stats etc. is a bit jarring. Layout adheres to a professional and well-made two-column full-color standard and the pdf comes with a second, more printer-friendly version. The softcover is nice and has neat colors and sports A LOT of really nice full-color artworks. The adventure comes with an archive that contains the maps in a player-friendly, key-less version – big kudos!! The electronic version is fully bookmarked for your convenience.

That being said, this is still a railroad in the vein of Ultima 7-questlines, where quest upon quest is heaped upon another in a linear manner. The respective vignettes are nice, yes, but if your players are like mine, they may not be too happy with this aspect. It does speak for the module’s quality that the vignettes, locations and NPCs can somewhat counteract this structural deficiency, but in the end, a good railroad still remains a railroad. This is a good one, but setting up two relatively linear modules, back to back, isn’t the best idea – it works here, but I was pretty happy to see #2 deviate from this formula. The rating? Well, this ultimately is a good module – it sports a lot of prose and read-aloud text, evocative locales and introduces some seriously cool NPCs…but ultimately, I can’t go higher than 4.5 stars, rounded down for the purpose of this platform.

You can get this module here on OBS!
Endzeitgeist out.