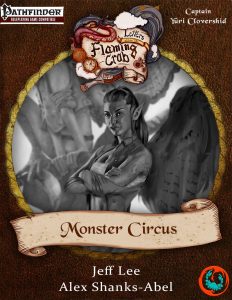 This installment of Flaming Crab Games delightfully gonzo series clocks in at 19 pages, 1 page front cover, 1 page editorial, 2 pages of SRD, leaving us with 15 pages of content, so let’s take a look!

As always in the series, we begin with an eponymous letter from our favorite planes- and dimension-hopping vessel, the UCS Flaming Crab, continuing the charming and well-written meta-narrative that leads us to the topic at hand, which would be Argent & Midnight’s Circus Esoterica and Extravaganza of the Strange. This time, however, Gale and Jilius, the writers of this letter and latest members of the crew, actually also provide a second letter – and we get full stats for the friendly harpy sorceress and her harpy unchained rogue (pack rat) half-sister – as well as an absolutely STUNNING full-color, full-page artwork for the two: Kudos to artists Allen Morris and André Karwath!

Now, this circus, colloquially called Monster Circus, does have, obviously, a menagerie – here, we can find Humongous the owlbear, deathmaw the nasty-tempered manticore, flintbeak the cockatrice and also Crusty and Rusty, the rust monster…and the rust-removal monster! Yep, you heard me! One of the various mini-modules/encounters presented in conjunction with the circus deals with this unique and amazing little critter. I know that many an adventuring group will want one of these as a pet…

The astute reader may have noticed that some of these monsters mentioned above are intelligent…well, yeah, but with a ringmaster like the fully-statted Mr. Smiley, a goblin celebrity lich, there is a good reason why e.g. deathmaw doesn’t maul audiences. And his right-hand man Mr. Nick, a doppelganger expert can help cover up…issues as well. Cool, btw.: Mr. Smiley subsists on a unique diet, if you will: His phylactery sustains the lich in a rather devious manner. How? Well, I’m not going to spoil that!

Among the sights, there would also be Hugo Howl, the werewolf conductor, who guides his 12-headed singing hydra (stats provided) in a unique variation of throat-singing. One of the encounters proposed deals with this constellation: Hugo was fancied by a newcomer to the circus family, a vampire, and tried to resist her advance with garlic. Alas, that made him very enticing for his hydra, who ate him. The vampire was promptly disposed of, but now, no one can coax the hydra to sing! In order to help the circus, the PCs can investigate Hugo’s wagon and solve a nice, rather easy puzzle (or brute-force it, if that’s how you roll). Cool sidequest!

Beyond these folks, there is the living tapestry, whose prophecies can provide help for future encounters; Guk the troll and the bugbear Kursha, herself the tamer, make for interesting beings to meet…and finally, there are the Flying lashley twins – choker acrobats! These two unfortunately have some larcenous tendencies that may need to be reined in, as depicted in another sidetrek presented.

Nice, btw.: The pdf does come with a brief glossary of circus terms.

Editing and formatting are very good, I noticed no glaring issues beyond e.g. the level of the rust-removal monster being once called rust monster. Cosmetic stuff. Layout adheres to Flaming Crab Games’ two-column full-color standard and the pdf sports some amazing pieces of full-color and b/w-artwork. The pdf comes fully bookmarked for your convenience.

Jeff Lee and Alex Shanks-Abel deliver an impressive set-piece to insert into your campaign. The circus and its colorful, weird inhabitants and their stats make for a fun and diverse backdrop to adventure in. The pre-made encounters and playful tone help differentiate the pdf from similar offerings, making it a really fun, evocative backdrop to include in your game. Writing-quality-wise, this is absolutely top-notch and brims with creativity. On the downside, I really would have loved to get a map of the circus and/or the respective wagons – while the lack of a map doesn’t really hurt the pdf, it also represents my one minor complaint against an otherwise truly excellent, fun little offering. Hence my final verdict will clock in at 5 stars, just short of my seal of approval.

You can visit this cool circus here on OBS!