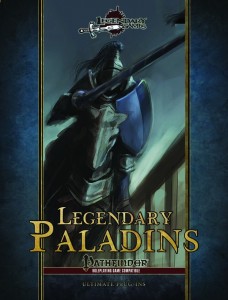 We begin this pdf, surprisingly, not with feats or the like – instead, we get alternate class features for the paladin: Repel Evil, a replacement of smite evil, allows you to protect nearby allies by granting immediate action-activated Cha-mod to AC and saves to both pala and ally, decreasing damage taken from such foes by the pala’s class level. +1/use per day every 3 levels beyond the first. Brilliant ability to represent a mechanically valid bodyguard/protector of the innocent knight – kudos!

For more offensively-minded paladins, there would also be a rather intriguing class feature: Scourges. Not merely a mirror like the antipaladin’s cruelties, these constitute offensive replacements of the mercies the paladin usually receives, including providing temporary boosts to weapons, protecting allies in combat and the like. All in all, this option provides a more than well-crafted alternative to mercies that significantly enhances the appeal and versatility of the paladin class for me – and yes, the wording and balance of the abilities is sound enough for me not to waste any more breath beyond “Excellent!” on the option.

As, historically, the archetypical embodiment of Christianity’s virtues it should also come as no surprise that the class options provided cover ecclesiastical vows: Basically, instead of tying monk vows to ki, we instead have an association, we have the abilities tied to lay on hands uses, with modified (thankfully) vows of poverty austerity and charity as samples. Again, this is a thematically-fitting addition to the subject matter at hand.

The pdf then goes on to introduce the 10-level Paraclete PrC, which gets d10, 2+Int skills per level, full BAB-progression, a limited array of paladin spells and 1/2 Fort-save progression. The Paraclete is intended to be open to non-paladins as well and can be best envisioned as a defensive martial character that gains some paladin-like abilities. The intriguing thing here, beyond the PrCs obvious feasibility, being that the class manages to properly depict a defensive fighter, something PFRPG is not particularly adept at – from significantly increased, scaling AoOs to better attack-interception (including retributive attacks) to delayed negative condition onset, a celestial familiar to the impressive capstone (which nets multiple immediate actions for purposes of In Harm’s Way), the PrC is well-crafted and sports a code AND notes on paladin-interaction – kudos for this well-crafted PrC!

Now obviously, such a book in Pathfinder does need archetypes and indeed, there are more than a few within these pages, the first of which would be the Bloodrager Angel of Wrath. Yes, there are non-paladin archetypes herein, with the angel of wrath gaining Cha-mod to saves, but only versus evil creatures and spells/effects. Conversely, the archetype receives auras while raging that scale with your level. The class also gets smite evil at -4 levels, fueled by bloodrager rage rounds. All in all, a solid blend of paladin and bloodrager. The second non-pala-class herein that gets an archetype would be the Magus, who can now opt to become a Spell Saint, who retains the magus-spell-list, but adds healing and some stars from the paladin’s (and cleric’s) spell-list to the fray: While I am usually not a fan of other classes getting e.g. bless weapon or holy sword, but at least the latter is moved to 5th level. Still, the spells gained are VERY potent. The Spell Saint also receives lay on hands and mercies (at level -2) as arcana – and here, I’m a bit weary. You see, the two levels alone are nothing bad, neither are the spells and the presentation and interaction of lay on hands and the like is impressive; at the same time, the spell saint does not pay for any of these bonuses; there is no drawback to this archetype, nothing exchanged. Sure, the pala-tricks are predicated on the same resource as the regular magus tricks, but it is my firm conviction that the magus should pay for the potent pala-spells gained; particularly bless weapon and a high-crit magus build are nightmare-fuel. I consider this archetype relatively OP due to the lack of trade-off.

Obviously, most archetypes herein are about the paladin, the first of which would be the Auroran, who has light-based spells added to his spell-list, gets scaling SR instead of divine grace, may read the night sky for omen and portents as well as a scaling incorporeal form of light instead of aura of righteousness. Solid archetype. The Celestial Centurion is more interesting – instead of smite evil, he can grant allies scaling bonuses (based on level, capping at Cha-mod) and even change the bonuses granted on the fly and yes, granting teamwork feats is part of the deal, with higher levels allowing for either extended range or multiple mantles in effect. Sharing the (weaker version – nice balancing there) celestial bond, rallying troops and the banner ability complement a well-crafted archetype that may conjure forth the forces of heaven at high levels – a great commander archetype. On the more down-to-earth side of things, the Cottager would be the humble, unpretentious philanthropist. Not only can he create an aura of sanctuary/shield of faith, he also receives the option to making a healing stew that takes a bit, but heals more…and nourishes the targets. Reinforcing structures and mass lay on hands at high levels make these guys suitable for grittier games as well – kudos!

Balancing is also solid here, with channel energy being lost. One nitpick: The pdf does not specify whether the stew can be combined with mercies or not. I assume so, since it is an extension of the lay on hands ability, but clarification would still be appreciated.

The Dragon Knight is not something that particularly excites me personally – basically, you are only half as effective when smiting/lay on hands on non-dragons and replace divine health and mercies with scaling energy resistance. Beyond that, channel energy is given up for a kind of breath weapon powered by lay on hands. At mid to higher levels, the archetype gets a draconic companion and becomes exceedingly lethal while riding said beast. I’m not sold on the concept and am not too blown away by the abilities – mechanically solid, but by the numbers. Also: The archetype suffers from the nemesis-syndrome: Classes geared too much towards a creature type end up either very strong in a campaign or pretty weak, depending on the frequency of, this time, dragons.

The Heavenly Hunter once again is intriguing: The archetype can track teleports from the get-go and counter attempts to escape his wrath via magic: A very function-centric archetype, but one I enjoy – particularly in campaigns with a relatively high amount of magic, this one is awesome…oh and 11th level grants allies the ability to smite evil outsiders when the hunter expends a smite evil for this purpose…ouch!

The Holy Questioner replaces smite evil with judgments and can offensively channel energy against foes of her faith. Additionally, high levels allow for melee rerolls instead of aura of faith – nice inquisitor/paladin combo-archetype. The Verdant Knight receives modified mercy-lists/progressions, favored terrain (instead of divine health) and, at 5th level, a jungle-appropriate mount: Water buffalo, lion or styracosaurus and, as a capstone Fire resistance 20 and constant endure elements. Yes, this one is concept-wise awesome, though I wished it did slightly more with its cool premise – the abilities themselves are simply less compelling than the cool concept deserves. The final archetype would be the winter knight, who also gets favored terrain – but, more importantly, he gets blazing strike, which is a fire-themed smite-like enhancer that ignores all immunity and resistance, while also shielding against the cold. On the nipicky side, the mount-section has a problematic candidate: The winter wolf. Not only is it arguably better than the other mount options, winter wolves are intelligent…and EVIL. The capstone is a mirror of the verdant knight’s one.

Beyond these archetypes, we are introduced to new spells next, with angelic steeds, teamwork feat sharing with divine bond granted companions (and a somewhat confused rules language here: “When you call your bonded creature with your divine class feature, you can cast this spell and select any one teamwork feat for which you qualify.” – that should be “divine bond class feature”, right?)and options to save allies at the cost of your own HP, the section is generally nice. Now personally, I dislike a spell that renders a weapon cold iron – I get the intent, but since the vulnerability towards iron stems from the anti-magic-superstition associated with it, I do cringe a bit there – though that’s just me and will not feature in the final verdict. I do like the option to deal more damage at the cost of half damage to yourself. Flavor-wise, I think that causing foes to attack their allies via Sinful Suspicion should only be an inquisitor spell – while the chances are lower that non-evil characters become collateral damage to this spell’s effects, it remains a possibility, which renders the spell, fluff-wise, better at home with only the inquisitor and not the paladin. Again, this is a personal opinion and will not influence the rating. Tireless Vigil, though, can be rather problematic – while tying the creature benefitting from it to a spot, its immunity to fatigue and sleep seems too much for a first level spell, even though the target becomes exhausted after the 8-hour duration. On the other side, this spell allows for some rather awesome visuals…so yeah…it gets a pass. Overall, a solid section.

The pdf closes with new paladin magic items, spanning the values 4,400 GP to 114,375 GP – and they generally are interesting: The armor of life e.g. can be infused via channel energy to offer retributive damage versus undead foolish enough to attack the wearer. The Shield of Intercession allows paladins to protect allies. I also particularly enjoyed the non-sword “holy X” items that range from warhammers to lances and adheres to enchantments similarly iconic as the holy avenger – kudos here for weapon diversification: E.g. the holy dragonslayer-lance and its exceedingly high resistance versus draconic attempts to destroy it can be considered a neat representation of the concept! Manalces that silence the wearers also should be considered interesting, particularly when escorting that nasty demonologist to his due judgment… The saddle of shared smiting, though, may be a bit too much: Beyond making natural weapons of the mount good, sharing smite with the mount can be exceedingly devastating, particularly with mounts that sport enough natural attacks.

Editing and formatting are very good, i noticed no significant glitches. Layout adheres to a two-column full-color standard with some nice artworks, though fans of Legendary Games may be familiar with some of them. The pdf comes fully bookmarked for your convenience.

Legendary Paladins is a good book. *budoom-dish* Yeah, I know, that one was bad. Sorry, I’ll put on those muting manacles later. 😉 Kidding aside, I was positively surprised by quite a few of the pieces of content in Jason Nelson adn Amber Scott’s book – particularly most of the magic items and, surprisingly, the alternate class options and the PrC definitely are highlights for this book and justify its asking price. Now personally, I wasn’t that blown away by most archetypes herein, but, again, the minor problems some have are offset by the e.g. the great Celestial Centurion archetype. Rules-language is generally VERY precise, as we’ve come to expect from legendary Games, and manages to convey complex concepts in a concise manner, though there are slightly more minor hiccups here than in most of LG’s offerings. All in all, this book remains a good buy, with some brilliant pieces that shine, like the paladins that take them, brighter than some of its other components. As such, my final verdict will clock in at 4 stars.

You can get this nice pala-toolkit here on OBS and here on d20pfsrd.com’s shop!
Endzeitgeist out.