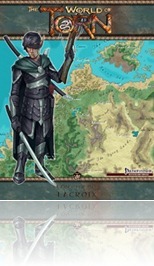 This pdf from Torn World is 13 pages long, 1 page front cover, 1 page editorial, 1 page ToC, 2 pages of SRD and 2 pages of advertisement, leaving 6 pages of content, so let’s check this out!

The first of the “World of Torn”-character packs, this pdf introduces us to the elven warrior LaCroix in 3 different incarnations: In his youngest one, he is 96 (~16 in human years) and has just joined the military. He is a brave member of the elite-squad Molas Saedi and a CR 4 fighter 5 and comes with full equipment.

Taking a look at his second incarnation, at age 132, he has climbed the ranks (now as a fighter 5, ranger 2 Molas Saedi 3) of his squad and can be considered a bit of a loner, but remains conscious of the importance of his tasks and the safety of his brethren. Better yet, we get awesome b/w-illustrations of not only his young, but also of his matured incarnations – awesome pieces of b/w-artwork!

And then, there is the final incarnation, of which we, in addition to yet another beautiful b/w-artwork, we get a full-body artwork you can also see on the cover – at age 232, LaCoix (fighter 5, ranger 5, Molas Saedi 5) has become a bitter man, scarred by battle, angry at the gods for abandoning him, taking his family and friends, and living for the task of rooting out evil while fleeing from a ruler of his erstwhile home who declared him and all his brothers and sister of the Molas Saedi traitors. 100.000 gold are the price of his head and thus, justified paranoia is added to bitterness – to this day, LaCroix has not been captured.

The pdf also includes a new 5-level PrC, the Molas Saedi. The class gets d10, 4+Int skills, full BAB, good fort and ref-saves. The Molas Saedi are a true PrC – the silver brothers can be considered an elite brotherhood of hunters of all things vile – and they have been formerly declared war criminals and with their leader missing, they are mostly living regular lives while still combating the forces of the darkness. The Molas Sadi are armed in finest elven mithril, gain bonuses against monstrous humanoids and evil outsiders, a bonus against fear-effects, uncanny dodge, bonus feats and become scentless. Finally, up to twice per day, they can execute nemesis strikes n sworn enemies, special attacks with class-levels to atk and damage that ignore any form of DR. The class also gets a full-colour artwork.

Editing and formatting are top-notch, I didn’t notice any glitches. Layout adheres to a beautiful full-colour standard and the statblocks are easy to read. The pdf has no bookmarks, which in this day and age feels like an unpleasant anachronism, even at this length. However, the art by Jeff Hill and Serena Verde is STELLAR. The 3 b/w-mugshots of LaCoix as well as his full-colour artwork make for very cool supplemental material and remind me in the most positive way of a certain elven guerrilla leader known from the latest Witcher-game. The PrC, while mechanically not exciting, feels solid, is a nice bonus and most importantly, FEELS like a PrC – like an organization worth belonging to. LaCroix is an interesting character and his muticlass-incarnations feel sufficiently diverse. After reading this pdf, I actually got more interested in the world of Torn and even when separated from this background, the organization and LaCroix should prove to be easy to include in your game. In the end, I’ll settle for a final verdict of 4.5 stars, rounded down to 4 for the purpose of this platform, in part due to the superiority in content/mechanics of RiP’s FoTS and TPK Games’ Infamous Adversary-line.

LaCroix: A Torn World Character Pack is available from: