The Islands of Purple-Haunted Putrescence (OSR)

The Islands of Purple-Haunted Putrescence (OSR) 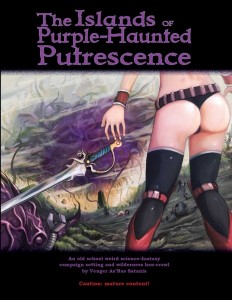 This hex-crawl sandbox clocks in at 110 pages, 1 page front cover, 3 pages of editorial, 1 page Index, 1 page back cover, leaving us with 104 massive pages of content, so let’s take a look!

This was moved up in my review-queue due to me receiving a print-copy in exchange for a critical and honest review.

Well, before we do, let’s make one thing clear (if the cover hasn’t already…) – this is declared as “mature content”…though, at least to my European sensibilities, it does not require this declaration. There are literally more butts in just about any music videos and there is no full-frontal nudity or the like herein. While not particularly tame regarding the subject matter, the artworks are pretty tasteful and subdued and, at least to me, this pretty much is PG-13 – I quite literally could rattle off a number of regular modules with themes as grim or even darker, which made me conclude that this one’s rating mostly stems from a Kali-esque statue’s rendition that shows nipples (gasp) and perhaps the two artworks that do depict the backs/sides of women. *shrugs* That being said, this is, tone-wise, a pretty irreverent book, so if green-skinned slave girls that may tear you limb from limb offend you, this may not be for you – in this way, the cover is pretty much genius: Offended by the female behind on the cover? Well, then this may not be for you….but before you do judge, please consider reading this review…there’s a reason why I review this book…

All right, much like other Kort’thalis Publishing books, we begin this massive sandbox with an array of basically house-rules intended to run with this module. While this book introduces the VSd6-system, which is dead simple – basically, you roll a pool of d6s and take a tally of the numbers, with the highest determining the degree of success/failure and the pool-size depending on the difficulty of the task at hand. The system per se runs fast and pretty decent for this sort of gameplay, though admittedly, after playtesting it, we went for the slightly more refined iteration that would be featured after the release of this book in “Crimson Dragon Slayer“. That being said, advice like situational bonuses for properly roleplayed actions and uniqueness of characters retain their validity. On the character-building side of things, the rather cool idea of dark secrets, as pioneered in “Liberation of the Demon Slayer“, Kort’thalis Publishing’s inspired, but also rather flawed freshman offering, is expanded upon via even darker secrets, which present significant stains on a characters karma and may well represent the very driving forces of the respective PCs. On the narrative side, 20 sample flashbacks and a list of so-called “purple spellcasting” is presented: Basically, this is an add-on to any existing spellcasting system, highlighting the magic-warping effects of the islands portrayed herein – upon spellcasting a d6 is rolled – on a 6, spell-efficiency is enhanced…on a 1 a disastrous failure occurs…and on a 3, something chaotic and odd (think: Purple-themed, icky wild magic…) happens.

Beyond these, quick rules for the instability of dimensional gateways, radioactivity, fighting harder once you’re almost down and for time-travel backlash are provided – though I can dispel any groans this topic may have caused on your behalf if you’re like me and subscribe to the rather complex notions of the concept à la Primer rather than the more popularized and story-hole-prone renditions in popular media: The theme, while existent, is thankfully relegated to the background.

Beyond a relatively decent, if not perfect monk-class, the book also features a d12 critical hit table as well as quirks for magical swords and their odd egos. Oh, and for those of you who think this monstrous meat-grinder is too easy – what about a brief table of permanent injuries, to be heaped upon poor characters unfortunate enough to drop below 0 Hp? Yep, there is quite a bit of material in this regard in the book… but ultimately, this component will not be the one at the focus of your interest, right?

Rather than that, you want to know about these islands, right? Well, I shall oblige, but in order to do so, I will have to resort to SPOILERS. Potential players are advised to jump to the conclusion or be forever traumatized of anything purple before even adventuring on these 3 cursed rocks…

All right, only GMs left? Great! So, in this module/sandbox, we return to the world of Razira, grim and deadly as it was depicted in the previous mega-adventure – only this time around, we dive head-first into true sandboxing, with numerous reasons for expeditions to the 3 islands being part of the set-up – and on it, the whole thing becomes pretty much player-driven. However, the GM actually receives some rather interesting tools – like micro-tribe-relations-generators to determine tribal relationships between e.g. the cyber-sorcerors and the beast-men. Cyber-sorcerors? Well, yes. This is pretty much science-fantasy at its finest, sporting numerous crash-landed alien-ships, strange interplanar travelers, slavers from galaxies far, far away…there are a number of such encounters to be found alongside radioactive material that has mutated local flora horribly (not that this would seem too much out of place here…)…there is a lot to work with.

Now if you’re a purist, you may pretty much easily reskin these components or further emphasize them – a practice you can similarly extend to encounters where a dimensionally stranded adult movie actress is looking for fabled Alpha Blue (Kort’thalis’ most recent supplement!) or to the credit cards that can be found upon other unfortunate souls stranded here. Unfortunate? Well, beyond the warring tribes and diverging technology-levels, there obviously are multiple factions vying for control over the islands, seeking to decipher the true purpose of the black monoliths that dot the landmasses? Beyond the character’s individual story-seeds and suggested metaplots and elements, there are other components that can drive day to day adventuring here – for example the disturbing random events in the night table…or the encounters themselves: When highly lethal and completely bonkers purple harlequin assassins start targeting your PCs, you know you’re in for a treat that is pretty much bonkers…and who wouldn’t consider undead dinosaurs awesome? Basically, you can picture this as a sandbox defined by what just about anything rock/metal-related you’d consider awesome – but it’s not that simple.

The key defining feature that unifies the whole atoll and makes the mega-adventure’s seemingly disparate elements come together would be, obviously, the eponymous purple putrescence: This thing, the Thing That Rots From the Sky, is basically a Great Old One-level deity, potentially all-consuming and awful, with godlike powers – and its secretions, mutating purple rains and mists, generate a climate that suddenly makes flying ape-men with tentacles and the like seem…plausible. The same goes for the various disparate tribes and factions detailed herein, all of which, in some way, can draw upon hooks that tie in with meta-plot components strewn throughout this book..though, as usual for such free-form sandboxes, it remains ultimately up to the PCs how they play this glorious monster…and speaking of “playing” and ” monster” – yes, there are actually rules for initiation into some nasty cults herein.

The book also contains numerous new spells and magic items, which btw. are more precise in their effects in direct comparison to Liberation of the Demon Slayer. The book closes with two lavishly-drawn maps of the islands, one of which is in full-color in the pdf.

Editing and formatting are very good – I noticed no significant errors. Layout adheres to a printer-friendly 2-column b/w-.standard and the interior artwork is unanimously of a very high caliber that captures well the eldritch atmosphere of this islands. The pdf, alas, does not have any bookmarks, which renders navigation pretty much a colossal pain – I’d strongly suggest getting this in print. The print copy is inexpensive for its page-count and very much production-values wise a great deal. The maps are awesome, though travel-directions and similar comfort-notes are not included – much like in the modules of old, the GM has to work with this mega-adventure a bit before running it – though I do not hold that against the book.

So, I’ll just say it: This book hits all the right notes for me. Lovecraftiana? Check. Gonzo elements? Check. Sword & Sorcery flair? Check. Brutal difficulty (your players can’t just die – they can blow up the world!)? Check. This is Venger As’Nas Satanis’ second book and the increase in quality of “Liberation of the Demon Slayer” is vast – the wording s more concise, the bonkers ideas are more pronounced – where LotDS was pretty much geared towards highly lethal dark fantasy, this book’s genius lies in its variety: You could, obviously, run this as an exceedingly dark, brutal and savage module; you could emphasize the gritty, but still heroic components. You could emphasize the strangeness of the place and basically have the PCs tackle this like Redshirts exploring a planet…or you could blend all of them. While heavy metal aesthetics unquestioningly inform the overall base-line and theme of this sandbox, whether you prefer Death Metal or Classic Metal, whether you want a bloody, brutal experience or rather a gonzo, odd one – the emphasis and control lie with the GM. The brilliance of this module lies in the constant skirting of the darkly humorous and potentially completely disturbing, allowing GMs to set their own individual tones, to properly and truly own this massive sandbox.

In my first iteration of this review, I went into more detail regarding the individual encounters and the like, but I decided against retaining this version of the review, since the reading experience of this book is what actually makes the sum of its parts come together like some hideously-tentacled eldritch clockwork. The brilliance of this adventure lies in the fact that it should be an unmitigated mess of tones and concepts and manages to instead blend everything together in a thoroughly unique playing experience instead, one that works best if seen as a whole and not as the sum of its parts.

One note for inexperienced GMs – dungeon-wise and settlement-wise, there is, as with all hex-crawls, a need and requirement to do some work of your own (due to the sheer scope covered)- but if this wonderfully deranged and fun beast doesn’t do the job of getting your creative juices flowing, I don’t know what will. This is pretty much everything that makes the excited boy within this cynical reviewer jump around with excitement and squee and the book runs just as well as it reads…and if you truly need some material to scavenge, there’s a lot out there…feel free to drop me a line if you’re looking for some ideas to further enhance this magnificent sandbox.

My final verdict will clock in with a heart-felt, fist-pumping 5 stars + seal of approval for the print version -for the pdf, detract 1 star for the missing bookmarks.

You can get this inspired, huge sandbox here on OBS!