Islands of Plunder: Scourge of the Steaming Isle

Islands of Plunder: Scourge of the Steaming Isle 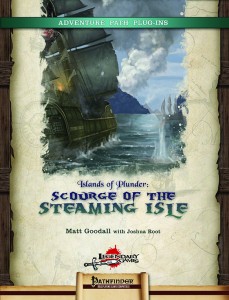 Wait, before we go into the details – what is this series about? Well, essentially, the Islands of Plunder-sub-series is a part of expansions intended for the Skull & Shackles AP, providing sidetreks etc. on an island per island base – they can essentially be considered island-focused mini-adventures that work just as well within the context of a Freeport campaign, Razor Coast or Savage Tide – if it’s remotely pirate/island-themed, these will work – and probably beyond that, but that I’ll take a look at on a case by case basis. This Island of Plunder is intended for 9th level characters, making it appropriate for just about all pirate-themed campaigns. Fluff-wise, this one gels particularly well with Razor Coast.

Sooner or later, PCs tend to make enemies. This holds true for pirate PCs more so than even for most regular adventurers and the PCs had this long-standing feud gone with certain people they robbed…right? Kidding aside, at this level, tying an enemy to the PCs due to their deeds ought to be no problem. The Steaming Isle has become the homebase for just such a selection of ne’er-do-wells – and there’s more at stake than the PCs know…

Arriving at the isle, with vengeance in their hearts, the PC’s are attacked by a water elemental which they can hopefully best before it smashes them and their vessel into the rocky cliffs. Should they demonstrate sufficient competence, Akoria, a gillman oracle shows up and begins negotiations with the PCs – turns out the gillmen want the PC’s rivals gone from the island and be left alone – whether they comply or start beating gillmen troops into submission depends ultimately on the temperament of your PCs.

Entering the bay of the crescent-shaped island, the PCs will have to defeat their opposition in ship-to-ship combat, finally taking the fight to Captain Sculberd and his boatswain! Defeating their opposition on ship, the PCs can subsequently take the battle to the small raider base and its plantation and find the strange circle of stones and ruins – here, one can play the module up for pulpy scifi-fantasy or remain conventional, depending on personal tastes, but within a strange complex of an elder race, a device is sputtering forth flawed ioun stones, using the isle’s volcano to generate the required mystical energy. Alas, so far, the first mate and final boss of this module has not managed to properly fix the device – but he *is* close! While the default assumption of the module is that the machine is destroyed/broken while fighting the strange crystalline/glass shield golem variant, this does not have to be true. Oh, and extra points for DMs properly setting up a sudden influx of unreliable ioun stones among the PC’s enemies, to drive home before this module that they better should take care of the source…

And yes, we get player-friendly maps of the raider base, island and mini-dungeon!

Matt Goodall and Joshua Root deliver a nice, versatile and interesting module here – beyond working as a cool, interesting sidetrek, it has massive potential by further development in any direction by an enterprising DM. The module presents diverse challenges, eerie atmosphere and can be considered a cool, potentially pulpy sidetrek, depending on your tastes. Modular and without any real flaws, this receives a final rating of 5 stars + seal of approval.

You can get this cool sidetrek here on OBS and here on d20pfsrd.com’s shop.