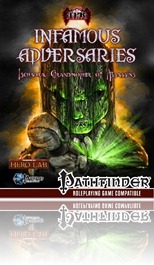 This pdf from Total Party Kill Games is 26 pages long, 1 page front cover, 1 page editorial, 2 pages of advertisements and 1 page SRD, leaving a total of 21 pages of content, so let’s check out!

Ischadra, the latest addition to TPK Games roster of truly vile NPCs in the Infamous Adversary-line is one of the creatures that can be considered a true joy to behold – her downright creepy full-colour cover artwork might seem disjointed when compared to her title, but the introductory, first-person narrative that gives us a glimpse into her demented personality already makes sure that we’re in for a disturbing, creepy ride indeed!

So who or what was Ischadra? Once, she was a mortal woman, serving the god of murders as his very best executioner and guild mistress. Then she died and a cadre of mages wanted to use her and a strange prophecy to gain control of her erstwhile organization of killers – alas, something went terribly, horribly wrong and the free-willed spirit in its soul-bound doll body proved to be impossible to control. Exacting bloody vengeance, the risen murderess extraordinaire in her new doll-body returned to her fold, guiding an organization of murderers as a demented boogeyman that even assassins dread. It should be mentioned that an awesome, creepy nursery rhyme is included in the introduction – narrative gold for the DM and a great tool to evoke a creepy atmosphere!

In her most basic incarnation, Ischadra clocks in at CR 14 as an advanced soul-bound Doll Assassin 10/Inquisitor 2 and is an uncommon foe to say the least – her size alone as well as her construct nature make the grandmother of assassins an intriguing foe to say the least and if you also take e.g. tactical options like her shape changing sword and immunity to dusts of sneezing and choking into account, we get a foe that can be considered not only intriguing, but generally damn cool.

Even better, similar to Rite Publishing’s Faces of the Tarnished Souk-series, we get advancement options in this installment of “Infamous Adversaries” – a CR 17 and even a CR 20-version of Ischadra, (with more Inquisitor-levels), making sure that the hard-to-kill mistress remains a threat for your PCs. 4extensive plot hooks provide different ways to integrate Ischadra in your campaign – from demented prophecies of vampire oracles speaking of dead child-saviours of the murder-gods faithful to subdued allusions to potential entwinements with the dark tapestry, should you so be inclined, to straight up meeting the thing in action, Ischadra is guaranteed to send a shiver down the spine of your players.

What makes Ischadra more intriguing, though, is her network and strange affection towards children – helping the stragglers and underdogs, she might actually help you – but she never forgets and failure thereafter will never be an option. Worse, her insidious network of orphans might actually mean that innocents will willingly defend the creature that might drive them insane with its telepathic ramblings, should it choose to do so.

The supremely-crafted being is not where the pdf stops, though: Instead we are also introduced to her best pupil and quasi-friend/repair craftsman, her current keeper and the swarm of undead, ghostly children are rather disturbing, neat allies.

Speaking of allies: Naelib, Lord of Murders and patron deity to Ischadra (think a cross of Norgorber/Zon-Kuthon) and his Order of the Ebon Hand get a detailed write-up and, even better, the latter a BUNCH of statblocks: From the lowly CR 1 Acolyte, to the CR 6 (3 class-,multiclass characters, btw.) Assassins, CR 9 masters and the current CR 15 leader, which might be considered an NPC of himself and two unique items, we get a bunch of great additional content.

Editing and formatting are very good, apart from a minor formatting glitch, I encountered nothing to impede one’s enjoyment of the pdf. Layout adheres to TPK Games’ 2-column full-colour standard and the piece of full-colour artwork depicting Ischadra could be on a movie-poster- NEAT! The pdf comes with a printer-friendly version, full herolab-support and a vast array of different hyperlinks that make using this pdf on tablets etc. rather easy. The pdf is extensively bookmarked. Ischadra is one of the NPCs that is simply a joy to behold Tom Philips and the team of TPK Games have created a villain that is simply awesome to read – captivating, well-written prose, a concept that has “horror” written in bold letters on it, multiple incarnation and a whopping 6 additional statblocks and 2 advancement options leave nothing to be desired and cementing TPK Games’ Infamous Adversary line further as one of the top-lines for villainous characters. The standard is high and I look forward to seeing whom we’ll meet next! Seeing my lack of anything to complain about and the coolness of the character, I’ll settle for a final verdict of 5 stars, just short of the seal of approval due to the minor glitches.

Infamous Adversaries – Ischadra, Grandmother of Assassins is available from: