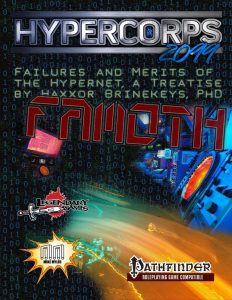 This massive expansion for the Hypercorps 2099-rules clocks in at 70 pages, 1 page front cover, 1 page editorial/ToC, 2 pages of advertisement, 1 page SRD, 1 page back cover, leaving us with a massive 64 pages of content, so let’s take a look!

In case you didn’t know: FAMOTH stands for “Failures and Merits of the Hypernet” – what is the hypernet? Well, think of it as basically the Hypercorps-version of the Matrix, virtual reality on speed. Rules-wise, the hypernet operates as a plane of its own, with alternate time, variable gravity and, surprise, the region is highly morphic. Without the Matrix Magician feat, a character can’t use magic here (which eliminates a whole slew of character options/hobbles them) and the plane employs something we had e.g. in earlier editions of the game: Non-native creatures have their attributes modified: Charisma is used as Strength, Intelligence as Dexterity and Wisdom as Constitution. This puts the hypernet in a tradition with e.g. second edition’s dreamland rules and similar tricks, but also means that you basically have to generate a second character sheet for your character while he’s in the hypernet – unless you’re pretty good regarding on-the-fly modifications. Interesting: The Intelligence modifier also acts as a means to enhance the movement rate of characters in hypernet.

Characters using a proper rig can safely access the hypernet, but have their skills greatly nerfed…so yeah, you’ll be going in properly. Hackers treat robots as basically a powerful pet, granting them a ton of abilities. Hyper attributes are carried over in the hypernet and the pdf codifies rules for jacking in and out, for faulty transfers and the potential hazards you can encounter within the depths of the hypernet have been codified in PFRPG as e.g. persistent haunts, as traps, etc. Concise rules for rapid jackouts, server crashes and global effects to modify the hypernet can be found: From viral infections to global bandwidth issues and the creepy jarrikol-effect, the material presented here is pretty far-out and cool. (“Jarrikol” or any variation thereof in the net can conjure forth basically a horrid, reaper-like god-like ghost in the machine…which is pretty amazing…)

The annihilation wipe cubes and the concise rules to control them are neat and we move on to a mini-bestiary, which includes a blend of previously released and novel material – here, Death Sentries can be found, Tiny constructs that can annihilate digital assets. Classics like the gargantuan robotic T-rex can be found here alongside reprints of sec-jackers and proxies. The thrillvirus from “Thrillville or Killville?” has also been included, alongside unbound proxies, the Deathwing character, Edgar Allen Poe, etc. – however, I should note that there are new ones here: Argus, for example, ostensibly created by Tesla, the halfling netjacker enganyar…etc. The pdf also contains a couple of sample drones for netjackers and the pdf does include the netjacker base class, which I took apart before.

The pdf does also list a variety of different servers (basically sub-planes of the hypernet) and, oddly, the netjacker is jammed right into this chapter, which is, organization-wise, rather weird and, imho, kinda annoying – you alternate between one such server, then class information, then another server. That being said, the respective servers are pretty interesting and provide some new material: While the devilish darknet, datacorps, paradise 1, thrillville, xypher and Veranthea are included (yep, the Veranthea Codex setting’s material is represented as a hypercorps MMO…), the new ones deserve special mention:

Aquatica, the underworld world, contains Atlantis and generates spontaneous vortices. Celestial estates represents a devious plan to sucker in souls of those who’d prefer a digital afterlife – pretty creepy! The grand archive would be a colossal collection of media…but with premium content and addictive properties, it can also be rather problematic. Harsanath houses seemingly all-powerful data judges. The curious, erstwhile pastoral Maliku, flavor-wise somewhat Wild West-ish can provide, curiously, instant hypernet conversions of material, while the unyielding green enhances druid-y tricks and sports a rather erratic time. We also are introduced to the cybermagic bloodline for sorcerors, which makes the sorceror immediately competent, via feats and spells, in hypernet – the bloodline powers focus on modifying planar traits of the respective hypernet servers. The chapter also reprints cyber ninja and samurai. Cybersurfer monks use Int-mod for AC, but loses the level scaling and the archetype’s flurry is restricted to working only while on a cyberboard. They slightly reduce their unarmed damage, but gain hacking talents from a limited list, with higher level options unlocking new ones. It should not surprise anyone that the archetype receives enhanced skills. 11th level unlocks a drone that also acts as a hoverboard, though the particulars of this ability are a bit opaque and could use a bit more clarification. The data junkie would be a hypernet bard and similarly, the digital detective investigator represents a hypernet specialist, who has less extracts outside of the hypernet, but gains some nice techy abilities.

The droneminder netjacker archetype loses access to proxies, but are specialists at using drones and the mechwarrior is reprinted herein. Noob krushers are netjackers who eschew the use of robots, using a blending of studying foes and inflicting bonus damage to them…and they, unsurprisingly, are expert programmers. Hackhunter rangers are basically rangers that specialize in the digital world, gaining a proxy at higher levels instead of a regular animal companion. Intuitive hacker barbarians receive a variant rage that makes Strength and Constitution match their Int-scores, for potentially very potent combat capabilities. Technoclerics would be the digital construct-specialists of the clerics, getting the cybernetic domain, variant class skill list and applying the healing/spontaneous conversion tricks to constructs instead. EDIT: Mea maxima culpa – I had a bad brainfart here. Technokineticists are electricity specialists that can render their damage versus robots et al. more reliable. On a minor complaint, there is a spell reference that is not properly italicized and personally, I think that the class-specific infusions etc. would have been better served being formatted as standard infusions.

The pdf recaps the digital skill uses and the feats allow for program creation, concealing yourself as a digital asset and Electronic Telepath allows for the at-range activation or deactivation of devices. while Server Tactician interacts with server traits. Matrix Magician has been reprinted for your convenience.

The pdf also features a variety of digital items, from counterfeit credchips to digikeys and online drugs (matrix dust) and root code packages – per se pretty cool. Drapa’s nanosymbiotes make for an intriguing itemclass, occupying teh body slot in various iterations, gaining special abilities. If you know MGS, well, then you’ll probably be smiling right now. The pdf also features new hypernaut powers – the senses-enhancing cybersenses, more efficient crafting in the hypernet, retaining superior scores of physical attributes in the hypernet, gaining a metric ton of detect tricks and turning yourself incorporeal can be found here. As the only tier 2 ability, independence from jacks for hypernet access alongside some SPs can be found. Somewhat odd – while italicizations of spells are pretty concise for the most part, there are some oversights. 9 hyperflaws are also included – making this section per se pretty neat.

We close the pdf with the pregens from “Thrillville or Killville?”.

Editing and formatting are good – while I noticed a few instances of glitches and material that could be slightly streamlined, as a whole, this is a well-made file. Layout adheres to hypercorps’ pretty busy 2-column/1-column/3-column full-color standard (depending on the needs of the pdf), with decent full-color artworks. The pdf comes fully bookmarked for your convenience.

Mike Myler, with contributions from James Lewis, Michael McCarthy and Savannah Broadway, has crafted a supplement that leaves me somewhat torn. I don’t have a problem with the reprinted material, as the collection collects the thematic material herein. There are a few aspects that could have used a bit of streamlining though – I really hate how the netjacker class has been spliced into the respective server write-ups, blending player-information with potential spoiler-territory. These glitches do drag down the pdf a bit and the supplement has another issue: The hypernet, as written, is cool, but not particularly player-friendly – you basically have to invest in it to work properly (feat-tax) and class abilities are required to work at peak efficiency. For one-shots, this is not an issue, but for longer campaigns, this invariably results in discrepancies between PC capabilities – and if you invest heavily in the Hypernet’s options, you lose out in real life adventuring. This is, to a certain degree, a system-immanent issue of the rules as presented, but I honestly wished the pdf had some alternate, smoother rules for hypernet use.

In my tests, you either rock hard (if you focus on the hypernet) or suck hardcore (if you don’t) – and the requirement of basically an extra iteration of the character for use in the hypernet doesn’t make long-term use too comfortable. When this was just an aspect of the overall world, you could partially overlook it; when used in a one-shot, it doesn’t matter, but as a whole, it may make sense to have hypernet and regular characters for optimal fun. This renders the AMAZING variety of options less user-friendly than I’d like it to be – picture it as requiring a second character/needing to jump through hoops whenever you go planar adventuring. Whether you like that or don’t remains a matter of taste. Still, I honestly expected a bit more from this pdf – with a title like the acronym, I hoped for more awareness of the original system’s limitations and more clunky components. As a whole, this can either be worth it for you, or result in a slightly disappointed shrug – hence, my final verdict will clock in at 3.5 stars. As a person, my disappointment with the file exceeded my enjoyment of the cool new servers, but I’d usually round up. However, the accumulated editing glitches and asinine netjacker/server-chop-up-presentation honestly galled me to no end. Additionally, all aspects that really blew me away had been released before – the new material isn’t bad, but did not blow me out of the water; it doesn’t have the same amount of creative ésprit that Mike’s writing usually shows. If you don’t mind the above, round up – as a whole, in spite of liking a lot herein, I can’t bring myself to round up – hence my official verdict will be 3.5 stars, rounded down.