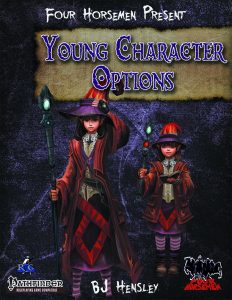 This pdf clocks in at 15 pages, 1 page front cover, 2 pages of SRD/editorial, leaving us with 12 pages of content, so let’s take a look!

We begin this pdf with several observations regarding how childhood in a quasi-medieval setting would look like – and if you’re a bit of a history buff, you’ll know that even games thus basically focus on teaching skills. In a given fantasy setting, this is twice as important – after all, the world is a dangerous place. The age-range for children of the various core-races receives a more fine-grained coverage and the respective entries do cover how the respective childhoods do look like – the cultural specifics ring true and sound.

It should be noted that this pdf does champion an approach that eliminates the penalties associated with young characters per the rules of Ultimate Campaign. Note, however, that this is not simply a fluff-operation: There actually is a trait to produce the rules-foundation for properly powerful young characters. The pdf also sports an assortment of intriguing traits – the best two of which, in my opinion, allow for easier passing off as small folk and, exceedingly intriguing: Fool detect alignment spells. Damien? Yes! I also particularly enjoyed the “pass unnoticed” trait -overall, the options provided here are concise and well-crafted.

The pdf also sport an array of prodigy-feats: Basically, these feats represent being a prodigy in a given region, including constant favored class based gaining of Perform ranks. Further feats let you perform a select array of combat maneuvers sans incurring an AoO, but at the cost of extending the action required to a full-round action. Interesting here: The feats actually provide synergy with the respective Improve…-feats. Being a prodigy of spell research is also interesting.

The pdf does feature a significant array of archetypes – the ageless oracle is all about…not aging. The archetype has a list of bonus spells that focuses on necromancy. The archetype does have a unique curse: The poor oracle never ages. Their revelations provide options to provide resistance to aging, including options to make the targets look younger or inflict aging upon adversaries.

The Destined Blade magus may not use his arcane pool to magically enhance his weapons (and only has Int-mod skills), but is instead defined by the eponymous destined blade – this blade increases over the levels, including scaling enhancement bonuses and three categories of blade abilities. Interesting here: The destined blade, the signature weapon, may actually be 2-handed, modifying spell combat appropriately, but overall pays for the power granted by the blade with a lack of a spellbook and inability to add new spells to the destined blade that works as the substitute for the spellbook.

The reincarnated master monk would be a creature that comes into his power early and thus has a modified unarmed strike damage and a rather intriguing option to control reaching adulthood whenever the class gets a bonus feat. Similarly, tapping into visions of past lives and the knowledge from these days is rather intriguing.

The street rat rogue does suffer from one decreased physical attribute chosen at 1st level, but does gain Endurance and Improved Unarmed Strike. They also are great pickpockets and gain scaling bonuses while within a city; once again, adulthood is an option. The wunderkind wizard may start with less spells in the spellbook, but also do get the option to spontaneously apply metamagic feats to spells they prepare, even if they do not have the respective feat. Like the former archetypes, the wunderkind does have the option to reach adulthood at certain levels, with corresponding attribute bonuses.

Editing and formatting are top-notch, I didn’t notice any formal glitches and rules-language is sufficiently precise – the worst deviation from standards I found was “drawing attacks of opportunity” instead of “provoking” – and that’s cosmetic. So no, not complaining for once! Layout adheres to Rogue Genius Games’ two-column full-color standard and the pdf sports several absolutely gorgeous, beautiful full-color artworks. The pdf comes fully bookmarked for your convenience.

BJ Hensley’s little booklet on young characters intended as PCs (as opposed to Ultimate Campaign’s more restrictive rules) is tight, concise and well-written. The crunch herein is solid, gets bonus types right and the pdf does feature several fun options for young characters. The traits, feats and archetypes in this book are well-crafted and, barring any proper complaints to field against this pdf, my final verdict will clock in at 5 stars.