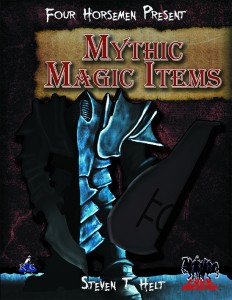 This installment of the Four Horsemen present-series clocks in at 9 pages, 1 page front cover, 1 page SRD, 1/2 page editorial, leaving us with 6.5 pages of content, so let’s take a look!

We begin this supplement with a collection of new legendary items, 4 to be precise. The first of these would be Hirasthe, a blade of hardened obsidian, driven to create sorrow, anguish and undermine morality – so the blade’s a politician…Just kidding. Half. Kidding aside, the blade is a brilliant liar can use glibness and magic jar with surprising efficiency…and quite frankly, I can see an adventure where this blade, not the wielder, is the primary antagonist. That’s a good thing, as it should serve well to drive home how well this evil blade is crafted. The mighty parapet is also rather interesting in that you can expend legendary power to make it basically form a square fortress of protection around the wielder – awesome and pretty cool. The Ring of Razors (provided in 5 variants from +1 to +5) and greatly enhances claw/grappling/natural attack capacity as well as offering legendary power based, bleeding damage causing barbed wire grapples. Love it! Oh, and since this is a Four Horsemen-product, we also get a damn cool classic: Wormwood. No, not the comic-series, but the staff/greatclub that has delightfully apocalyptic SPs as well as drain/damage/disease-etc.-suppression, as befitting a herald of the end-times.

We go on to 3 new mythic weapons – the first of which, the brush blade, can annihilate or heal vegetation. The crushing mallet can strike as a larger weapon and the scimitar quicksand discorporates into sand that enables for dirty trick combos, only to immediately recombine. The distracting plate may hypnotize foes, but it makes it hard to go unnoticed, while the sundering shield can reflexively sunder weapons unfortunate enough to strike it.

The pdf also sports a rather diverse array of mythic wondrous items: The Boots of Time and Space not only prevent slowing, they also allow for perfect Zero-G-navigation, while the cascading cloak, seemingly woven from fabric depicting a waterfall, can unleash such a torrent upon foes. A crown that enforces unworthy creatures to stay their distance, an iron locust figurine – nice! There would also be a variant on the hand of glory-theme, the hand of the rogue, which can be animated as a rather grisly master thief – particularly nice for groups lacking a more…let’s say, discreet, character.

Scrivener’s tools infused with the very authority and power of an empire can be utilized to draft truly compelling documents and there also is a book here that allows you to use CL to determine level-dependant variables, even if they exceed the cap of the spell – which can be a bit ugly. A mask that dishes out death and animates the victims as subservient undead will make for a fitting regalia for necromancer lords. There is also a helm that is narrative potential galore: The Unyielding helmet, which supersedes the need of allies to withdraw and actively compels them to stand their ground. Know that dwarven last stand? How those peasants held the fortress versus the screeching hordes of the undead? Well, this helmet may just be the reason they made it…but can you use such an item, even if it costs the lives of those thus forced to fight? Finally, the Wild Charm is basically a super amulet for nature-characters – skill-bonuses and improved senses are solid and possess companion makes for a solid, if somewhat unremarkable final item.

Editing and formatting are very good, though once again, the bolding is off – the first paragraph of the items is bolded for no discernible reason, which is somewhat jarring on an aesthetic level. Layout adheres to the 2-column full-color standard for the series and sports solid stock art. The pdf comes fully bookmarked for your convenience.

Steven T. Helt delivers in this pdf – the mythic items herein, for the most part, are truly intriguing – even in the case of items that traditionally act as spells in a can like staves, the book sport unique stories and benefits that elevate the items beyond the bland, gray default to something beautiful and evocative. While not all items herein reach the superb, lofty realms of excellence, the majority of them actually do, with only 3 ranging in the solid/good-but-none-too-remarkable category – that means this pdf consists mostly of evocative excellence, of fun concepts, some of which inspire by means of their very crunch and presentation -and what more can you ask from such a book? While the small flaws cost this my seal of approval, it is still an excellent pdf, well worth a final rating of 5 stars.

You can get this neat collection of mythic items here on OBS and here on d20pfsrd.com’s shop!