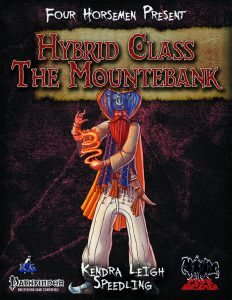 This hybrid class of mesmerist and unchained rogue clocks in at 14 pages, 1 page front cover, 1 page editorial, 1 page SRD, leaving us with 11 pages of content, so let’s take a look!

The mountebank gets d8 HD, 6 + Int skills per level, proficiency with simple weapons, hand crossbow, kerambit, rapier, sap and sword cane as well as light armor. The class gets ¾ BAB-progression and good Ref- and Will-saves and begins play with consummate liar and hypnotic stare. 2nd level nets Weapon Finesse and finesse training with one weapon group for using Dex-mod to determine bonus damage. 2nd level also nets patter: The mountebank begins prattling away as a move action (maintaining it is a free action) and may maintain patter for class level + Charisma modifier rounds – all spellcasting and SPs within 30 ft. of a mountebank using this ability requires concentration checks to cast. 5th level penalizes this check by -2 and 8th level allows the mountebank to focus on a single target, potentially confusing it.

3rd level nets sneak attack, which increases by +1d6 every 3 levels thereafter. At 3rd level, the mountebank also gets a variant gaze that causes the target to lose Dex-mod to AC being flat-footed versus the mountebank, and the mountebank only, though this stare needs to be maintained as a move action. 8th level nets a suggestion stare – with a caveat that prevents abuse. At 10th level, the class becomes superb at lying and requires CL-checks from those using magic to coax the truth out of them. 14th level provides slippery mind and 16th level allows the mountebank to not be remembered by those he interacts with. The capstone nets permanent concealment and the ability to target two creatures with a mountebank trick.

The class begins play with one trick and gains another trick every 3 levels thereafter and may implant ½ class level (min 1) + Charisma bonus such tricks per day. The mountebank can implant them at a range of 30 ft. as a standard action, which a Charisma-governed Will-save DC. Trigger range is medium spell range, just fyi. These allows the mountebank to make targets suffer half damage inflicted, for example – big kudos for getting the rules-language right here! Heavily penalizing Sense Motive, causing instant paranoia, fear of the dark, telepathic interrogation, causing the target to be addicted to the mountebank’s presence (!!), implanting hatreds or trust, disguising the target or adding additional damage to the damage the target takes – these are complex rules-operations that handle evocative, really cool tricks and feature e.g. variant mirror images that don’t disperse when hit, etc. – really, really amazing array of options here!

At 7th level, those tricks may be implanted when sneak attacking foes, imposing a penalty to the saves versus the tricks…and even cooler, at 14th level a trick thus implanted does not count against the mountebank’s daily maximum of tricks implanted OR towards the maximum number of tricks that may be maintained at once.

At 5th level, the mountebank may use more concurrent tricks, upgrading the limit to 2, which increases further at 9th level, 13th level and 18th level, though each creature may only be affected by one trick at a given time.

Beyond the tricks, the class has more player agenda to offer, namely the chicaneries – at 1st level, the mountebank chooses one of the 4 chicaneries provided. These represent linear ability gains and provide a combination of bonus feats (with retrain caveat!), 1/day spell-like abilities that are governed by Charisma and act as psychic spells and unique abilities. 6th level provides the option to advance in the chicanery path, unlocking the next ability…or to choose a new chicanery, gaining the level 1 ability there. The paths provide 4 steps in advancement (minor, moderate, major, supreme) and the mountebank gets further advancement options at 11th, 17th and 20th level, which means that full-blown specialization in one chicanery is not expected. Liar’s gambit provides alignment masking and further inscrutable tricks; the grifter’s hustle nets negotiation and intimidation options; cat’s paw specialists are all about Sleight of Hands and Stealing in combat, while those that choose dodger’s strike are Stealth specialists.

Among the feats, there is one option to advance a chincanery, but only if it is one level lower than your maximum advancement – no abuse possible. Exluding allies from patter, gaining an additional trick or selecting from unchained rogue talents complement the meaningful feat options.

The pdf also sports two archetypes: The cardsharp is locked into one chicanery path, but changes its benefits to instead provide Profession (gambler) boosts, fast fingers and the option to form a deck of cards into a +1 keen magical weapon, which may later be enhanced. Instead of finesse training, we get 1/day forcing a target to roll twice and accept a result (+1/day use at 12th and 20th level). Instead of the 7th level trick, the archetype may 1/day as an immediate action roll 1-3 additional dice when making an attack, save or skill check, using the highest die roll, but at the cost of being forced to use the lower ones for a number of consecutive rolls equal to the number of dice chosen – cool!

The second archetype would be the mentalist, who is locked into cat’s paw or liar’s gambit, casting the SPs granted by the chicanery at +1 CL. Instead of consummate liar, they get a boost to Perform and on Bluff/Sleight of Hand checks used as part of a performance. The archetype may use patter to instead sow thoughts, with 8th level allowing for the focus on a target to daze it. Instead of sneak attack, trick attack and improved trick attack, the mountebank gains the option to cast spells as a mesmerist of his level, but only divination, enchantment, illusion and transmutation spells. 4th level nets Psychic Maestro and 10th Psychic Virtuoso, replacing the tricks gained at these levels. 16th level replaces incognito for an illusory double that may perform a physical ability-or skill check – basically a Schrödinger’s situation, where you determine which was real afterwards.

Editing and formatting are top-notch, I noticed no issues in either formal or rules-language criterias. Layout adheres to Rogue Genius Games’ two-column full-color standard and the pdf sports a couple of nice full-color images. The pdf comes fully bookmarked with nested, detailed bookmarks.

Kendra Leigh Speedling delivers with panache aplomb! The mountebank is a fantastic class – it manages to be recognizable as a hybrid class, while still sporting its very own and distinct identity AND playstyle. The class tackles complex concepts and remains easy to grasp and play while doing so. It sports innovative and fun rules and tricks that no other class can pull off. It plays really well, in spite of the notoriously difficult to fill skirmisher/debuffer role. In short, this represents one of the best, perhaps the best hybrid class I have reviewed so far. The only class I’d consider to be on par regarding this amazing offering would be Purple Duck Games’ Vessel. Yes, that good!

The mountebank is a glorious class; it is inspired, interesting and, most importantly, fun – 5 stars + seal of approval, given sans hesitation!