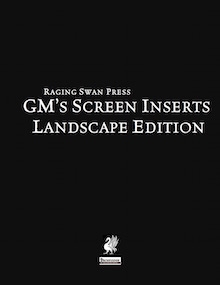 What do all screens I have for PFRPG have in common? They never seem to list the modifiers I actually need.

Enter these screen-inserts: The landscape format inserts provide a list of action types by abilities, skills and spells, movements and mounts, miscellaneous, attacks and equipment uses alongside maneuvers, identifying monsters and movement rate modifications, covering just about all action types.

Page 2 covers combat modifiers to attack rolls, including a separate table for two-weapon fighting and AC-modifiers as well as default concealment miss-chances and a splash weapon miss diagram. DMs will probably also appreciate the 3 advanced, giant and young simple templates receiving a summary. The list of common conditions alongside their effects (including grappled, energy drain etc.), but excluding the more obscure dazed and cowering conditions in both iterations. It should also be noted that either iteration of the screen lacks the rules for feinting DCs (though it’s covered among the action-tables) in either maneuvers (though technically, feinting is not a maneuver) or Bluff as a section. Conversely, demoralizing foes via intimidate would constitute another component that would have imho warranted a short entry – intimidate is completely absent from the screens.

Page 3 covers magic and treasure, with lists providing the identifying DCs for items and auras, concentration-modifiers and yes, an extra table of alignment-detect-spells. The page also provides the battle-mat-style square-representations of 15-foot cones, 30-foot cones, radii from 5 – 20-feet, and ways to align 30-foot-lines.

Page 4 covers the skills – but not all. Rather than duplicating the default screen, Acrobatics, Climb, Ride, Swim, Perception, Bluff, Diplomacy, Sense Motive and Disable Device are covered, i.e. the skills that have the most impact in combat and the least cohesive structure in DCs. It should be noted that the portrait-screen-inserts lack the Sense Motive entry, meaning you’ll objectively be better off with the landscape version.

I’m gonna deviate from my usual reviewing standard and just mention that the pdfs come with versions for both printer and screen-use as well as a separate credits pdf. Creighton Broadhurst delivers a significant step up when compared to PFRPG’s default screen – the tables herein proved to be significantly more useful than those of the default screens. At the same time, each screen-insert-style product needs to be very selective with what to include and what not – and ultimately, I found myself wishing the screens had not included the prep-time-associated simple templates and instead provided entries for demoralizing or feinting targets – yes, the rules are simple, but with them, one could consider this one pretty much complete. As provided, it is a step upwards and well worth the investment, but it falls slightly short of what I’d subjectively consider perfection. I get the restriction regarding space the portrait-version suffers from, but providing slightly less content that the landscape version makes a difference for me. My final verdict will hence clock in at 4.5 stars, rounded up to 5 for the landscape version, rounded down for the portrait version.

You can get the landscape version of the screen-inserts here on OBS and here on d20pfsrd.com’s shop!

You can get the portrait version of the screen-inserts here on OBS and here on d20pfsrd.com’s shop!