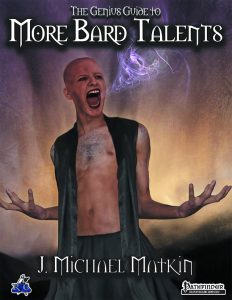 This expansion for the Talented bard clocks in at 18 pages, 1 page front cover, 1 page ToC, 1 page editorial, 2 pages of SRD, leaving us with 13 pages of content, so let’s take a look!

We begin with 3 edges in this one: Enrapturing performance focuses the effects of bardic performance on a single target, increasing the potency against said target – said performance cannot be maintained at the same time as a regular performance. Unfortunately, the ability is pretty imprecise: The ability talks about emulating certain performances with the ability at greater effect, implying that it can use these…which would not be an issue with a vanilla bard, but talented bards do not necessarily get these, so there is some unnecessary ambiguity here. Limited replacement of bard spells with ranger/druid spells and a familiar would be the other two edges.

The pdf also features new talents – and unlike some of the “More”-series of expansions, this one does go into some archetypes not featured in the base product, with hoaxer, silver balladeer, thundercaller, negotiator, etc. having their talents and edges codified according to the talented system, with divas, duettists etc. being covered. NOw, as a metalhead, I couldn’t help but smile at Headbasher’s Ball – while performing, allies within 30 ft. may use the bard’s Perform instead of Bluff or Intimidate to feint or demoralize…which is pretty damn cool. Powerful, yes, but come on! Balanced bardic healing can be found in here as well. Another note that should be relevant to the interests of some of you out there: This book actually does cover the skald’s raging songs and unlocks them for the talented bard – from incite rage to song of the fallen.

That being said, organization is not as precise as usual for these books – there *is* the distinction pertaining advanced talents, which are unlocked at 10th level and usually collect the talents that have a prerequisite of 10th level or beyond – song of the fallen, for example, should be in this category, yet it is listed among the regular talents. While this remains the exception, it was still odd to see. Thankfully, the wall of text organization by theme-box is included in the deal. Fans of OA will be glad to hear that the Phronologist’s tricks are included in this deal as well.

The capstones contain the end of the savant’s avatars of legend ability as well as immunity to aging and drugs (+ superstar performance) and a pantomime equivalent of imprisonment.

Editing and formatting are very good – while not always perfect in formal criteria, there are no significant botches to be found here. Layout adheres to Rogue Genius Games’ two-column full-color standard with okay stock art and the greyish background with pronounced borders, ut pretty high text density. The pdf comes fully bookmarked, but not with individual bookmarks for the respective talents/edges.

This is the first book by J. Michael Matkin I’ve read and it is precise, well-crafted and generally a more than welcome expansion for the talented bard. While, personally, I would have preferred an individual installment for the skald for a slightly more nuanced take on the options of the class, I can live with this iteration of the concepts. In fact, I probably would adore this pdf significantly more, had Stephen Rowe not stepped up the whole game in the “More Witches Talents”-book, which simply ranks among the most inspired witch-supplements ever penned. Compared to that one, this book represents some solid craftsmanship and welcome expansions and it does show some cool, unique ideas…but it does not reach the level of mind-boggling awesomeness.

So yes, fans of the skald, phrenologist and similar archetypes left out of the core talented bard that wanted them integrated into the talented line should consider this as a must buy. As a whole, it is a good expansion, but one that delivers more in the craft and less in the artistry department. I thought long and hard and ultimately, I consider it to be a good file, bordering on very good. Personally, I value artistry more, so, as a person, I’d round this down. As a reviewer, though, I do have an in dubio pro reo policy and tend to be slightly more lenient on the first book of an author I get to analyze…so yeah, my official verdict will round up from 4.5 stars. You’ll like this if you’re not spoiled rotten like I am from the witch-installment. 😉

You can get this expansion for the talented bard here on OBS!