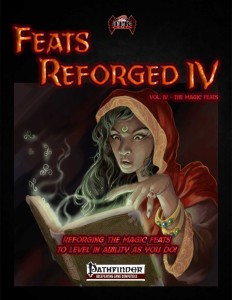 The fourth installment of TPK Games’ series that redesigns feats to scale with character levels covers the feats from Ultimate Magic and clocks in at 28 pages, 1 page front cover, 1 page editorial, 1 page SRD, 3/4 of a blank page, leaving us with 24 1/4 pages of content, so let’s take a look!

All right, by now you know both the basic principle of the series and how the series works: Basically, you get additional benefits at certain character levels, with common progressions being 7th and 14th level; 9th and 16th level also constitute a common progression ladder and some feats also increase in potency at 18th level or 10th and 17th level – basically, the idea is a rough 7-level progression for most of them.

Now regarding the scaling benefits, much like the third installment of the series, we get effects that go thankfully beyond straight numerical escalation – Extra Ranger Trap, to give you an example, adds +2/day uses of ranger traps at the first scaling threshold and later increases their DC. Action-economy progression for e.g. Fast Empathy also deserves mention. Gliding Step’s third progression allows for the expenditure of ki at 18th level to ignore all difficult terrain for 1 round in addition to its straight scaling benefit – which makes sense at such a high level. Remote Bomb’s scaling distance (only requiring line of effect), is also nice, and Resilient Eidolon allows you to keep your eidolon around while you sleep at higher levels.

In fact, some of the feat-upgrades herein allow for whole new builds to be efficient – the Shaping Focus’ scaling, to name one, allows for up to character level = druid level for the purposes of wild shape – at 18th level more than okay, especially considering the solid scaling step before. So yes, this book does have its moments, where it shines and does so brilliantly. At the same time, this one is less refined in its rules-language than Vol. III: Spell Bluff’s scaling options e.g. mention that “you gain no negatives when dueling a caster whose spells are modified by Silent Spell or Still Spell” – the thing is: The vanilla rules for spell duels do never result in “negatives” – did the author mean “penalties”? I don’t get how this one is supposed to work and reading up on spell duel rules didn’t help. On the plus-side, Starlight Summons getting concealment and later Hide in Plain Sight? That’s quite badass. Versatile Channeler getting rid of the -2 penalty for channel purposes at 14th level also is rather interesting.

I also like the decision to make Word of Healing, at 14th level, apply at full potency at a range of 40 ft. Adding two spellblights via Blighted Critical can also be considered a rather nice option in my book and Channeled Shield Wall’s scaling bonuses and high-level DRs make sense and implanting bombs is nasty – after 24 hours, long-term implanted bombs no longer count towards your daily limit – evil empires and villains will make ample use of this one…

Editing and formatting are very good, I noticed no particularly glaring glitches, though there are a couple of italicizations missing. Layout adheres to a printer-friendly two-column full-color standard with solid b/w-artworks thrown in. The pdf comes fully bookmarked for your convenience.

The Feats Reforged series is hard to review – basically, you have a bunch of feats that you already know and add scaling benefits to them – as a reviewer, what to do? List feat upon feat’s scaling options? Boring. Complain about base feats? Unfair. However, if you’re a bit familiar with me and my work, you’ll probably have guessed correctly that I do loathe quite a few feats out there – and Ultimate Magic is partially banned at my table for a reason, so no, I don’t have a high opinion of the source-material this pdf draws on.

At the same time, though, as a reviewer, my task is to determine whether the feats herein do a good job at translating the source-material to a system wherein the feats scale. It is in this context that I’m rating this book. And it is in the context that I can say that Neal Litherland and Brian Berg have done a good job.

While there are some rare and minor hiccups among the formal properties, the vast majority of the scaling feats herein makes sense and even adds dimensions and new build options to the base feats. It is with new effects and intriguing effects beyond the numerical scaling (which is usually implemented in a well-done manner) that this book shines. While I STILL refute, adamantly, I might add, the series’ claim that unilaterally adding these to the game does not change balance (this is wrong since some characters frankly get more feats and thus more use out of scaling feats), I gladly acknowledge one fact – even in the cases where I frankly dislike the base feat, the reforged iteration tends to add something new, something more to the table.

A further benefit of this series is that it helps in rare-magic/low-magic games to keep the scales – though wide-scale implementation for the monsters etc. will be a lot of work for the GM, I can see a lot of tables that will welcome this particular aspect over the annoying Christmas Tree syndrome. How to rate this book, then? Well, ultimately, we get a lot of good material here. While personally, I preferred Vol. III and considered its formatting/wording a teeny tiny bit more precise, this still constitutes a worthy addition to the series. Hence, my final verdict will clock in at 4.5 stars, rounded up to 5 for the purpose of this platform.

You can get these scaling feats here on OBS and here on d20pfsrd.com’s shop!