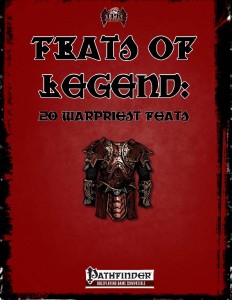 This pdf clocks in at 6 pages, 1 page front cover, 1 page editorial, 1 page SRD, leaving us with 3 pages of content, so let’s take a look!

-Extra Blessing: +1 BLESSING. Not “use of a blessing”, full-blown blessing – minor + mayor. This is very powerful.

-Project Aura: Expend fervor as a full-round action to project aura as a 15-ft.-cone and treat your warpriest level as twice as high for the purpose of stunning creatures, for they are treated as if they had cast the appropriate detect spell and studied you for 3 rounds. Thankfully, a Will save can prevent that and reduce the effect to shaken.

-Greater Project Aura: Expend more fervor to increase the duration of the stunned/shaken effect and also increase the save DC. The DC-scaling per fervor point feels a bit high to me – +1 round at 2 uses of fervor, why not also go for that with the DC? Stunned is pretty much save or suck, so I don’t think this would be weak.

-Greater Sacred Armor: Enhancement increases by +1 for a maximum of +6.

-Improved Sacred Weapon: Treat sacred weapon as if your warpriest level was +1 higher, +1 at 5th level and every 5 levels thereafter. I *assume* this refers to the level-based sacred weapon base damage progression; If it does, it ought to have specified that it does not apply to the enhancement-bonus scaling inherent in the base ability, since that one also improves damage.

-Greater Sacred Weapon: Increase enhancemnet bonus by +1 to a maximum of +6. See, this one sports no ambiguity.

-Insightful Strike: Substitute Wis-mod as atk-governing attribute instead of Str or Dex when using the deity’s favored weapon.

-Ranged Fervor: Use fervor at 30 ft. range, requiring touch attacks – see, this one is pretty awesome and concisely presents a downright awesome option!

-Sacred Armor Flexibility: Expend fervor as a move action to switch the armor enhancement on your sacred armor. Nice!

-Summon Raiments: This summons forth armor/weapons for “divine energy” – does that mean channel energy? Fervor? No idea. Non-functional as written.

-Zealot’s Strike: Expend 2 fervor tod eal max damage on the next successful attack, +4 to crit confirmation rolls. Why not limit the maximum to base weapon damage? As written, it can pretty easily be cheesed.

Editing and formatting are good, but not perfect – from the mentioning of the bogus “divine energy class ability” to lower caps “dc” and similar small glitches, the pdf does sport some minor hiccups. Layout adheres to TPK Games’ parchment-style two-column standard and the pdf has no bookmarks, but needs none at this length.

Brian Berg and P.J. Harn deliver a solid expansion of warpriest feats that do deliver some much needed flexibility. The feats skirt the line from solid to absolutely awesome – the ranged version of fervor is a pretty genius adaption of the ranged channel-ray alternate rule from the cleric reforged and the added flexibility for sacred armor/weaponry is cool. On the other hand, the offensive aura feats left me rather unimpressed and there are some minor quibbles in editing and wording and some minor balance concerns that drag down the pdf. In the end, we are left with a solid little pdf that is slightly above average and definitely useful for warpriests. Hence, my final verdict will clock in at a solid 3.5 stars rating, rounded down to 3 stars, mainly because not enough feats blew me out of the water and due to some of the editing/wording being pretty subpar.