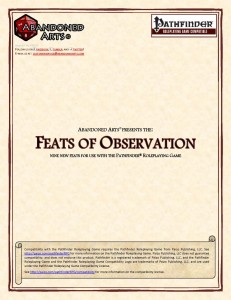 -Assassin’s Eye: Study foes faster for death attacks and potentially delay executing the death attack by up to 5 rounds. Nice one!

-Stonesense: As a full round action, get tremorsense 5ft for a round – I LOVE this one – rather iconic and cool!

-Improved Stonesense: Instead gain Wis-score feet tremorsense, rounded down to increments of 5 – neat!

-Investigative Tracker: Glean information from crossing tracks – including a round by round description of combat, if one happened. Cool for investigative characters!

-On my command: Allies that ready action for you to give the order to attack get +1 to atk and damage. The bonus is untyped, but does not stack with itself. Nice for commander-type characters, if perhaps a bit strange on the power-scale – I would have expected a maximum number of allies that can benefit from it or a scaling bonus.

-Reconnoiter: Ignore 10 ft of perception-penalties, plus 10 ft for every two ranks in perception you have. Neat for scouts!

-Scout’s Eye: +Int-mod to Perception and Sense Motive when observing flat-footed foes unaware of your presence. Okay, though I’m not a big fan of multiple attributes being added to one skill.

-Sensory Joining: Extend a limited form of bond sense to summoned creatures, which takes 1 minute and is at -10 – but still so full of potential, it’s awesome. The storytelling potential for NPC-masterminds is boundless, as is the one for PC-scouting without being overpowered since summons lose quite a bit of their duration. Neat!

-True Disbeliever: When passing 10 ft. by an illusion, you may disbelieve it without interacting with it.

Editing and formatting are top-notch, I didn’t notice any glitches. Layout adheres to a two-column no-frills, landscape standard and the pdf doesn’t have any bookmarks, but needs none at this length.

Observation-feats could have been boring. Could have. Instead we get a collection of feats that contains some true winners (especially for “brainy” investigator-style characters and scouts) and can be considered well done indeed. The feats are interesting, open some cool options and should be considered welcome additions to your game. Add the more than fair price and we get a package that is well worth the low asking price and a final verdict of 5 stars.

You can get these feats for less than a buck here on OBS and here on d20pfsrd.com’s shop!