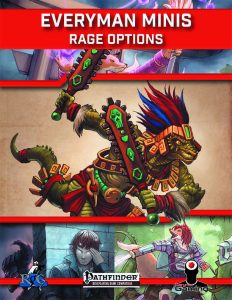 This Everyman mini clocks in at 6 pages,1 page front cover, 1 page editorial, 2 pages of SRD, leaving us with 2 pages of content, so let’s take a look!

All right, on the introductory page, we already get 2 different feats that deal with the new instinct rage powers. What’s that? Something amazing. An instinct rage power may only be used while NOT raging. Why are they called “rage powers” then? Simple: Using them costs a number of rounds of rage. If applicable, the save DC of such a rage power is equal to 10 + ½ class level + Constitution modifier. The first of the feats interacting with this concept would be Perfected Instinct. This lets you choose one instinct rage power. When using that one, you count as having spent +1 round of rage beyond the rounds actually spent. It may be taken multiple times, applying its benefits to other instinct powers. The second feat, Waking Instinct, can also be taken multiple times and allows you to use a chosen instinct rage power while raging.

A total of 9 such instinct rage powers are presented herein: Bout of blows can only be taken at 10th level and higher and lets you spend 6 rounds of rage for an additional attack as part of a full attack – to prevent a complex cheese, it does come with a brief cooldown penalty to atk. Draw ferocity allows for the spending of rage as a swift action to incite rage in the target: In a unique twist, this does allow the target to benefit from bloodrage, rage, etc., allowing for a unique synergy here. And yes, sensible minimum level. Draw frenzy also interacts with this notion: Targets under rage, bloodrage or raging song may be confused by this one! Frenzied blows lets you spend rage to enhance damage (using ½ class level as a cap), and innate speed may be employed as part of using a move action, adding to the movement rate. Unique here: Sans fast movement, you can’t take this one!

Instinctual save makes you choose Fortitude or Reflex saves, and whenever the barbarian fails a save of the chosen type, they ay spend rage to reroll it, with number of rounds spent denoting a bonus to the reroll. This is an immediate action and thus has a tactical, balancing component – and it may be taken again to apply its benefits to both saves. Reactive defense allows for immediate action rage burning for dodge bonuses to AC; reactive instincts allows for the improvement of initiative, and reactive rage lets you initiate rage as a consequence of a failed save.

Editing and formatting are top-notch, I noticed no glitches. Layout adheres to the artwork-bordered two-column full-color standard of the series. The new artwork provided is cool. The pdf has no bookmarks, but doesn’t need them at this length.

Luis Loza delivers big time here. With this, you can play a barbarian that focuses on NOT going into rage, and if you’re bored on the one sequence (“I rage” -> “I do xyz”), then this book makes your barbarian actually more versatile, play more like a 2-mode-character. I love what this does with the engine. My only complaint here would be that this could have been a great angle for a full-blown barbarian redesign! Anyhow, this is a great mini, well worth 5 stars + seal of approval. Well done!

You can get these cool “anti-rage” rage powers here on OBS!