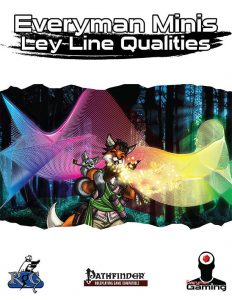 In case you were wondering – this book expands upon Occult Adventures’ ley lines rules and thus presents the Ley Line Adept feat, which nets a Spellcraft-bonus as well as a Dowsing skill unlock means of 1/day finding ley lines, making them more accessible. The process of “findings”[sic!] ley lines via such rods is covered and concisely presented with DCs and all- no complaints there.

The pdf then goes on to present 9 different types of ley line: Alignment-ley lines tap into the corresponding plane’s planar traits (really elegant solution there!), while corrupted ley lines can spawn hazards, once again tapping into the general mechanics and codify these threats concisely via CR. Elemental ley lines increase spell save DC and CL accordingly, while manifest ley lines can be found with the naked eye. Restricted ley lines would be the first to really blow me away – you see, these can only be accessed via certain criteria – items, classes, being born under a special sign…and while UMD may be used to circumvent this, it’s not an easy task and remains rather flavorful. Specialized ley lines enhance certain schools or subschools, increasing the CL.

Sylvan ley lines make magic harder to resist for animals and plants, while wild ley lines have their caster level modified by 1d4-2, potentially wasting spells…oh, and for fans of the phenomenal Microsized Handbook will love microsizing ley lines – which may affect some, all…or only specific beings in their vicinity…

Editing and formatting are generally very good (with the typo-exception mentioned) on both a formal and a rules-language level. Layout adheres to Everyman Gaming’s nice 2-column standard, is printer-friendly, and I appreciate the full-color artwork for the supplement. The pdf comes without bookmarks, but needs none at this length.

I like Matt Morris’ expansion of ley lines as a system, I really do – but at the same time, to me, it feels pretty basic. Yes, I know. It’s a niche offering. But I couldn’t help but feel like the ley line engine offers more. I expected a bit weirder material and while this brings ley lines as a system up to the level that I wanted from the base engine, it does not go beyond that. If you’re like me, you have probably seen a bunch of ley line engines at this point and I am glad that Everyman gaming released this and expanded Occult Adventure’s take on the concept. At the same time, I do feel like another page or two with stranger qualities would have helped this pdf.

That being said, if you’re like me and were left wanting more from Occult Adventure’s ley line-engine, then consider this a must-own offering. This is good, well-made and fun – and as such, deserves a final verdict of 4 stars.