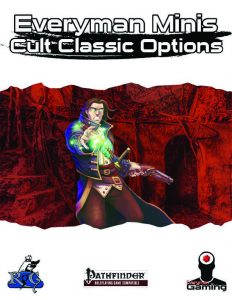 This installment of the Everyman Minis-series clocks in at 7 pages, 1 page editorial, 1 page front cover, 1 page advertisement, 1.5 pages of SRD, leaving us with 2.5 pages of content, so let’s take a look!

The pdf contains two new archetypes, the first of which would be the chosen guardian brawler, who replaces martial training, awesome blow and 2nd + 8th level’s bonus feats with ordered training. The chosen guardian treats brawler levels as fighter levels for the purpose of prerequisites and magic items. The character gains a cavalier order, but is locked into the order of the North…her…sorry “Eastern” Star, treating class levels as cavalier levels. And yes, multiclass order interaction is covered. The archetype is proficient with simple weapons, hand crossbow, whip, close weapon group weapons as well as light armor. Additionally, all light weapons they’re proficient with are treated as close weapon group weapons for the purpose of brawler’s flurry and close weapon mastery. If the character has Catch Off-Guard or Improvised Weapon Mastery, then improvised weapons similarly are treated as belonging to the close weapon group. If the character has Throw Anything or Improvised Weapon mastery, then improvised ranged weapons are treated as such as well – this is a pretty hefty delimiter, but to kind of make up for it, the archetype may not use monk weapons in conjunction with brawler’s flurry, unless they also belong to the close weapon group.

Instead of the AC bonus, 4th level yields a +1 bonus to saves vs. mind-influencing effects, which improves at 9th, 13th and 18th level by a further +1. Also at 4th level, the chosen guardian may 1/day execute a devastating blow that must be announced beforehand. An undead creature, or one with one or more supernatural attacks hit by the strike mus succeed a Will-save versus DC 10 + ½ class level + Str or Dex mod, whichever is higher) or be dated for 1d6 rounds, with the chance to shake off the effect with another save as a full-round action. Incorporeal creatures only have a 50% chance to be affected, unless delivered via ghost touch. At 10th and 16th level, we get another daily use. This replaces knockout. Nice take on the Fist of the North…her…East Star, I guess.

The second archetype herein would be the doomsday survivalist ranger, who loses wild empathy. He does get ½ class level to Survival and +1 to saves vs. disease and poison, increasing the bonus by +1 at 6th level and every 4 levels thereafter, modifying the track class feature’s usual effects. At 7th level, instead of woodland stride, we get doomsday bunker. This is a safe house that blocks effects less powerful than discern location (not italicized properly) and its walls block blindsense and blindsight and derivative senses à la lifesight, Starting at 13th level, the structure is affected by private sanctum. It may only be established in favored terrain and requires 1 week to establish. If neglected for a week, you can create a new one.

There are 4 new feats included: Enchantment Alertness nets you a Sense Motive check when within 10 ft. of an enchantment effect on a creature. This may btw. be taken as a 3rd level investigator talent. Medical Expert increases the amount of healing provided by Heal checks to treat deadly wounds by the amount the DC was exceeded. Sound Sleeper is cool: It allows you to sleep lightly, you have an easier time noticing stuff; if you sleep normally, you heal more. Nice! Stoic Perseverance nets +2 to Fort-saves vs. disease and poison and increases the DC to intimidate you by +2. You also ignore bonuses to Intimidate based on opponent size.

Editing and formatting are precise and well-crafted on both a formal and rules-language level. Layout adheres to the printer-friendly two-column standard of the series and the artwork provided is nice. The pdf has no bookmarks, but needs none at this length.

Matt Morris delivers some nice class options here – I enjoyed the content within, and it particularly makes sense for wasteland/post-apocalyptic scenarios, though definitely not exclusively so. All in all, I enjoyed this pdf – it’s well worth a final verdict of 4.5 stars, and while I liked the brawler-tweak very much, I was slightly less blown away by the survivalist components, which feel a bit more generic to me. Hence, my official verdict will round down.