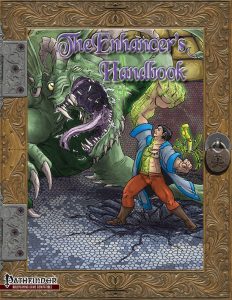 This installment of Drop Dead Studios’ expansion-books for Spheres of Power clocks in at 28 pages, 1 page front cover, 1 page editorial, 1 page ToC, 1 page SRD, 1 page back cover, leaving us with 23 pages of content, so let’s take a look!

All right, after some introductory prose and advice on navigating this book, we begin with a selection of archetypes, the first of which would be the Herculean Scion for the mageknight, who replaces 1st level’s magic talent with a domain power of a domain of her choice, with 2nd level increasing the CL to class level for enhancements that target the scion – in short: Full CL-self-buffs. 7th level replaces marked with immunity to all poisons and diseases, with 11th level providing DR 3/- that improves every 4 levels thereafter by 1, replacing mystic defense. As a capstone, self-targeting enhancements instead last 24 hours and nets an outsider apotheosis.

The wizard may elect to become an eclectic researcher and is considered to be a high caster, with a spell pool of class level + Int-mod points, 2 magic talents every odd level and 1 every even level, with 1st level netting the Spellcrafting and Create Spellbook feats as well as the focus casting drawback with the spellbook as the focus. This spellbook is known as a researcher’s notebook and 1/day a spell cast from it may be reduced in complexity by 1, with 10th and 18th level providing further decreases in complexity. Here’s the deal, though: The archetype receives so-called name-bound spells that only the archetype may properly cast, gaining the option to enhance such spells in special ways, allowing for the application of enhancement of magically duplicated weapons or armor generated via spells. This…is at once awesome and ridiculously strong in the hands of a system-savvy player. That being said, it is also a very creative and potentially very rewarding exercise for experienced players. The wide-open nature of the engine thus created can result in the requirement of GM-calls here, though that is the consequence of a system-inherent property and not necessarily the fault of the archetype.

The snake-oil salesman replaces sneak attack with being a low caster as well as class level + Cha-mod spell points, with enhancement as a bonus sphere at 1st level and magic talents at 3rd level and every 2 levels thereafter. Trapfinding is replaced with bonuses to Appraise and Bluff. The enhancements of the class can be delivered via pills or oils to creatures and weapons, gaining the special delivery drawback. 4 special rogue talents allow for lingering effects, better magic and poisoning. Personally, I would have liked the concealing poisons talent to specifically state its DC without requiring the looking up of the precedence, but that is a minor and cosmetic inconvenience that stems probably from me not exclusively playing with the spheres system. 5th level replaces uncanny dodge with Brew Potion, allowing for once again, complexity modifications. It should be noted that “primarily Enhancement effects” is pretty wobbly as far as rules-verbiage is concerned. That could have been solved more elegantly. Higher levels net quick pill-swallowing and resilience versus negative side-effects, with the capstone providing some fun options to really sell prouct.

The spirit-wielder fighter replaces bravery with the option to awaken one weapon, which proceeds to gain the Enhancement sphere at 3rd level and the weapon’s Cha-mod as spell pool. The weapon may select a casting tradition and receives additional magic talents at 7th, 11th and 15th level, replacing armor training. 5th, 9th and every 4 levels thereafter and 17th level enhance the weapon’s resilience, with 19th level further enhancing the weapon. As a capstone, the awakened weapons are resurrected alongside the character and are part of the being for these purposes and the weapon may not be disarmed…and the character may 1/round take 10 for an atk with it. The final archetype would be the whitesmith armorist who replaces summoned equipment with the Enhancement sphere and treats the full character level as CL for object enhancement. Special qualities may also be applied from enhance equipment thus by the archetype, with +1, +1 at every 5 levels. Instead of bound equipment, the bonus further increases by +1, with 7th level and every 4 levels further enhancing the bonus. 5th level allows the whitesmith to repair broken objects and adds a further weapon affected, +1 object affected at 10th level and every 5 levels thereafter. 19th level allows for swift action concentration on enhancement, with the capstone allowing for spell point expenditure for doubling the number of additional objects affected – basically, a god-weapon-smithing one.

The pdf also contains a significant array of new basic talents that allow for the increase of the potency of poisons, optional spell point expenditure for more enhancements when using options that allow for multiple options…which can be a bit weird when interacting with class/archetype abilities that add additional benefits. A bit of clarification for such interactions would certainly be appreciated. Temporary reduction of fatigued/exhaustion conditions and there are more than a few similar…well…enhancers. From better movement to generating a magical sink as a kind of dispelling buffer to finally, an option to render items more fragile or adding bleed effects to weaponry – the array is generally solid. 4 advanced talents are also included, one of which lets you employ aegis and enhancement not suppressed by antimagic, one to go ascetic via spell points, one to grant temporary sentience via Embodiment of Magic to non-instantaneous effects – this would btw. be a pretty complex template with a CR-enhancement of 2/3 HD, +1/4 potency that allows for the creation of critters based on spells…which is VERY cool and may make this, scavenging-wise, pretty worthwhile even if you’re not that interested in SoP.

Regarding somewhat problematic options: I generally like how referential enhancement makes enhancements acts as bursts for +2 spell points…the question remains, though, if such bursts can enhance options that are defined by self-only targets and enhanced thus. Would a herculean scion’s enhancements of his tricks potentially be expanded? Do the class abilities or the talents take precedence here? It’s these interactions where the system obviously could have used some slightly more precise notes, since it’s not 100% evident which takes precedence.

A total of 3 incantations, from talking to locks to making statue servants or forming stone as clay, these are pretty amazing. Kudos! The feats are arguably the crunchy heart of this installment of the series: Two feat categories are introduced here: Drawback feats allow for taking alternate benefits from drawbacks, which is amazing, as it allows for further customization and differentiation between crafted traditions. These include interaction between addiction and enhancements, bonuses to MSD for slower and more deliberate casting, etc.

Secondly, there would be the category of proxy feats, which builds on enhanced creatures acting as Circle Casting candidates, manipulating the respective proxy enhancements build upon that feat’s effects – basically, via these feats, you can gain, for example the option for a proxy expending an immediate action to get you a reroll, etc. These basically are a bit like a chopped up tactician/collective-generating archetype…interesting, though I think the engine would have perhaps worked better in the context of an archetype…but that may be me. The other feats contained herein also represent some serious gems – extended options for making weaponry aligned, multiple expansions for animated objects and shapeshifting enhanced objects is similarly cool…though this one needs some system-mastery and sports a component that could use a bit clarification: The enhancement becomes a shapeshift, I get that, but do class abilities and talents modifying enhancement apply? Those that modify shapeshift? Both? The interaction is a bit problematic here – not to the point where the material doesn’t work, but to one where I can easily construct cases where the interaction becomes somewhat opaque. I also couldn’t find Fate Magnet in either the book or SoP, so not sure whether this is an option that will be released to the public in the future.

Very cool: A total of 9 different sphere-specific drawbacks can be found within these pages, with 2 new boons included as well – a total of 6 traditions have been tailor-made for the book as well. The pdf concludes with the bestiary-section, which includes truly ginormous colossal items, from colossal+ to colossal+++, CR 12 to 16, 3 sample embodiments of magic and a whole section that expands the animated object section with special material, notes on animating structural features and several new abilities and flaws for the respective items.

Editing and formatting are good in both formal and rules-language levels. Layout adheres to a 2-column full-color standard and the pdf has a decent blend of stock and original pieces. The pdf comes fully bookmarked for your convenience.

Marcus Dirr didn’t have an easy task here – Enhancement is simply not as “sexy” as a concept as some other themes for Sphere-handbooks and he did a more than valiant job, focusing on some interesting rules-operations. The feats contain some seriously intriguing gems and the focus on spell customization is cool. The magical embodiments are pretty amazing as well…but in this pdf, more so than in previous handbooks, it becomes pretty evident that the SoP-system, when not handled very carefully, can easily result in some glitches in the interaction between the highly modular components. This does not make this a bad book in any way, but it makes it an installment that could have used some further streamlining. As a result, my final verdict will clock in at 3.5 stars, still rounded up due to in dubio pro reo.

You can directly support Drop Dead Studios making more of these books here on patreon!