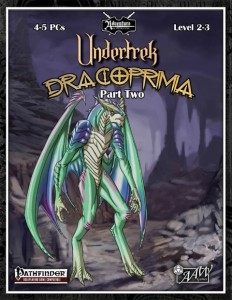 The second installment of the Dracoprimia AP clocks in at 25 pages, 1 page front cover, 1 page editorial, 2 pages of SRD, 1 page back cover, leaving us with 20 pages of content, so let’s take a look!

All right, still here? We rejoin our heroes and the draaki Verja (recently saved from his forced employment as a curiosity in a circus) on their trek towards Verja’s home – in a nice sense of continuity, PCs doing well in the first installment can witness the fruits of their labors – the better they performed, the more discount they’ll get when shopping for supplies, potentially even getting the adventuring gear of Zhira Medved. Thus, the unlikely travelling companions travel across the Klavekian plains (complete with random encounters table) to the Silent Forest, the domain of the elves. The xenophobic, isolationalist people thankfully know of the prophecy that sent Verja and thus allow for safe transit….but only after issuing a warning: A vikmordere hunting party has pursued a wooly rhinoceros into the forest and the wounded, powerful beast has been wrecking havoc in the forest – and indeed, in the evening, the dangerous creature, half-blinded, stumbles into the PC’s camp – but will they jeopardize their role in the prophecy to finish the half-blinded beast, which is, in spite of its wounds, a highly dangerous adversary? Or will they leave the elves to a brutal fight? Slightly odd – I don’t get why there’s a (nice) mammoth-artwork here.

After some more traveling, the PCs can find the fungal entry to the rhizomorph road into the underworld, to be more precise, into the Grey Liana jungle of vast fungal proportions (fully mapped). Once again, this unique environment does sport random encounter-tables…and acid puddles. PCs better watch their step to avoid trudging into nasty, corrosive puddles and fungal caps. And if that were not bad enough, the jungle is haunted by vegepygmies (with lavish artworks), which consistently try to kill/abduct PCs while they trespass in their terrain. Whether the PCs elect to try to eliminate the vegepygmies for once and for all (destroying the village requires taking care of the mold, obviously – though this aspect is left pretty opaque) or not, they will have to cross the boiling river that bisects the subterranean jungle. Once again, unique hazards are provided here.

The final stretch of the journey takes the PCs through tunnels named lava vents – once again, sporting nice artworks, unique hazards and a random encounter-table, providing a solid player-map and a GM’s map of the vents. We end this module with the PCs en route towards the Drage caves, towards their destiny. I wondered why there was no player-friendly version of the fungal jungle’s map, though.

Editing and formatting are very good, I noticed no glaring issues. Layout adheres to the beautiful 2-column underworld-series-standard, mirroring the location of this module – nice! The pdf’s artworks are unanimously beautiful full-color and a joy to look at. The cartography is generally top-notch, though the player-friendly version of the magma vents-tunnels is “only” good. The pdf comes fully bookmarked for your convenience.

Mike Myler’s Undertrek is a fun trip through the underdark to read through – the larger obstacles usually have more than one solution and the pdf covers a lot of bases, so that’s nice. I also enjoyed the significant array of hazards herein – kudos for making the undertrek feel alien and unique. This is a nice overland journey in the underworld and it oozes alien vistas, dangers, etc. – atmosphere-wise, Undertrek is a great module to read. At the same time, though, playing it confirmed my fears – it does fall flat of its premise. While not as railroady as “Into the Green,” there is still not much active choice here. And yeah, sure, that’s somewhat inherent in the structure of a journey. But e.g. the superb “Twin Crossings” still did that aspect more modular, put player agenda higher on the priority list. Basically, we have two BIG locations (fungal jungle + magma vents), and in both, there is not much to discover – no hidden tomb, no remnants of explorers, no veins of ore or unique plants etc.

As wondrous as the locations are, as sterile do they feel when the players scratch the surface. What do I mean by this? The magma vents have three tunnels leading through them – 3, to be precise. What your PCs don’t know: Their choice here doesn’t really matter. The adventure continues as intended. What if the PCs go off the rails and look for exotic shrooms in the jungle? After all, other AAW Games-modules sport numerous wondrous shrooms? None to be found here. Now you can counter that by saying that Verja can steer them back on track, sure. That opens another problem, though: It is predicated on Verja being more than a story-facilitator, predicated on him being an ally the PCs come to cherish and talk to. The problem here is that the GM is left in the dark regarding Verja’s task. Information on his enclave, the festival, the prophecy, his role beyond securing the PCs, even the route he took when he went to the surface? Nope – nothing. Verja is a black story hole that can frustrate those who want to know him and generates undue paranoia that resulted in one playtest group trying to abort the whole deal – I had to tell them out-game to get back on the railroad, for nothing in-game could have salvaged that. I am GOOD at BSing explanations and the like on the fly, but the slow, deliberate pace and the lack of information exacerbate the issue to highly problematic levels.

Basically, this module can go two ways: If your players jump on the train and don’t rock the boat, this is a wondrous, exciting journey. If they are like mine and want to poke environments, look for the hidden bonus treasures and really interact in-depth with everything…well, then you’ll have issues. Both Verja and the environments, as awesome and wondrous as they may be, ultimately remain pretty shallow, perhaps, though not necessarily so, due to the brevity of this module. Overall, it feels like this adventure should have taken more time to develop the wondrous surroundings – after all, the upperworlder PCs *WILL* want to interact with the jungle; they will want to get the most out of these locales.

Undertrek can go off as a great, if a bit brief overland journey…or turn into a complete mess that is frustrating, if certainly not particularly taxing, to GM. I’ve had both happen. Hence, my final verdict will clock in at 2.5 stars, rounded up due to in dubio pro reo 3 stars – in spite of the cool environs, I just can’t go higher.

You can get this evocative, but very flawed module here on OBS!